Is the Indian real estate market overheated? Yes, says Ali Lokhandwala, Director, Lokhandwala Infrastructure. “The market is definitely inflated and there will be a softening of prices, though I don’t foresee a crash because there is a lot of liquidity,” he asserts.

Is the Indian real estate market overheated? Yes, says Ali Lokhandwala, Director, Lokhandwala Infrastructure. “The market is definitely inflated and there will be a softening of prices, though I don’t foresee a crash because there is a lot of liquidity,” he asserts.

Which could explain why every major and minor league builder is in a tearing hurry to invest in overseas projects. Lokhandwala, whose company was among the first to venture into the real estate market in Dubai, feels that given the current scenario, it makes ample sense to spread one’s portfolio and hedge risks against any possible uncertainty in the Indian market. “There’s also the fact that the real estate market in Dubai is all set to boom considering that expatriates are now eligible for home loans,” he adds. 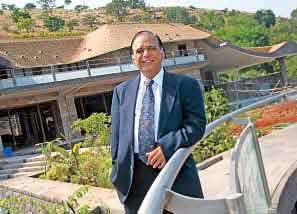 Lokhandwala Infrastructure, which already has a million square feet under development in Dubai through its three residential properties, is now scouting for land in the UK market. “We are looking at an acquisition with an initial investment of Rs 50 crore, which is most likely to be in the suburbs,” he informs. He adds, though, that margins in the UK are not very lucrative. China is another option for Lokhandwala. “It presents another great opportunity and the only concern there is the language barrier,” he muses.

Across the Atlantic, in the US, it’s Pune’s D.S. Kulkarni Developers that ventured into real estate development earlier this February. “Contrary to popular belief, there’s plenty of opportunity in the US, especially in areas like Seattle and California. You need to identify markets that are not saturated— it would be stupid of me to venture into a market like Florida, which is faced with a crisis of an oversupply,” points out D.S. Kulkarni, Chairman & Managing Director, D.S. Kulkarni Developers, dismissing any fears of an impact of the subprime crisis that has hit the US realty market.

His strategy: Identify markets where there is large-scale white-collar migration and touch base there. “Even in India, the major construction boom is limited to 8-10 cities where there is new migration,” he observes. Kulkarni has invested $60 million for 16 acres of land in and around New Jersey for developing 11 family villas, costing $1.5 million apiece. Kulkarni’s next stop: Melbourne, Down Under. And judging from the developments taking place, it won’t be long before home-grown players find new turf to play their game.