Going with the wind

The year is 2003: After a few tough years, Tata Motors and Tata Steel are back in the limelight because of their respective turnarounds. Tata Motors has been on a cost-cutting drive in the last three years, in the process shaving off Rs 1,000 crore on that front.

Volumes of vehicles sold have jumped 30 per cent. Tata Steel becomes the cheapest producer of steel in the world, and has declared a record profit of Rs 1,012 crore (for 2002-03). The top 12 companies of the Tata Group are contributing over 80 per cent of the group’s turnover and profits.

Acquisitions on the domestic front are on in right earnest, with the group spending $737.1 million in acquiring stakes in Indian companies in 2002 alone. Ratan Tata, you would think, is content. 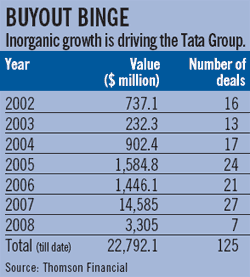 Not quite. Chastened by the downturn in local markets in his flagship businesses, Tata wonders how the risk of a domestic slowdown could be successfully countered; also the Tata Group is a colossus back home, but is it significant enough overseas?

After all, other than TCS, which at that time was responsible for 20 per cent of group revenues coming from abroad, the Tatas lacked any presence worth mentioning in global markets. The first overseas Tata office was established in 1907 in London, followed by Tata Inc. in New York in 1956; but that hardly made the Tata Group international. By 2003, however, Tata knew it was time to make globalisation a key strategic imperative for some of the key companies.

The Group Corporate Centre (GCC), which is the decision-making body that defines and directs the business endeavours of the Tata Group, focussed on creating, monitoring and driving performance through various strategies. Members of the the GCC, which comprises Ratan Tata, J.J. Irani, Arun Gandhi, R.K. Krishna Kumar, R. Gopalakrishnan, Ishaat Hussain, N.A. Soonawala, Kishor Chaukar and Alan Rosling, have been actively involved in the group’s gobal M&A initiatives. Result? A spate of international acquisitions, right from Tetley Tea in the UK, Daewoo CV in Korea, Anglo-Dutch steel giant Corus to, last month, two of the world’s most famous luxury car brands, Jaguar and Land Rover.

According to Thomson Financial estimates, since 2002 the company has spent close to $22.8 billion in acquiring stakes in 125 companies, both domestic and international, and shelled out another $229.49million in deal fees alone. According to Premal Parekh, Partner and Head of Mergers & Acquisitions (M&A), Ernst & Young, the $50-billion (estimated revenues March 2008) Tata Group has already started behaving and acting like a global company. “In another five years, apart from the management leadership, most of the group would have a global profile,” Parekh says. Already 37 per cent of the group’s turnover is coming from overseas markets.

Of course, the biggest challenge for Tata is to make the big-ticket acquisitions work. After all, as Thomson Financial data reveals, there’s plenty of debt that needs to be paid off—total debt financing since 2002 stands at $27.8 billion.

“One of the biggest challenges that the group might foresee in the near future is integrating the recent acquisitions into its various businesses. A lot also depends on how the global situation unfolds as the credit crisis in the US market might have some impact on some of their businesses,” adds Parekh. The challenges notwithstanding, it’s evident today that the Tata Group has emerged as an Indian multinational on the global stage.

From Khanna to Roshan