M&M eyes more auto segments, and more markets. he company is likely to launch the Scorpio in the US through a Georgiabased distributor named Global Vehicles.

Last fortnight, even as Mahindra & Mahindra (M&M) announced that it had formed a joint venture in China with a Chinese tractor major—this is the company’s second tractor venture in that country— there was perhaps more excitement centred on its automobile arm, and the shape it promises to take. M&M may be in talks to buy out the Hummer brand from GM. On the other hand the company is being sued by Chrysler for allegedly copying the design of Chrysler’s Jeep for the front grill of Mahindra’s Scorpio. 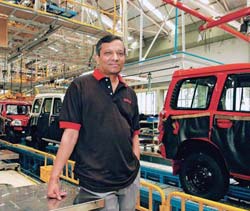 M&M’s Goenka: What’s up his sleeve?
This comes just as plans for launching Scorpio in the US are being made. The company is likely to launch the Scorpio in the US through a Georgia based distributor named Global Vehicles. The vehicle may be assembled in Ohio and re-branded as the Mahindra Appalachian.

Chrysler and M&M are also locked in another battle over the brand Jeep in South Africa; the American major complained about the use of the word ‘jeep’ as a generic term by M&M in an advert.

M&M had started off in 1945, manufacturing the Willy’s Jeep under licence. As recently as January this year, the Mahindras were reported to be in talks with Chrysler for buying out the Jeep manufacturing unit.

That M&M has been on the prowl globally for auto assets became evident when it joined the race to buy out the Jaguar-Land Rover combine, only to lose out to the Tatas. The Tatas are reportedly also in the race for the Hummer.

Says Pawan Goenka, President (Automotive Sector), M&M: “The first product that we will launch in the US will be a pick-up. We also plan to launch the Scorpio in the US in the second half of next year followed by other products.” While he refuses to comment on talks with GM about the Hummer, Goenka adds: “We are always open to acquisitions, and we always look out for possibilities.”Mahindra already sells tractors in the US market.

Meanwhile, M&M has bought the assets of Kinetic Motor Company for Rs 110 crore to mark an entry into the two-wheeler segment. Mahindra may also choose to augment capacity inorganically, which has had punters on Dalal Street betting on M&M bidding for the assets of ailing two-wheeler company LML. A Mahindra spokesperson refused to comment, but Mahindra’s auto game plan may well have some more surprises in store.