India once more for MIT

The International Innovation Initiative (I3 or I-cubed) will make it easier for researchers at MIT to get venture funding for their projects. According to Hockfield, the initiative aims to help address world problems such as climate change.

She came here to start a ‘conversation about the future” of Massachusetts Institute of Technology (MIT) and India, and ended up kick-starting what could prove to be more than just talk. Susan Hockfield, MIT’s first sitting (and new) President to visit India, unveiled two initiatives that will further strengthen the relations between India and America’s bestknown technology institute. 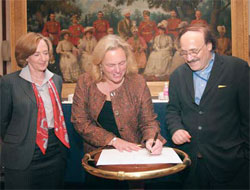 Hockfield
The International Innovation Initiative (I3 or I-cubed) will make it easier for researchers at MIT to get venture funding for their projects. According to Hockfield, the initiative aims to help address world problems such as climate change, energy and the environment. “I3 is intended to work with international partners to identify research projects that could lead to the formation of new companies, connect researchers to local and global venture capital networks, and develop courses for students that address technological innovation and market strategies,” Hockfield told BT.

The interesting thing is that I3 is fashioned after the Deshpande Center for Technological Innovation, which was founded with an initial donation from Indian technology entrepreneur Gururaj “Desh” Deshpande and his wife Jaishree. Founded in 2002, the centre has so far funded 68 MIT research projects with around $8 million in grants. Eleven projects have been spun out of the centre as start-ups, and they have collectively raised more than $90 million in external funding.

The other initiative launched by Hockfield in India is a partnership with India’s Biotechnology Department that will result in the creation of a new Translational Health Science and Technology Institute (THSTI) in the country. The institute, which will be modelled after the Harvard-MIT Division of Health Sciences and Technology, will include faculty from multiple disciplines and professions and offer degrees through multidisciplinary programmes. According to Hockfield, “Launching this new partnership will build on HST’s pioneering model of medical education that integrates science, medicine and engineering to solve problems of human health.”

The institute, which will be funded by the Indian government, is intended to increase India’s capacity for translating scientific and technological advancements into medical innovations that have the potential to improve healthcare, both in India and around the world.

The last time MIT partnered with the Indian government it was to create Media Lab Asia, which proved to be a disaster—purely for political reasons. Let’s hope THSTI meets with a better fate.