It's a health check, mate

Are Indian exports to the US safe and of good quality? 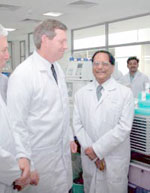 Leavitt (l) and DRL’s Reddy
Michael O. Leavitt is a man with a mission—and it’s not the most common of missions. The Secretary, Department of Health and Human Services (HHS), US, has been touring the world for the past seven months, ever since President George Bush told him to pack his bags. Leavitt’s mandate is to examine and improve the US ‘importing practices,’ right from the beginning of the manufacturing process all the way to the customer.

Leavitt, it would seem, has seen it all. “I have visited sea ports and border crossings, and facilities like this apart from ginger bread-making shops. Our message is clear: Those who desire to produce for American consumers will produce in a way that will meet our expectations of quality and safety.”

If quality and safety have become concerns in the US, it’s with good reason. More and more of what Americans consume is produced in other countries. “We now have $2 trillion worth of goods that are produced outside the US and imported for use by our consumers,” says Leavitt. He feels the US currently has a good system of monitoring standards. But it may not be adequate for the future. Which is why he says it is time to redesign the system. “We have made a very basic change in the way we approach our imports. Rather than stand on our borders trying to ensure that things are safe, we want to build quality into the product at every step. We intend in the US to make it easier for those who maintain quality and difficult for those who don’t.”

To this end, he is keen to open a dialogue with the Indian government on how the two countries can collaborate. It appears as though India and the US are moving closer to setting up joint mechanisms to ensure common food and drug safety regulations on the lines of the US Food & Drug Administration (USFDA). The step would make it easier for Indian companies to export to the US and elsewhere. The US seems willing to help out India with all the technical assistance. This comes close on the heels of reports of an announcement by Union Health Minister Anbumani Ramadoss that India intends to have a drug regulatory body modelled on the lines of the USFDA.

The USFDA commissioner, however, put to rest speculations about the regulatory body’s plans to set up office in India. He clarified that there were no plans to open an office of the US regulatory body in India. Leavitt did not identify any single country when it came to concerns over standards. But of late, the US appears to be worried about the quality of imports from China, a country with which the US has now concluded agreements both on foods and feeds as well as on drugs and devices.