Robbie Bach, President, and Devices Division, Microsoft has an interesting job. While the rest of the company makes money selling software, Bach’s job is to transform Microsoft into a consumer electronics company as well. And he’s had some luck.

The tech giant’s Robbie Bach wants to best the iPod.

Robbie Bach, President, and Devices Division, Microsoft has an interesting job. While the rest of the company makes money selling software, Bach’s job is to transform Microsoft into a consumer electronics company as well.

And he’s had some luck. The recent launch of Halo 3 for Microsoft’s Xbox 360 gaming console gave the device a sales boost, and with several more “awesome” titles on their way, he is hoping that Microsoft can win the console wars over the holiday season in the developed world. 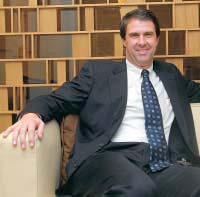 But Bach is really looking forward to the revamped Zune, Microsoft’s personal digital music player, and he firmly believes that by the end of the year, the Zune will be breathing down the neck of the iconic Apple iPod. “We would really like to expand our position from number two, and I believe that we can.” But how? “The digital music space is in its beginnings, and we feel that we can make the digital music experience better. While Apple is all about being insular, we want to make the music experience social again.”

And to do that, the new Zune players, which currently are not available outside of the US, will have several new features. Including one called the ‘ZuneCard’, (much like the ‘GamerCard’ on the Xbox Live service) that will allow individuals to upload their track lists online and share it with their friends, and an expansion of the music ‘sharing’ service, which allows Zune users to zap songs to each other (with limited playability).

On the issue of digital rights management (DRM), loathed by music consumers and pushed by the music industry, Bach has some interesting opinions. “Philosophically, at Microsoft, we understand the need for people to protect their Intellectual Property (IP) but the truth is that DRM is intrusive, and it is difficult to make DRM a great consumer experience.”

But what about the recent experiment by British alternative rock band Radiohead, which is allowing its fans to download songs from its new album ‘In Rainbows’ for free? “It is an admission that Radiohead makes most of its money through touring, and it is great for fans. At the end of the day, we are willing to implement any system the publisher wants…but the labels and publishers should do a better job.” In fact, Microsoft will sell over one million unprotected (no DRM) songs in their new Zune marketplace. That may not be enough to get Apple (it sold its 100 millionth iPod in April this year, making it the fastest selling music player in history) to lose sleep, but just the same the bosses at 1 Infinite Loop, Cupertino, had better watch out.