With TRAI’s proposals suggesting that the DoT permit MVNO services in India, the picture is getting slightly clearer. Grey areas, though, still remain.

In a recent policy paper, telecom regulator Telecom Regulatory Authority of India (TRAI) sent a proposal to the Department of Telecom (DoT) with guidelines for permitting the operation of Mobile Virtual Network Operators (MVNO) in India. This issue has been debated intensely ever since Virgin Mobile launched under the Tata Indicom banner in January this year. While the Tatas claim that the Virgin Mobile service is a “sub-brand” under its banner, its rivals have shouted foul and have argued that Virgin Mobile is a MVNO. 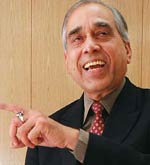 TRAI’s Mishra: Some loose ends
With TRAI’s proposals suggesting that the DoT permit MVNO services in India, the picture is getting slightly clearer. Grey areas, though, still remain. As an executive from a large mobile network operator in India tells BT: “Why should we allow such a service?” And this is the nub of the matter. An MVNO will depend on existing Mobile Network Operators (MNO) to provide them bandwidth. TRAI regulations allow MVNO players to exist both at the level of simple operations (where they outsource everything to the MNO) and more complex operations (where MVNO players can operate their own back-end systems). The MNO, though, will still own the radio signal to the cellular phone. Clearly, before large-scale MVNO operations become a reality, the first major problem is that of bandwidth. In lucrative mobile markets such as Delhi and Mumbai, mobile bandwidth is already extremely limited.

MVNO players, then, might have to target upcountry markets for business. The TRAI guidelines try to address this issue by giving MVNO players tremendous flexibility and allow them to tie up with different MNO players in different circles. Thus, an MVNO could associate with Airtel in Delhi and Vodafone in Mumbai (though not two players in the same telecom circle).

The second problem is simply one of MNO players not needing MVNO business. “Airtel reaches 40,000 outlets in the country, it has tremendous marketing muscle; unless an MVNO brings a great deal to the table, why would operators like Airtel or Reliance listen to them?” asks one industry observer.

With the state-owned operators, Bharat Sanchar Nigam (BSNL) and Mahanagar Telecom Nigam (MTNL), expanding their networks, it will leave them with spare capacity on both 2G and 3G spectrums. Some expect the first MVNOs to operate on those networks. Of course, that depends on how DoT takes to TRAI’s suggestion.