Last month, Mark Tucker made his second visit to India in six months. The Group Chief Executive of the UK-based Prudential Plc has a very good reason for making those trips. His asset management joint venture in India, with ICICI Bank, is among the top five profitable operations in Asia. “Our single-year profit is now more than the original capital we invested,” says Tucker. 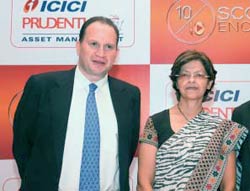 Profitable partnership: Prudential’s Tucker (L) & ICICI’s Morparia
The £267-billion insurance and financial services group started its Asian journey way back in 1923 when it opened its first overseas life insurance branch in the state of Assam in India. It re-entered Indian markets in 1998 through a 55:45 joint venture with ICICI Bank for the asset management business. In 2000, it entered into a life insurance joint venture with the bank.

By 2005, the UK major had relinquished a majority stake in the asset management company (AMC) to ICICI Bank by selling 6 per cent of its holding. Today the Prudential group is present in 12 Asian countries, including China.

For both the joint venture partners, it has been a profitable ride over the past decade. ICICI Prudential AMC generated an operating profit of Rs 73.5 crore in the financial year ended March 31, 2007, roughly a six-fold growth over the Rs 12.55 crore it earned six years ago. Kalpana Morparia, Chief Strategy & Communications Officer, ICICI Bank, says: “The returns have been phenomenal. We have earned a return of over 100 per cent on net worth.” The initial capital commitment of Rs 9 crore from ICICI Bank and Rs 56 crore from Prudential is now valued at around Rs 6,000 crore, adds Morparia, prescribing a market benchmark valuation of 10 per cent of the assets under management (AUM) of ICICI Prudential AMC as a valuation for the business.

The current market downturn has taken its toll on the mutual fund industry, but that isn’t giving Tucker and Morparia sleepless nights. “Globally, the fund industry has seen many challenging times and this is just another such period,” says Tucker. Morparia, for her part, prefers to look at the longer term big picture. “Over the next 12 years, we see 750 million people coming into the middle income bracket. Now, if you compare India’s AUM as a proportion to its gross domestic product (GDP), we are at 8 per cent of the GDP. In other emerging markets, this proportion varies between 30 and 40 per cent. So even if get to 20 per cent of GDP, the opportunity is huge.”

With assets of Rs 54,237 crore as on June 30, ICICI Prudential AMC is the second largest mutual fund in the country. The AMC is also an advisor to $2 billion worth of offshore funds of Prudential Plc. Last year, the portfolio management services (PMS) of the AMC floated a real estate advisory business. It collects money from high net worth investors and deploys it in real estate development. Recently it got a mandate from employee provident fund organisation (EPFO) for advising the organisation on its investment portfolio.