Tata power co has the wind and the sun in its hair—and is also getting steamed up by ideas of pouring water on hot rocks to get free electricity—as it eyes global ambitions based on clean power. It acquires stake in an Australian geothermal co. 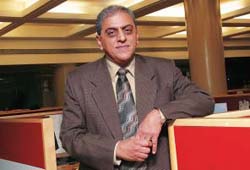 Tata Power’s Menon: Keen to tap sustainable and renewable energy
Tata Power co has the wind and the sun in its hair—and is also getting steamed up by ideas of pouring water on hot rocks to get free electricity—as it eyes global ambitions based on clean power. As Managing Director Prasad Menon told Business Today in an interview, the renewable-energy play spanning wind power, solar energy and geothermal energy will help give it a global footprint.

The company is adding 10,000 MW to its bread-and-butter coalbased power business in India that will quadruple capacity, but is not keen to pursue this source outside the country. So, it has acquired an 11.4 per cent stake in an Australian geothermal energy company, Geodynamics, becoming its largest shareholder. Says Menon: “We are following a conscious strategy to get into sustainable and renewable energy. We have mapped our carbon footprint and are working on ways of mitigating it. We are investing in technology for carbon capture and storage.” The carbon footprint tracks how much of carbon dioxide and other carbon containing gases a company produces in the course of its business.

Coal-based thermal energy is highly carbon producing and Tata Power is not looking at it beyond India and South-East Asia. Menon explains that geothermal energy can be a suitable option for becoming a base load power station or something that runs throughout the day, as opposed to something that can be brought into use during peak hours.

Geothermal energy has two variants—one depends on heat out of volcanic activity and he other on hot underground rocks found in different places across the world. Water is piped underground into the rock bed and piped out as steam—there is no fuel cost. “The investment needed is around Rs 10-14 crore per megawatt. But there are no fuel costs after the investment is done,” says Menon. The company has its eyes on rock formations in states like Chhattisgarh and is keen to bring in technology from Geodynamics to India. 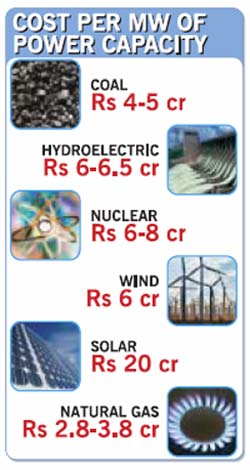 As for wind power, Menon says that although wind is a popular form of renewable energy, it cannot be a base load station as it has a plant load factor of only 20-25 per cent. Tata Power is setting up 100 MW of wind power energy in a vendor-managed wind power park in Maharashtra funded by the Asian Development Bank. “We are also looking out for land to set up our own wind power parks. We will work with vendors for supply of equipment and we can work with any vendor across the world. However, the management of the wind power parks will be in our hands,” says Menon.

The company wants to set up windpower capacity of 500-600 MW. Tata Power has also entered into an agreement with the Government of Bhutan to develop a 114 MW hydroelectric power project on the Dagachhu river. The project will be executed by a special purpose vehicle, Dagachhu Hydro Power Corp Ltd, in which Tata Power will hold a 26 per cent stake.

Menon did not wish to comment on the nuclear power plans of the company but it is well known that the company has made its plans and is waiting for the government to allow private sector participation in the sector.

Menon adds that the company is looking out for a suitable technology in the solar thermal sector where sunlight is concentrated to directly heat water and for other household needs.

On the issue of solar photovoltaic cells where sunlight is converted to electricity, Tata Power’s CFO, S. Ramakrishnan, says the government needs to provide incentives to people to invest in solar photovoltaic cells. “In many European countries it is mandatory to put up solar panels on the roof for heating purpose and there are tax incentives. It needs to be done in India for popularising solar energy,” Ramakrishnan says.