Most of Jammu and Kashmir's PSUs depend on the state government for survival. But the new BJP-PDP regime now wants them to pull their own weight.
Ishfaq Naseem | Print Edition: July 19, 2015 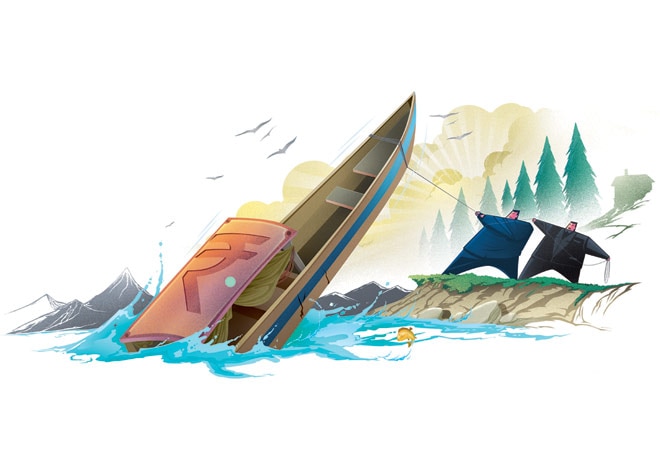 Jammu and Kashmir 's State Motor Garages Department, which until now merely provided vehicles for ministers and officials, will soon become an auto distribution agency as well, selling vehicles to private buyers. It will be the first such department in the country to do so.

The state's loss-making discom , the Power Development Department (PDD), has been turned into an autonomous company. The power generating body, the Jammu and Kashmir State Power Development Corporation (PDC), which has been a separate corporation for two decades, is likely to be listed on the bourses.

Until now, the J&K State Road Transport Corporation (SRTC) ran buses only on far-flung rural routes that private operators shunned. But soon its vehicles will also ply on lucrative routes between towns, competing with private buses.

Click here to Enlarge
Rocked by a violent insurgency for the last quarter century, and irresponsible governance for long stretches as well, Jammu and Kashmir is in a financial mess. The Bharatiya Janata Party-People's Democratic Party (BJP-PDP) coalition government, which took over on March 1 this year, inherited liabilities of Rs 9,000 crore. Most of the state's 26 public sector units (PSUs) have accumulated huge losses. (The only notable exception is J&K Bank, which earned a net profit of Rs 508.60.5 crore in 2014/15.) But as the three instances cited above show, the new government has ambitious plans to bring about a recovery.

Heads of PSUs have been bluntly told they have to improve their financials or their units will be shut down or sold. They are being encouraged to look for private clients rather than depend solely on other PSUs or government departments for business. "The PSUs have been a drain on the state exchequer," says a senior finance department official. "The state government has to either close them down or turn them profitable."

The PDD, for instance, has been failing to meet its revenue target for the past three years. Against a target of Rs 2,011.47 crore in 2012/13, it realised only Rs 1,693.51 crore; the following year, estimating revenue at Rs 3,344.60 crore, it achieved only Rs 1,714.25 crore. In 2014/15, it set an even higher target of Rs 3,508.62 crore, but managed less than in 2013/14, a mere Rs 1,527.67 crore. The generation company PDC has an untapped goldmine at its disposal, since the hydropower potential of J&K, with its numerous mountain streams and rivers, at around 20,000 MW, is enormous. (Successive state governments have railed against the Central government-owned NHPC for providing J&K only 12 per cent of the power it produces from projects in the state free of cost.) The PDC estimates it can develop 9,344 MW of hydropower in the next few years - which would make the state power surplus - but to do so, it needs an investment of around Rs1 lakh crore. A recent report by the state's Directorate of Economics and Statistics (DES) has pointed out that the state's PSUs are doing so badly they have to depend on the government to pay employee salaries. "These units have to compete with the private sector, but the productivity of labour as well as capital is low," it says. Most of them have suffered from long strikes and damage to infrastructure during the militancy years. They are also largely overstaffed, having employed too many people for political considerations. "Fresh infusion of technology requires additional funds, which are not easily available. Under these circumstances, it has become necessary to carry out reforms ? at a fast pace," the report adds. 'The emphasis is on profitability rather than retaining employees. We are trying to increase sales by focusing on better designs and higher quality', says Javed Iqbal, managing director, J&K Industries.
More changes are in the offing. Kashmiri handicrafts have always been popular, both within the state and outside, but government outlets selling these were few and in poor condition. The J&K Handicrafts Corporation is now repairing and renovating its showrooms not only in Jammu and Srinagar, but also in Delhi, Lucknow and Chandigarh. The restaurants and hotels owned by the J&K Tourism Development Corporation are in a similar state. Their running is now being outsourced to private players to cut down on operational expenses.

The J&K State Industrial Development Corporation (SIDCO) has faced losses because many local industrialists it gave loans to have defaulted. "We are working on a strategy to make SIDCO profitable," says Kifayat Rizvi, Managing Director. Proposals being considered include offering loans to businessmen from outside to set up units in the state. But there are hurdles. "If we invite people from outside, we need to provide them land to set up their units," adds Rizvi. "How do we do that? We may have to acquire more land to do business. Increased investment will, in turn, raise tax revenues and also push up exports."

J&K Industries Ltd (JKIL) is another sorry story. It began in 1963 with 15 units manufacturing textiles, woollen fabrics, leather and wooden goods. Today, only four units are functioning, while the PSU has accumulated losses of Rs 447 crore. Production fell from goods worth Rs33.46 crore in 2002/03 to Rs11.09 crore in 2010/11, while sales declined from Rs 17.23 crore in 2001/02 to Rs 2.63 crore in 2010/11. "The losses are due to surplus staff, low productivity, obsolete machinery and non-availability of technical expertise," says a senior Industries Department official. 'We may have to acquire more land to do business. Increased investment will, in turn, raise tax revenues and also push up exports', says Kifayat Rizvi, Managing Director, SIDCO.
But JKIL, too, is trying its best to revive. "We have already brought down our annual loss from Rs 29 crore to Rs 5 crore in the last five years," says Javed Iqbal, MD, JKIL. "We could have reached break-even point last year, but the floods did us massive damage. Our machinery at the Rajbagh silk factory and the Bemina woollen mills - both in Srinagar - was badly affected." Echoing the SRTC official, he maintained that JKIL had been started as a social obligation, to provide jobs in a state sorely lacking employment avenues at the time. "But now the focus has changed drastically," he adds. "The emphasis is on profitability rather than retaining employees. We are trying to increase sales by focusing on better designs and higher quality."

Much of government recruitment from now on is also likely to be on contract. The new recruits will be annually rated and - in sharp contrast to permanent employees - will get increments only if their performance rating warrants it. Clearly, as J&K makes a concerted effort to get back on its financial feet, the success or failure of its public sector units will play a critical role.