A new report suggests ways to fix the ‘flaws’ in the functioning of the IIMs, but the prescription has created controversy and resentment among top IIMs.

“The responsibility for the governance of IIMs is divided between the Government, the Boards of the IIMs and the Directors. None of them have been able to play an effective role in developing strategies and goals for meeting new challenges, and making IIMs into institutions which could rank with the best business schools in the world” —Report of the IIM Review Committee, 2008 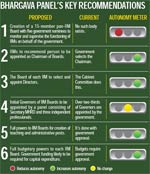 Click here to Enlarge
What is wrong with the Indian Institutes of Management (IIMs)? Plenty, if a new report prepared by a committee headed by R.C. Bhargava, Chairman, Maruti Suzuki India Limited, is to be believed. The report titled “IIMs: From Great Teaching Institutions to Thought Leadership Centres” says that the IIMs’ current system of functioning is flawed and that has kept these business schools from being ranked with the world’s best.

With one new IIM that has just opened in Shillong and six more on the way, including one in Jammu and Kashmir, the need for a report seemed rather obvious. However, given the scrap that the Ministry of Human Resource Development (MHRD) has been having with the IIMs over the past few years, some IIM alumni and members of existing IIM Boards feel that the Bhargava Committee’s report is just a back-door way for the government to increase its control of the fairly autonomous IIMs.

The sore factor is the Bhargava Committee’s most controversial suggestion—creation of a 15-member pan-IIM Board to act as a gobetween the government and the soon-to-be 13 IIMs. This board will not have any role to play in the day-to-day functioning of the IIMs, but it will approve vision and mission statements, analyse the performance of each IIM every two years, as well as advise the government about the IIMs. Of the 15 Board members, five will be government nominees.

R.C. Bhargava
The boards of IIM Ahmedabad and IIM Bangalore have slammed the report. Ironically, the two lead members on the panel, Bhargava and Rediff Chairman Ajit Balakrishnan, sit on IIM Calcutta’s board. IIM Bangalore has formally stated that the report will stand in the way of creating strong institutions.

Essentially, the Bangalore and Ahmedabad IIMs are opposed to the idea of a pan-IIM board. A member of the IIM Ahmedabad Board claims that while the report suggests that the older IIMs (Ahmedabad, Bangalore and Calcutta) have been successful in creating independent and discernable images, the creation of a pan-IIM board will eventually create a standardised product, which will destroy the ethos of the system. “Would a pan-IIM board really have the best interests of a particular IIM in mind?” the member asks.

The report has found gaps between the role and functioning of the boards of the IIMs and that of the Director. It blames the Director for the lack of faculty appointments as well as the failure to recruit suitable candidates for the Fellow Programme in Management (FPM), the doctoral course in management from which most IIMs recruit faculty. The report highlights the fact that most directors have been “weak” because of their ambiguous relationship with the board and the government. Currently, IIM directors are appointed by the MHRD but report to the board.

The report says that with restricted powers, the boards and directors are often helpless and as such the creation of a pan-IIM board will help in the decision-making process by speeding it up. Bhargava contends that the IIMs will have a say in the appointment of members to the pan-IIM board.

But the report is timely for another reason. Since 1990 the demand for management education has shot through the roof in India. The number of examinees sitting for the Common Admission Test (CAT) entrance has risen from 25,000 in 1990 to 2,50,000 in 2008 while the number of seats has just about risen from 500 to 1,800 through the addition of new capacity and two new IIMs—at Indore and Kozhikode. However, the number of independent B-schools has shot up from around 100 in 1990 to over a thousand today, with several of them not being under the aegis of the All India Council on Technical Education (AICTE). It was to counter the increase in back-alley unrecognised MBA institutes that the government decided to establish the new IIMs. The report suggests that the new pan-IIM board will help in the establishment of the six new IIMs.

Some feel that the existing IIMs are being “jealous” and do not want to help the new schools, but board members deny the charge. “We are all for mentoring, and if you look at the Directors of other IIMs, they are fellows from IIM-A,” says an IIM Ahmedabad board member, adding: “What we are against is the concept of standardisation and the resultant bad governance practices that the creation of a super-board will have.”

But, as Bhargava notes, the IIMs are government institutions and cannot demand “independence” from the government. “I do not believe that the institutes that are protesting have truly understood the import of the report,” he says. Whether the Committee’s findings are taken seriously by the government is yet to be seen. Not all the recommendations of the six previous IIM Committees, including the three review committees, were adopted. But given the noise the latest report has generated already, the furore does not look like ending anytime soon.

What IIM review panel should have said