A year ago T.G. ‘Tiger’ Ramesh, an IT industry veteran-turned ecotourism newbie, found himself face-to-face with Azim Premji, Wipro’s Chairman and among the richest people in the country. Rather than any shop-talk, he found himself talking to his next and most lowprofile investor. Azim Premji
Away from the arc lights at Wipro, 63-year-old Premji, an eco tourism votary, had just chanced upon an ideal investment, both from a business and personal interest viewpoint. “Despite his keen interest in the project, his team was in no hurry to finalise a deal,” says Ramesh, the Founder of Cicada Resorts, “it went through our books with a fine-toothed comb and visited our resorts several times before taking a decision.” The team Ramesh refers to is Azim Premji Investments (API), the private investment vehicle for the Wipro Chairman. Its corpus for this agency includes the Rs 700 crore he earned as dividend from the ownership of nearly 80 per cent of Wipro’s shares. From relying on third-party fund managers to manage his growing investment interests outside of Wipro, Premji has hired specialist investment managers as his portfolio has expanded. Today, API is managed by Prakash Parthasarathy, a computer engineer from BITS Pilani and a gold medal winning MBA from IIM Bangalore. 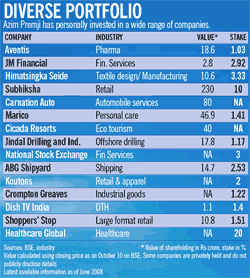 Click here to Enlarge
Jagdish Khattar, Maruti’s former MD, laughs when you ask him why Azim Premji’s personal investment arm invested in his new venture Carnation (see Khattar’s Second Innings). “I was reading the papers in the morning and I saw a story that Premji had invested in a cancer hospital (HCG Global). While I had a lot of offers, I wanted Indian money and I thought ‘why not?’ and e-mailed Premji’s office. The next day, they got back to me.” Like the due diligence with Cicada, API invested the same time and effort with Khattar’s new venture. “I have to admit that they were very thorough. They spent 10 days in my office going through every line and detail of our business plan. After that, they spent time going to showrooms and workshops of all the major players, meeting mechanics and executives, essentially validating my business plan,” he says. Rather than have a single-track investment approach, API invests both like a mutual fund in publicly-held companies and as a private equity firm, buying sizeable stakes in companies. “We’re looking for a strong business model and top management,” Parthasarathy says. Typically, he’s as reticent as his taciturn boss, refusing to disclose investment details and providing only the briefest details to us. T.G. Ramesh
However, according to data collected from the BSE, industry and media, Premji likes to look at a wide array of industries—his latest PE-like investments in Jagdish Khattar’s Carnation Auto, Subhiksha Retail and specialist oncology treatment chain HCG Global are ample testament to this fact. “This $20-million funding will help us expand our geographical presence and API will add invaluable operational expertise,” Dr Ajai Kumar Singh, Chairman and CEO, HCG Global said after announcing the deal in May this year. The deal also provided some insights into the investment rationale of API. “Healthcare in India is going through a rapid transition,” Parthasarathy said back then, “there will be massive demand for specialised services from HCG.” API’s investment in Subhiksha also demonstrates how it typically targets companies with a good business model in highgrowth industries. According to unconfirmed reports, Premji has acquired a 10 per sent stake in Subhiksha for about Rs 230 crore. With organised retail accounting for under 5 per cent of the overall market, Subhiksha had announced plans to tap this massive potential. It will invest Rs 1,200 crore over the next two years and has already acquired Blue Green Construction and Equipments. API acquired this stake from ICICI Venture in September this year. “Premji and Subhiksha have the same focus on values. He is among India’s sharpest business minds,” says the retail company’s Managing Director R. Subramanian. 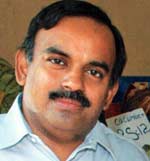 R. Subramanian
The interest in these new growth industries has also meant that API has shuffled its pack along the way. Typically, Parthasarathy is unwilling to shed much light on these deals, but does admit that they’ve quit a few investments in the last couple of years. Among those exited include Today’s Writing Instruments and two investments in pharma, according to industry sources. Instead, API has gone long on growth markets of healthcare, financial services and retail. “We are a sectoragnostic fund, we want to focus on the business plan and execution,” says Parthasarathy. With Azim Premji as the single source of funds, liquidity clearly won’t be an issue for API.

However, with the global economy and the markets in a downturn, how will API fare? Not very badly, according to Parthasarathy. “We don’t need to worry about funding, so we can focus on our deals. This is a great time to get cheap deals,” he says. Don’t be surprised, then, if Premji quietly seizes the opportunity to pick up stakes in undervalued companies.