Africa is turning out to be a services market for India.

It seems like Africa, Africa everywhere. An India-Africa Summit is on the anvil in the next few days (April 8), even as there was a threeday CII-EXIM Bank Conclave on India-Africa Project Partnership 2008 last fortnight, where 131 deals worth $10 billion (Rs 40,000 crore) were on the table. The top discussion points were: technology, agriculture, human resources and energy. One would have imagined that energy security would top the discussions.

After all, Africa is a key resource for satisfying India’s growing energy needs. Nigeria alone accounted for over 12 per cent of India’s global crude oil imports in 2006-07, second only to Saudi Arabia.

Yet, these discussions on comprehensive trade were perhaps a need of the times. The Chinese, the other big guzzlers of energy, minerals and materials, can put billions of dollars of investments on the table when it goes out to woo the Africans seriously. The communist country is also known to offer massive lines of credit to swing deals to its side. And India, too, seems to be getting into the act. Last fortnight’s conclave drew 600 delegates, 30 ministers and 15 banks from Africa. Evidently, Africa no longer wants investors who just exploit its resources.

Taking note recently, Minister of State for External Affairs Jairam Ramesh said before leaving for, where else but, Africa, “India must take care to see that it is not perceived as being interested only in Africa’s raw materials and resources.”

Partnerships, not procurement should be our strategy, reiterated Ramesh. And India certainly has much to offer. Indian businesses such as the Tata Group or the Kirloskars have been in Africa for close to three decades, if not more. While the Tata Group’s interest in Africa spans automobiles to steel and software, Kirloskar Brothers’ water pumps have aided water management in several African countries. “Africa is the last frontier of opportunities. The growing African economies and their ‘Look East’ policy have focussed their attention towards India as a provider of Triple A technologies— adaptable, appropriate, affordable,” says Syamal Gupta, Chairman, Tata International, who is also Chairman of CII Africa Committee.

Tata Africa alone, a subsidiary of Tata International, has a strong presence in over 10 African countries with investments exceeding $100 million (Rs 400 crore). Ranbaxy, another early entrant, has over $126 million (Rs 504 crore) in sales and presence in 10 countries in Africa. 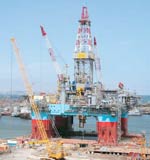 Energy deals
Other companies have also made inroads into Africa. Construction company Shapoorji Pallonji, for instance, is building the Presidential Palace in Ghana. Infrastructure consultancy RITES is managing the Tanzanian railway system along with building roads in Ethiopia, selling locomotives to Senegal. IT firm Satyam Computer Services strengthened its South Africa operations. After the conclave, IL&FS, too, is planning an office in South Africa. As a result, Tata International’s Gupta believes: “the present day trade and investment should double in the next five years.”

Moreover, these investments should be able to stitch larger energy-related deals as well. However, for that a comprehensive, cohesive strategy needs to be adopted spanning firms and sectors, believe experts. Recently, energy-related public sector units sought the help of Ministry of External Affairs in dovetailing such trade and investments into effective deals for energy, minerals and resources. China, for instance, leverages aid and export credits for its energy investments.

“There has to be a concerted effort by Indian companies to tap this entire African opportunity,” says V. K. Agarwal, MD and CEO, RITES.

Nine yards to turn around