Developers are refusing to admit it, but they are in trouble. Smaller developers are also getting affected by the downturn, having been forced to defer their IPOs due to adverse market sentiments.

The story goes that a man lost in the jungles is accosted by a bunch of cannibals, all ready to literally roast him. In desperation, he cries out, “Oh, God! I’m scr**ed.” Out boomed a voice from the skies: “No, you’re not. Pick up that large stone on the ground and hit it on the chief’s head.” The man, who does as he is told, hears the heavenly voice again: “Now, you’re scr**ed!” It’s pretty much the same situation for India’s sundry real estate developers, who thought the worst was behind them a few months back, only to discover that there’s more bad news around the bend. 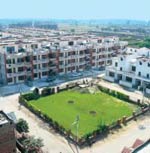 Worse ahead? Developers are in a spot
Admits Pawan Malhotra, Managing Director and CEO, Mahindra Lifespace Developers: “The sentiment is definitely bad due to a combination of factors and there is a fall in sales overall. Luckily, we don’t have too many projects on hand.” Malhotra may be lucky his capital is not tied up in projects (that nobody is buying) but he does say that conversions from enquiry to sales have fallen drastically. “If earlier, the percentage of actual buyers out of total enquiries was 50, it’s now down to 10-20,” he points out. And with the banks raising loan interest rates by another 75 basis points following the recent repo rate hike by the RBI, Malhotra expects the second quarter to be worse, with a possible improvement in the third quarter.

That’s also what Parsvnath’s Chairman Pradeep Jain is banking on—a glib belief that inflation at the end of the year would be 7.5-8 per cent, which should result in the softening of interest rates. Fat chance, say industry observers, who feel that real estate is in for a longish winter lasting at least a year. “The noose is only going to tighten further as money is not just expensive but also scarce, and while the topend guys have access to capital, it’s the mid-level players who will be in a spot of bother,” observes Akshaya Kumar, Managing Director, Park Lane Property Advisors.

That may fly in the face of Jain’s bluster, who while admitting to lesser-than-expected revenues and profits for Q1 2008-09 for Parsvnath, is announcing new projects by the day. Jain’s company, which is seeking an additional $400 million from overseas private equity players for its projects, is also believed to be in a financial crisis internally, having defaulted on payment of salaries to its employees, quite a few of whom are either in the process of quitting or have been asked to leave.

Its competitor, Omaxe, is believed to be faring no better. It has been forced to pay back in cash half of the Rs 300-crore loan it had taken from Indiabulls Financial Services. Reason: its stock, against which it had borrowed the money, has fallen from Rs 500 or so in December 2007 (when it took the loan) to Rs 119 at present.

Omaxe, of course, may be also stretching itself thin by diversifying into non-realty areas—a home furnishing retail store chain, cement, power and steel plants in southern India and aviation. “But these are just announcements— nothing much has been done on these projects, so there’s little question of stretching the company’s finances,” explains Agarwal.

Smaller developers such as Vatika Group are also getting affected by the downturn, having been forced to defer their IPOs due to adverse market sentiments. The company, which went in for a $225-million private equity placement last year as its balance sheets were not consolidated, is believed to be in a financially tight spot with its internal accruals getting diverted towards land acquisition.

“It’s a temporary hiccup but, yes, land acquisition costs need to come down by another 40-45 per cent for us to feel comfortable,” says Gaurav Bhalla, Director-Marketing and Operations, Vatika Group. Of its total land bank of 1,600 acres, it is yet to complete payment towards 600 acres.

Almost all developers are also taking a hard look at their product offerings, trying to maximise returns from a given area. “To increase affordability for the end-user, we have resized our apartments. So if a two-bedroom apartment was offered in 1,000-1,200 square feet range, it will now be built in 800 square feet,” informs Sanjeev Srivastva, MD, Assotech. Typically, developers, while refusing to publicly admit to any crisis, are not shying away from using the situation to their advantage.

“The opportunity to negotiate with your vendors and landlords is greater today than, say, a year ago. The industry, as a whole, is getting consolidated,” says J. C. Sharma, Managing Director, Sobha Developers, which admits to flagging sales in cities like Pune. Sharma’s strategy also sees his company improving its debt-equity ratio through a rights issue that should give it some leeway in the current scenario. So, will he admit the party is finally over for real estate developers? “Well, the music’s still the same,” quips Sharma. Only, while last year they were dancing to it, this year, they are facing it.

A good deal for everyone