Stepping back to win

TVS Motor launches new products that may revive its fortune.

Towards end-February, Venu Srinivasan was in a real dilemma. As Chairman and Managing Director of TVS Motor Company, India’s third-largest twowheeler manufacturer, he was caught between his stakeholders’ interest on the one hand and his strong conviction on the other. The company’s original 125cc motorcycle ‘Flame’ ended up in the courts after Bajaj Auto accused it of violating its patent over the use of twin spark plug technology and obtained an injunction restraining TVS Motor from selling the product. He was convinced that his company had not breached any law and will eventually win the case. In fact, TVS Motor has filed a suit questioning the very grant of patent over the use of twin spark plug to Bajaj Auto in the first place on the grounds that the technology was a ‘known art’ and has been in use since 1987. 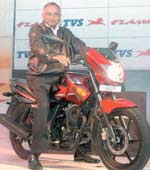 Venu Srinivasan
But the Chennai-based company was losing about Rs 40 crore a month by not selling ‘Flame’. Suppliers and dealers were getting jittery. The top management was frustrated as they were sure that with ‘Flame’ the company has finally got the product right to fix the gaping hole in the fast moving ‘executive segment’—the cause for its poor showing in the last couple of years. Waiting for the law to take its course would naturally take time.

The company had already lost over two months. Should he tweak the product by dropping the contentious twin spark plug technology and go ahead with the launch of ‘Flame’? Will this weaken the company’s case etc were some of the questions he grappled with.

When he re-launched the 125cc ‘Flame’ on March 10, it became clear that he had taken the side of his stakeholders. The new model, the company claimed, had for the first time in India a ‘revolutionary threevalve engine’ that delivers the best performance without compromising on fuel economy. The engine, developed and patented by AVL Austria and licensed to TVS Motor, had a single spark plug ignition system.

The company plans to sell 25,000 to 30,000 units of ‘Flame’ a month in 2008-09 and regain its lost market share in the ‘executive segment’. By being practically absent for two years in a segment that, at 2,50,000 units a year, constitutes half of the total two-wheeler market in the country, the company’s revenues and profits had taken a hit.

The litigation, Srinivasan says, will continue. He is confident that TVS Motor will ultimately emerge victorious. The company, officials say, has taken the business part out of the equation in the patent battle. Also, twin spark plug was only an incidental feature and more important was the three-valve engine technology, they say.

Meanwhile, TVS Motor opened another front in its battle with Bajaj Auto by foraying into the threewheeler segment—a market monopolised by the latter. On March 9, it launched TVS King, India’s first 200-cc two-stroke autorickshaw. It hopes to sell around 30,000 units in 2008-09 and grab 30 per cent of the market in the next 18 to 24 months. TVS Motor plans to leverage its nationwide distribution and service network to market its three-wheeler across the country. It also plans to export TVS King to over 50 countries where it is already present.

The three-wheeler market has for years been the stranglehold of Bajaj Auto and with TVS Motor’s entry it should see some competition. TVS Motor fired the first salvo by announcing welfare schemes for TVS King buyers and their families.

A leg-up for broadband