The third quarter results confirmed the worst fears that the slowdown has hit companies hard. And the next quarter is likely to be worse. The global liquidity crisis had its most severe impact on the Indian economy in the quarter ending December 2008. The aggregate results of 780 companies, excluding banks, tracked on CMIE’s Prowess have shown significant contraction in revenue growth and a big dip in operating and net profits. The slump has registered more or less across all sectors, with some sectors faring much more poorly than others. Does that mean that Indian industry is now over the hump? Well, some sectors are slated to post better numbers in Q4 2008. However, industry experts seem to differ in their prognosis for the future, painting an uncertain picture of how and when the Indian economy will climb out of the doldrums.

The biggest reason for the big drop in revenue growth for India Inc.—from 35.08 per cent to 10.47 per cent—in the third quarter ending December 2008 was because of a slump in sales in the manufacturing sector. This was primarily because of a steep fall in commodity prices,dramatically altering the profitability of companies like aluminium manufacturer Hindalco and Tata Steel.

Many automakers were forced to shut their factories for days towards the end of 2008 due to rapidly accumulating inventory, leading to a big fall in revenue growth. The worst hit were commercial vehicle makers including Tata Motors and Ashok Leyland. Tata Motors’ commercial vehicle sales have declined by over 40 per cent while their car sales have contracted by nearly 20 per cent.

The danger with the current slowdown is the way in which one sector’s woes can significantly affect others. For instance, demand for steel, was adversely affected by a slowdown in real estate and the auto sector. Consequently, steel companies like SAIL, Essar Steel, Rashtriya Ispat Nigam were forced to announce price cuts in the range of Rs 4,000 to Rs 5,000 per tonne in November, according to CMIE.

Not surprisingly, net profits for the universe of companies also took a big hit in Q3 2008, falling an additional 31.75 per cent versus a negative growth of 11.2 per cent in the previous quarter. Once again, it was the manufacturing sector that felt most of the pain, primarily because it had to absorb rapid price rises of raw materials, power and fuel. Cement companies, for example, experienced a 30.9 per cent negative growth in net profits while the metals sector similarly fell 43.93 per cent. Huge losses by refineries have exacerbated the slump: profits for the oil & gas sector as a whole took a 57.06 per cent nosedive.

Perhaps the biggest human toll of the slowdown so far is within the textile sector, which experienced a 38 per cent drop in operating profits. A weakening rupee, rising cotton prices and a precipitous slump in foreign demand forced the sector to lay off over 700,000 workers in just under six months. 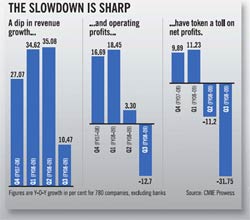 Click here to Enlarge
So, was there any good news amidst this deluge of bleak numbers? The aviation sector made a strong comeback, riding the wave of peak season traffic. This has been a welcome development for the travel & tourism sector, considering the large drop in hotel sales following the Mumbai terror attacks. Aviation—which had reported losses for last 10 quarters—is now in much better financial health, helped by new international routes and substantially lower jet fuel prices. Continued efforts to attract new customers, especially in rural India, has meant that the telecom sector has, in addition to aviation, boosted aggregate sales growth for non-financial services.

Other positives: the power and FMCG sectors did well. Net profits of power generators increased by a solid 18.8 per cent, while that of the consumer non-durable companies increased by 7.24 per cent

So, what lies ahead for Indian industry? It’s a mixed bag. Some feel that while the numbers are grim, most companies are simply tracking macroeconomic conditions and so their performances are not completely unexpected. Others feel that this is just the beginning of more bad news in 2009 as the full effect of the recession in the West hasn’t been felt over here as yet. This is compounded by the fact that credit markets have become clogged and show no signs of easing up lending to consumers. Plus, banks are still not willing to extend much needed liquidity to credit-starved companies.

But on the whole, India Inc. is also tightening up as the economy contracts, but its payoffs will only be seen after 2-3 quarters when consumer demand is expected to revive. That will put more pressure on the markets in the near term. Still, the environment isn’t all that bad. Many companies have built strong balance sheets in the last four years of the boom raising capital and consolidating their market position. That should provide some room for manoeuvre in the coming quarters.
TweetYoutube

Cashing in on insecurity

Banking on the White 'Tiger'