Will Emami’s acquisition of Zandu Pharma change the landscape of the consumer products sector?

Lipsticks can wait, asserts Harsha Vardhan Agarwal, Director, Emami, and son of its Co-Founder R.S. Agarwal. Agarwal Jr, mastermind of the Rs 700-crore acquisition of the venerable Zandu Pharmaceutical Works, is choosing to focus on existing products. Never mind the recession threatening to engulf the world, and Estee Lauder Chairman Leonard Lauder’s theory that women buy lipsticks during a downturn as they save elsewhere. Harsha Vardhan
“Certainly, it is an option... but, for the moment, there are other products with greater potential,” he says. Not only is Emami doing well, but it is entering into what is projected as a long recession with the arsenal of Mumbai-based Zandu, which had done quite well in the first half, growing its sales by 12-15 per cent.

Emami had been eyeing Zandu for five or six years, ever since the Vaidyas, one of the two promoter groups, began thinking of selling out. Nothing happened then, but talks resumed earlier this year and, after a battle with the other promoters, the Parikhs, Emami finally got control of a 70 per cent stake.

“In FMCG, many of them are necessity products… usually people continue buying,” says Agarwal Jr. “At worst, they reduce the usage, or downgrade from one brand of toilet soap or detergent to another… we have not seen any effect of the recession so far.” 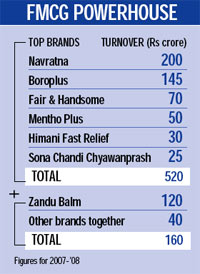 Zandu’s results will show up in Emami’s consolidated results from the third quarter, adding Rs 30-50 crore to the top line and at least around Rs 7-8 crore to the EBITDA this quarter.

The more the merrier
But will Zandu, with its competing chyawanprash, pain-relief balms and cosmetics, be a good fit? Agarwal Jr. asserts that all brands can coexist, but there will be a review of Zandu’s portfolio with the aim of squeezing better performance out of them.

“Certainly, we are going to review their whole product portfolio… one thing we have felt is that the Zandu brand name has a lot of equity but it has not been utilised properly,” says Agarwal. And competing brands will not be killed. “The brand names of Zandu and Emami can coexist— they stand for different things. Emami stands more for beauty, skincare, cosmetics, while Zandu is more of a health care platform, about Ayurveda,” says Agarwal. Harish Bijoor
Harish Bijoor, Brand-Strategy Specialist & CEO of Harish Bijoor Consults Inc., echoes Agarwal to point out that Emami is largely a beauty/cosmetic player while Zandu has a stronger health platform, and adds: “Increasingly, health will be a very important area of growth for most FMCG companies.”

Nor does Bijoor see any brand overlap problem. “… rationalisation can always happen at a later stage. Having dual brands sometimes is a good strategy,” he says. “Having different brands has actually afforded the company new distribution channels, which is really the heart of this business.”

Small beginnings, many firsts
Can Emami pull it off? Going by its history, yes. Emami was set up in 1974 as a partnership by two friends, R.S. Agarwal and R.S. Goenka, who gave up cushy jobs to do their thing with a capital of Rs 20,000. Today, Emami has a basket of powerful brands, many of them national leaders.

In 1978, it acquired Himani, a very old company with good brands. As Emami grew, it pioneered concepts such as buy-one-get-one free (BOGO) in India, in-film advertising and even a fairness cream for men, Fair & Handsome, which took the market by storm. One of its biggest successes was Sona Chandi Chyawanprash, launched in 1999.

Through Himani, it launched its first blockbuster, Boroplus Antiseptic Cream, in 1984, edging out monopoly player Boroline of GD Pharmaceuticals. In the ’90s, came the Navratna cool oil.

So far, Emami, with a profit after tax of Rs 93 crore on sales of Rs 586 crore for 2007-08, has taken a conscious strategy of not taking on the multinationals on their turf. But Emami operates in a market that has some old and well-known companies like Dabur, Baidyanath and Charak, when it comes to traditional products like chyawanprash or hair oils and creams.

But apart from the wide range of its products, now complemented by Zandu’s, Emami’s skills lie not only in coming up with blockbusters, but its star power. It has signed on the who’s who of Bollywood to promote its products, and spends over Rs 100-125 crore a year on the stars, agencies and media buying. Emami has not worked out a definite marketing or branding strategy for Zandu, but it could very well raid Bollywood again for brand ambassadors.

Ready for more
What next? Emami funded the Zandu deal from internal accruals, including those of its group companies, reserves and loans—and claims to have enough cash left over for another acquisition. “Of course, we can certainly manage another acquisition…,” says Agarwal Jr. But Emami will stick to its core instead of diverting its energy into allopathic over-the-counter products.

Zandu has brought with it an unexpected addition to the family—a subsidiary that makes bulk drugs. Given Emami’s decision to stick to Ayurveda, what will it do with this unit? Agarwal Jr. is guarded: “We will look into it… at the moment, we are exploring all possibilities.” The Rs 1,500-crore group is already quite diversified— it is present in cement, paper, ballpen tips, biotech, hospitals, a pharmacy chain, and realty.

As Harsha’s brother Aditya had put it in the October 16 release sealing the Zandu deal: “The marriage of Zandu and Emami will change the landscape of the consumer products sector in India.” Bijoor sounds more practical. “I see this as a very strategic fit for Emami, as Zandu has very big equity on its health plank and additionally it offers them inroads into India’s hinterland,” he says.

According to him, Emami will have to start focussing on the Tier-II, Tier-III and rural towns with populations of 2,000 homes and even less. Bijoor reckons the big players will get to dominate the cities and those like Emami will willy-nilly have to look at other markets for growth.

“Emami, whether it likes it or not, is a fringe player in this business; given its image and the nature of its operations it will be relevant for the people who live in smaller cities,” asserts Bijoor.