It began with a small sit-in demonstration and chakka jam convened by the All India Minorities’ Forum and an organisation called Furfura Sharief Muzhaddia Anath Foundation to protest the continued presence of Bangladeshi author Taslima Nasreen in India (and Kolkata).

It began with a small sit-in demonstration and chakka jam convened by the All India Minorities’ Forum and an organisation called Furfura Sharief Muzhaddia Anath Foundation to protest the continued presence of Bangladeshi author Taslima Nasreen in India (and Kolkata). But within hours, things went horribly wrong; the Nandigram issue somehow got entwined with the “agitation”, spread across the city, turned violent and resulted in rioting and arson. 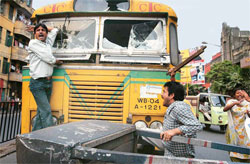 By the end of the day, the Army had to be called in to restore peace and Chief Minister Buddhadeb Bhattacharjee—who got trapped inside his party office in central Kolkata and could not venture out because of the mob violence—found his reputation and future in tatters. “This may be a spontaneous outcry of people over Nandigram and the mysterious death of (graphics designer) Rizwanur Rehman (where foul play by the police is suspected),” says Idris Ali, President of the All India Minorities’ Forum.

The question being asked by everyone is: how could this happen in a state where the CPI(M)’s writ is absolute (the joke in Kolkata is that even trees need the party’s permission to shed leaves in winter)? Says Subrata Mukherjee, senior Congress leader and former Mayor of Kolkata: “The Chief Minister should have realised that violence begets violence.” He was referring to Bhattacharjee’s justification of the recent violence unleashed by his party cadres Nandigram. That statement has badly dented the Chief Minister’s image of an urbane and capable administrator who is fighting his own party to take the state forward. Says famed novelist Samaresh Majumdar: “If the Chief Minister goes on record and says what the police could not do in 11 months, our boys have done in one day, what is the point in keeping such a large police force? Are we living in an anarchy?”

But more than the politics, what is worrying the authorities is the damage the recurring violence, first in Singur and Nandigram and now in Kolkata, has done to the state’s image as a well-governed oasis of peace. Will investors still want to invest in the state? “What is happening in the state is to no one’s gain and benefit. Everything is not lost as yet. The inherent strength and opportunities that draw investments, are still there. The need of the hour is a collective commitment to take the state forward,” says P.K. Ruia, Chairman, Dunlop India.

A related question is: is the CPI(M)’s iron grip over the state loosening? There is no clear answer to that yet. On the face of it, the party does seem to have alienated two groups—intellectuals and Muslims—that gave it a share of voice out of proportion to its strength on the ground and numbers, respectively. However, it is still too early to predict whether this will result in a political mobilisation against it.

But what is apparent is that party hardliners, who make no secret of their discomfiture with Bhattacharjee’s “New Left”, proreforms rhetoric, will use the recent developments to rein him in and reinforce their flagging writ over the powerful West Bengal unit of the party. In that sense, this may well mark the beginning of the decline of the larger than life Chief Minister.

Croma steps on the gas