Forecast of a near-normal monsoon has raised hopes that India’s agricultural growth might stay on track and prevent the GDP from slipping under six per cent.

Rain gods have always influenced the destiny of the Indian economy—of late more in sentiment than in substance. As the share of agriculture in the GDP shrank, so did the direct impact of monsoon on the economy. But 2009 is going to be different. With large sections of industry in severe downturn and services reeling under the impact of dampening urban demand, agriculture is yet again the lone shining light on the economic horizon. And the spread, timing and amount of rainfall during the south-west monsoon from June to September have critically determined the fate of agriculture production and rural income and demand. 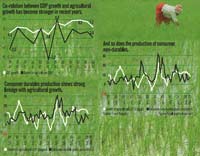 Click here to Enlarge
The government and economists are banking on agricultural growth to rescue the slowing economy. Says Sachchidanand Shukla, Economist, Enam: “To achieve the RBI’s GDP growth estimates of 6 per cent in 2009-10, it’s imperative that agriculture grows at least 3 per cent this year. For that, it’s critical that the monsoon is good this year.”

Indeed, a good monsoon is critical for kharif crops—sugarcane, rice, corn, soybean and cotton that are sown during June-September. India has turned into a major importer of sugar this year, which has increased prices globally. Increased sugarcane output can help reduce sugar imports. Besides, a good monsoon also helps in increasing the output of winter-sown (rabi) crops like wheat by raising the soil moisture.

Since the monsoon-dependent crops account for nearly half of India’s agricultural production, their output impacts the income of about two-thirds of the country’s population that lives off agriculture, directly or indirectly. This, in turn, has a bearing on the over-all demand in the economy. Says Ajit Ranade, Chief Economist, A.V. Birla group: “In a good year, the importance of monsoon gets diminished. But at a time when the other engines of the economy are feeling the heat of the global meltdown, it’s important for the farm sector to deliver.”

For major segments of the Indian industry dependent on rural demand, the monsoon is an important factor in planning production. A fall in rural income, following a bad monsoon, can substantially alter their fortunes. This can affect sentiment in equity markets, particularly of companies that sell products in rural areas, including consumer goods, automobiles and farm inputs such as fertilisers, hybrid seeds and pesticides. Says Shukla: “Both the consumer durables and non-durables industries will be banking on the rural market this year. Therefore, the impact of the monsoon could be pronounced on the stock market.”

The government, too, is banking on a good monsoon this time as it would not want its doddering finances to weaken any further. For, falling income from bad crops could strain available government resources on account of relief measures. Besides, poor monsoon would also push up the food subsidy bill.

The food subsidy bill soared to Rs 50,000 crore last year from Rs 19,000 crore earlier. Says Pradeep Kashyap, CEO, Marketing and Research Team, a rural consulting organisation: “There is already a large subsidy element and a poor monsoon will only make the situation worse.”

The monsoon will also have a bearing on inflation in the food basket. Inflation, based on consumer price indices, is still in double digits due to firm food prices and the higher weightage of food articles in the measurement of consumer price inflation. Says Shukla: “This is an outcome of rural incomes going up due to government initiatives like National Rural Employment Guarantee Scheme and the farm loan waiver. Also, it’s a result of the government steadily raising the minimum support price (for food grains).” Economists feel the coming monsoon would be an important factor in controlling inflation in both food and non-food primary articles.

With so much dependent on the rain gods, the forecast by the Indian Meteorological Department of a near-normal monsoon this year has raised hopes of a bumper crop and spread cheer all around. But the prediction of a 96 per cent rainfall for 2009 makes it the worst in the last five years, when the monsoon exceeded 98 per cent.

Again, a forecast of a good monsoon alone doesn’t guarantee a bumper crop, for it doesn’t tell anything about the spread, timing and amount of rainfall. Besides, good rainfall often also brings floods. Also, in the past, record food grain outputs have been achieved when the forecasts have predicted poor rainfall. Thus, when and where it rains will be much more important than how much.