Byrraju Ramalinga Raju isn’t known to lay it on thick and succumb to hype. So, when the Chairman of Satyam Computer Services says 2007-08 has been an “exceptional year”, he couldn’t have put it better. In the recently-concluded year, Satyam has outperformed the big boys of Indian software by posting a 46 per cent growth in the top line and a 40 per cent growth in net profit (over 2006-07). 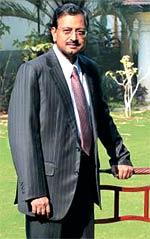 Well, it isn’t as if Satyam is in the $4-5 billion (Rs 16,000-20,000 crore) league, like Infosys and TCS. But then, says Raju, it today has the size and breadth of offerings to be able to deliver end-to-end solutions, win more and larger engagements and transform its clients’ businesses.

However, even in terms of size, the year was a landmark for the company. “We have now crossed the $2-billion (Rs 8,000-crore) mark in revenues and have 50,000 associates (or Satyamites, including in the joint ventures and subsidiaries). This is despite the fact that the global economic environment appears challenging,” says Hari T.,Head (Global Marketing & Communication), Satyam.

So, what did Satyam do differently this year? According to Hari, the company has been diversifying its revenue streams geographically, and expanding its global footprint, with Europe and the rest of the world together contributing nearly 40 per cent of revenues (from about 35.5 per cent a year ago). In terms of its global delivery model, it sees the mix of near-shore and offshore giving it the capability to comb talent pools and address varied markets.

Another significant initiative by Satyam has been its people-related investments, including building front-end relationships by hiring select talent and attracting domain experts. Hari points out that the Satyam framework of “distributed leadership, which continues to significantly spur positive leadership characteristics such as an increased sense of ownership, flattened decision cycle times and dramatically reduced attrition in the last few quarters”. Attrition on a trailing twelve months basis fell to 13.09 per cent from 13.11 per cent in the third quarter. Annualised quarterly attrition for the fourth quarter stood at 11.48 per cent.

It’s doubtless been a good year, but one section of analysts feels that Satyam needs to further diversify its revenue streams if it has to polevault into the $4-5 billion bracket. Currently, 44 per cent of the top line comes from application development and maintenance services and about 45 per cent from consulting and enterprise business solutions. It could, for instance, look at growing its revenues from infrastructure management, testing and consulting.

Interestingly, this growth comes at a time when tired rumours of Satyam selling out persist, but the fact is that Satyam has been making acquisitions—six so far. Raju says inorganic growth has been an integral part of the company’s strategy.

Some Satyam-watchers, like Biju George, Senior Analyst, Edelweiss Securities, feel the strategy behind the acquisitions is sound as they’re being made to gain more high-end capability. However, it is still early to judge the impact of the acquisitions and one may have to wait for another 6-8 quarters to see the results. Says Hari: “We have chosen to make acquisitions that are in line with our long-term goals and consistent with the thought process of adding greater value to our end-customers. Our efforts have been to build niche consulting skills and competencies and this is reflected in our acquisitions.”

These include: Knowledge Dynamics, Citisoft, Nitor Global Solutions and Bridge Strategy apart from the two announced this quarter (Caterpillar’s market research and customer analytics operations and S&V Manage-ment Consultants, a Belgium-based supply chain management consulting firm). “The idea behind the acquisitions,” he says, “is not just to add to our top line but also engage with our customers in their core business areas, directly impacting their key business and resulting in eventual downstream revenues for us.”

Is Satyam ready to step into the extraordinary league of IT services? Says Hari: “We benchmark ourselves on a global basis on a variety of parameters. We believe that as long as we continue to do that and help evolve innovative solutions for our customers, we will continue to do well. This thought process is also exemplified in our new tag line—“Business Transformation. Together,” wherein we are committed to help our customers manage the travails of the market conditions.”