Too much of a good thing

There may be too many malls in India. Around 600 malls are in various stages of construction across the country and over 120 of them are already in operation, according to various industry estimates.

Around 600 malls are in various stages of construction across the country and over 120 of them are already in operation, according to various industry estimates.

However, the blossoming Indian mall market may be some way away from discovering the secret sauce for profitable operations, according to Stewart Hutcheon, CEO, Sandalwood, Asia’s first integrated retail development and management service provider. “Our role varies from country to country; in emerging markets such as India, we get involved from conception of malls, while in developed markets such as Singapore and Hong Kong, we add value to existing properties,” he says. 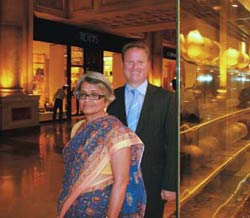 Sandalwood’s Hutcheon (R) & Singh: Want India to take a cue from developed markets
Although there is plenty of scope for growth in India (and indeed the emerging markets), Hutcheon stresses that they can learn plenty from their peers in developed markets. “There is a sense of herd mentality among developers and retailers in India, leading to oversupply and crowding in specific areas, especially in the north,” says Hutcheon.

Part of the reason for the overcrowding in specific areas, he adds, is a lack of planning and foresight among developers. “Retail land is at a premium; you can’t build a mall just about anywhere,” Hutcheon says. In markets such as Singapore and Hong Kong, where land is scarce, some of the best malls are integrated with residential and commercial properties. “Scarcity of land means that some of the best land will be eight, nine or 10 storeys high,” he adds.

In the race to capture market share, malls may be committing some basic errors in construction. Hutcheon says he has worked with developers in India who’ve created too much common area and scrimped on leasable (and therefore revenue and profit generating) space. Retail management (and consequently the services of Sandalwood, a 50-50 JV between real estate consultants Jones Lang LaSalle and Colonial First State Property Management) is important, he argues, because it is economically unfeasible to demolish or widely remodel existing construction to enhance its profitability.

As retailers try to keep pace with the fast-growing market, Hutcheon cautions that features and structure of retail spaces change all the time. “Retail requires constant scrutiny; retailers here today may not be there tomorrow,” says Hutcheon. He says that as retail environments mature, mall owners must be able to re-mix their business, to meet these changing market conditions. Despite some concerns, he believes that both malls and high-streets can co-exist, rather than prey on each other.

In India, for example, Sandalwood is working with 26 malls and expects to sign many more as the market continues to expand. “The problem is over supply in certain pockets; due to a funds crunch in the market, most malls being constructed are over a year late,” says Gagan Singh, Managing Director, India, Sandalwood. From working on incremental improvements to these malls, Sandalwood hopes to introduce them to the concept of retail asset management, which should enhance revenue by at least 25 per cent.

“While over 600 malls are theoretically under construction, how many are will be completed remains unclear,” says Singh. “Mall owners have quickly graduated from a system of selling individual stores to a more profitable business of leasing them.” But with a slowdown looming and many businesses fretting over slow development of retail space, Sandalwood may find its hands full over the next few months.