A former executive at Hyundai Motor India used to say: “Maruti needs three cars to compete with our Santro”. He meant the Alto, Zen and WagonR. But not any more, since Hyundai now has three cars to fight Maruti’s four products in the compact car segment.

If you can’t beat Maruti, copy its strategy.

A former executive at Hyundai Motor India used to say: “Maruti needs three cars to compete with our Santro”. He meant the Alto, Zen and WagonR. But not any more, since Hyundai now has three cars to fight Maruti’s four products in the compact car segment. Though they still do not have a product to go after Maruti’s best-selling Alto, but with three products straddling the range, will the new i10 dramatically alter Hyundai’s fortunes in India?

After a short drive, it has to be admitted that the i10 is impressive. The interior space feels palpably larger than that of the Santro (may be it is the lighter upholstery), the car is better laid out and feels a lot nicer to drive—thanks to a slight tweak Hyundai has given the 1086cc engine to add a little more power, and supposedly a better fuel economy. While the electronics in the engine might be slightly different, the i10 and Getz Prime share the same engine block, even though the Getz also has a 1341cc engine option.

Drivability is good and Hyundai’s service network is fairly bullet-proof. So, the only way you are going to decide which Hyundai small car to buy will be on the basis of looks and money. And the i10 looks very fresh, because the Santro, despite aesthetic upgrades, is still a decade-old design.

Keep in mind, the i10 is replacing the Atoz Prime (the Santro’s export model) in developed markets of Western Europe, though Hyundai will continue to export the Atoz Prime from India to developing countries. The main competition for the i10 is not from a Maruti, but from the Hyundai stable itself. So, essentially it will all be about the money. 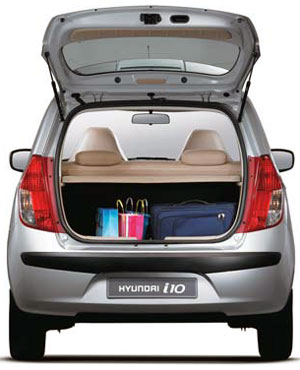 Talking of which, the base model—‘D-lite’ i10 (without power steering) costs Rs 3.39 lakh. The cheapest Santro with air-conditioning, a standard feature on the i10, costs Rs 3.27 lakh and the basemodel Santro without air-conditioning costs Rs 2.7 lakh. The base-model Getz Prime GLE costs Rs 3.95 lakh. Models of the Santro and i10 with power-assisted steering cost Rs 3.4 lakh and Rs 3.74 lakh, respectively.

It is likely then that the i10 will wean away buyers from higher-end levels of the Santro. Buyers of low-end models of the Getz, too, might choose a high-end i10. It seems Hyundai’s basic idea is to copy Maruti’s philosophy—get a person into a showroom and make sure they leave with a car, any car from their stable. And to be honest, when it comes to compact cars, the i10 is tempting. With Hyundai ramping up production next year, getting one may not be an issue either.

(All prices are ex-showroom Delhi and are taken from the Hyundai Motor India website).