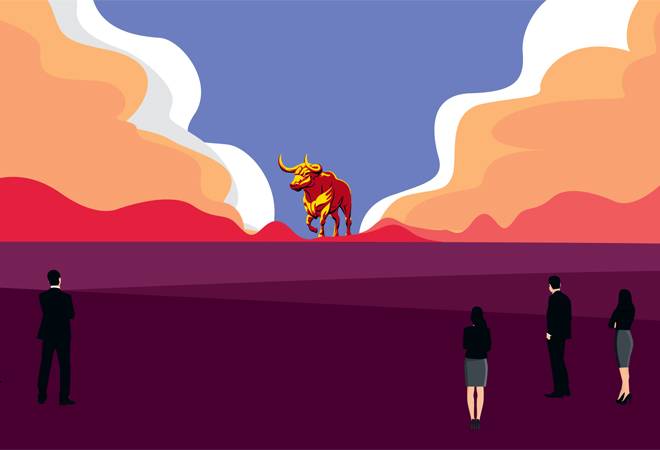 The exodus of companies from China is not new. It's been happening since the start of the trade war between China and the US in 2018. The only difference this time is that India has a fair chance of attracting companies leaving China. This is in sharp contrast to the earlier situation where almost all companies which moved out of China went to CLMV (Cambodia, Laos, Myanmar, and Vietnam) countries as they were cost efficient and better connected to the global supply chain. The Covid-19 pandemic has changed everything.

As companies look at diversifying away from China, they are looking for not just cost savings but also a captive market for their products and services. India, with its big market, is asking companies to set up base here, reportedly developing a land pool almost double the size of Luxembourg.

"Soon after the pandemic broke out, there was flight of capital from India. Later, investors started coming back as they realised that India is the best bet for them," says Prahalathan Iyer, Chief General Manager (Research and Analysis Group) at state-run Export-Import Bank of India. 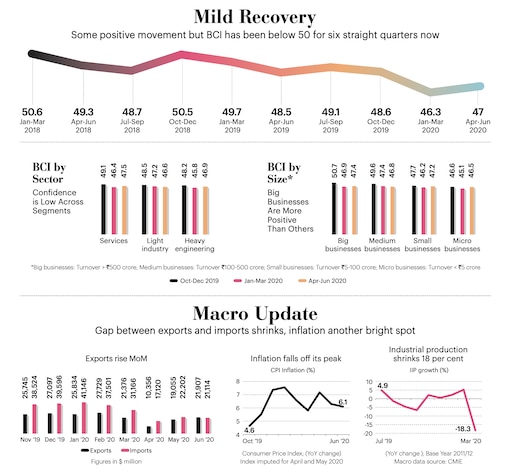 The growing prominence of India in eyes of global investors, coupled with slight recovery in key economic indicators, has improved the sentiment of corporate leaders. The Business Confidence Index (BCI) - on a scale of 100 - jumped to 47 in the April-June quarter compared with 46.3 in the previous quarter and 48.6 in the quarter before that. Market research agency C fore quizzed 500 CEOs and chief financial officers across 12 cities for the survey.

Siddhartha Sanyal, Chief Economist and Head of Research at Bandhan Bank, says the reason for this optimism is a lot more clarity in minds of corporate leaders. "Towards the end of March, when the previous survey was conducted, there was a shock element about the lockdown. Businesses have now understood that they have to strike a balance between what to prioritise and where to compromise. Even though the key economic indicators are still significantly lower compared to the December quarter, they are better than they were in the previous three months," he says.

That is why, after several quarters of pessimism, the latest survey shows that things are looking up for corporate India. A large number of respondents are hopeful that the situation will improve in areas like economic prospects, overall economic situation, overall business situation, financial situation, sales, working capital, availability of finance, hiring, production level, order book, inventory, utilisation of production capacity and profits.

Though a total of 82 per cent respondents believe the government hasn't done enough to revive the economy, 60 per cent expect the overall economic situation to improve in the July-September quarter as compared to just 10 per cent predicting so in the previous survey. Reserve Bank of India (RBI) Governor Shaktikanta Das recently said the economy is showing signs of normalcy with lockdown being eased across the country. Also, 67 per cent respondents hope that their production levels will improve in the September quarter compared to just 9 per cent saying so in the previous survey.

In June, the government had announced a stimulus package worth Rs 20 lakh crore (about 10 per cent of GDP) covering social sector and a host of industries. Out of that, about 60 per cent will come through financial institutions and the RBI. Many worry about the low impact of the package as the actual fiscal impact, that is, the direct stimulus, is just 1-2 per cent of GDP. EXIM Bank of India's Iyer says the government might be keeping a cushion. "They have all options available which might not be implemented at one go. I think what the government has done is adequate to start with. If there's a need, they may exercise other options like extending moratorium on loans and deferment of taxes," he says.

Some economists that Business Today spoke with believe that direct capital injection and giving subsidies to businesses are unproductive. "It might help corporates in the short term but will not make them sustainable in the long run. The production-linked incentive scheme that they have launched for the electronics sector will have a long-term impact," says an economist.

The survey points out that 77 per cent of respondents are planning to sell non-core assets and will go for restructuring in the current financial year. "This is time for consolidation. We expect businesses to focus on their core strengths and de-bottlenecking cash flow issues," says Sanyal. Another 91 per cent are not looking at raising resources for expansion at the moment as most are operating below optimal level of production due to poor demand.

As a supplement to the survey, we do an assessment of other economic indicators. These are trade, index of industrial production (IIP) and consumer price inflation (CPI). The key industrial output indicator, IIP, continued to slide in May. It fell 34.7 per cent compared to the same month last year. This was better than the 57.6 per cent contraction in April. Retail inflation grew 6.09 per cent in June, marginally higher than the RBI's upper margin of 6 per cent.

About the future roadmap, 84 per cent said interventions such as direct cash transfers to individuals, increase in public expenditure, interest rate reduction and capital injection in businesses can boost economic growth for FY21 and beyond. The positive outlook of business leaders in the middle of a global crisis has a surprise element to it. Now, whether they continue to hold on to this optimistic view is as unpredictable as the march of the pandemic.