In all the hype and hoopla over the massive giveaways in Budget 2008—the Rs 60,000-crore farm loan waiver, the restructuring of personal Income Tax slabs and the wide-ranging cuts in excise duty rates—the media and experts alike have missed one key point: 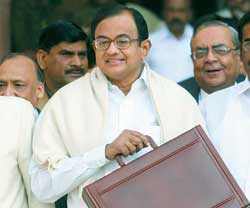 Chidambaram’s Budget
In all the hype and hoopla over the massive giveaways in Budget 2008—the Rs 60,000-crore farm loan waiver, the restructuring of personal Income Tax slabs and the wide-ranging cuts in excise duty rates—the media and experts alike have missed one key point: Finance Minister P. Chidambaram’s claim of having presented an “inclusive” Budget does not seem to pass the reality test.

In particular, Chidambaram and the spin doctors in the United Progressive Alliance government are hailing the writing off of farm loans to about 40 million indebted farmers as an “inclusive” measure. In an interview to this magazine a few hours after presenting the Budget, he told us to “please stand up and becounted. Are you for or against the farmer?” We are firmly with the Indian farmer, but we still beg to join issue with him. The Rs 60,000-crore loan waiver is a one-time arrangement. It does nothing to address the infrastructural and systemic issues that gave rise to that indebtedness.

The agricultural sector, which has been the one stumbling block to India’s 10 per cent-plus growth ambitions, needs massive and sustained flows of investments. Estimates vary, but anything between 30 per cent and 50 per cent of India’s farm produce perishes before it reaches the market. This loss is borne by the farmer and is probably one of the main reasons why he cannot repay his loans. Encouraging investments in rural cold storage and logistics chains to facilitate farm-to-fork linkages would have, in our opinion, done more for inclusiveness than the loan write-off.

Then, the Finance Minister could also have used his ministry’s overflowing coffers to announce a massive project, on the lines of the National Highway Development Programme (NHDP), to build and recharge basic farm infrastructure like irrigation canals and other sources of water. As the example of NHDP showed, massive public-funded projects create a virtuous cycle of related booms in industries that have linkages with the primary recipients of funds. Public investment, on such a massive scale, on the farm sector would have helped create rural infrastructure and incomes, provided a fillip to industrial growth and addressed the issue of inclusiveness.

The loan waiver may create a sense of euphoria— and, as is being hoped for in some circles, political indebtedness— in an election year. If properly administered, it can also provide some immediate relief, but will it really help the farmer over the long term? We don’t think so. That’s why, in our opinion, the Budget falls short on delivering on its stated theme of inclusiveness.

The best and the rest