Few finance ministers enjoy the comfortable buffer that P. Chidambaram did when he put together Budget 2008. A booming exchequer with tax revenues exceeding targets, a consistently growing economy and a robust inflow of foreign investment. 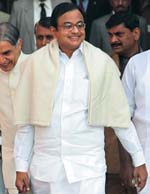 P. Chidambaram
Few finance ministers enjoy the comfortable buffer that P. Chidambaram did when he put together Budget 2008. A booming exchequer with tax revenues exceeding targets, a consistently growing economy and a robust inflow of foreign investment. Then, of course, there was the added comfort of continuity— this was Chidambaram’s fifth consecutive Budget, not something that every Finance Minister can count upon. What all this enabled him to do, in a year that is politically nothing but a run-up to the next general elections, is to give as much as he (or his government) wanted to give away to the people. So farmers, particularly the poor and marginal ones, got the big loan waiver; and the middle-class a much-welcomed tax relief. Clearly, Budget 2008, the United Progressive Alliance (UPA) government’s last one, is one that has more than a mere eye on the coming elections.

And, many expect those elections to roll around much earlier than the official end of the current regime’s tenure in April, 2009. Quite frankly, a please-all Budget, like the one presented by Chidambaram, shouldn’t have come as a surprise to anyone.

After all, with elections around the corner, it would be politically naïve to expect a tough, reform-or-die sort of a hard-line Budget from anyone who is even half as savvy as him. But to see Budget 2008 as merely an election year Budget would be missing half the picture. The other half is what is important.

Faced with a slight slowdown (GDP growth this year is expected to clock 8.7 per cent, down from last year’s 9.6 per cent), the threat of inflationary pressures thanks to slower growth in foodgrain production, as well as a global uptrend in oil and other commodity prices, it is a tricky time for a Finance Minister who is trying to help sustain growth as well as keep inflation under check. Add to that the rupee’s climb vis-àvis the US dollar and the ripple effect of a global slowdown.

Viewed against such a backdrop, Budget 2008 has probably done the right things. Forget, for the moment, the big giveaway to farmers and look at the rest. Complying taxpayers have been rewarded with exemptions that will put some extra money in their pockets; cenvat and excise duties have been brought down for a raft of products, most of which, like twowheelers, small cars and pharmaceuticals, have been hurt by slow growth; and more resources have been pledged for agriculture, which is in dire need of investment, health and education—to ensure that growth is inclusive and sustainable.

True, there has been no relief to India Inc. in so far as taxation is concerned but then Indian companies are effectively taxed at around 22 per cent if you factor in all the exemptions and concessions and that is not high by global standards. Instead, consider all the proposed tax cuts on their products and services, which if passed on to consumers will likely see bigger demand and, consequently, stimulate more production, which, in turn, will lead to higher investment. It is this demand-led growth cycle that the Finance Minister is hoping for from Budget 2008.

Seen together with the emphasis on agriculture, health and education, all of which is directed at the rural population and the poorest strata, Chidambaram’s fifth-in-a-row Budget has quite remarkably balanced three objectives: an effort to sustain growth, ensure inclusiveness and keep prices in check. Sure, there are questions that remain unanswered: How exactly is the government going to reimburse banks that have to write off Rs 60,000 crore worth of farm loans? Will the additional largesse bestowed upon the poor, through employment, education or health schemes, reach its intended beneficiaries? Prickly issues those and by no means unimportant. Yet, Budget 2008 is, at once, an election year Budget that is also designed to stimulate growth. No mean feat that.