Finance Minister P. Chidambaram is under tremendous pressure—to deliver a Budget that keeps everyone happy. There is, after all, the small matter of 10 state elections later this year and the general elections in 2009. 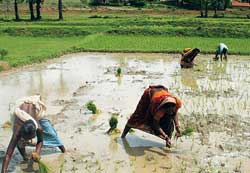 Waiting for some relief
Finance Minister P. Chidambaram is under tremendous pressure—to deliver a Budget that keeps everyone happy. There is, after all, the small matter of 10 state elections later this year and the general elections in 2009. The feel good mood of the previous years has given way to anxiety about the future—and even manufacturing and services, the growth drivers of the recent past, are showing signs of flagging. This incipient slowdown is actually a function of two factors—rising interest rates and the appreciating rupee. There are no major structural issues that need to be addressed.

The agricultural and rural sectors, on the other hand, are desperately in need of a large, and sustained, supply of oxygen. A vast majority of India’s population still depends on the farm sector, which now accounts for less than 20 per cent of the country’s GDP. So, it’s a no-brainer that a 21st century Indian equivalent of Franklin D. Roosevelt’s New Deal is required to ensure that all of India shines equally brightly. The World Bank’s World Development Report, 2008, argues that much higher public investment in agriculture and rural infrastructure is the only way to raise the incomes of the 300 million rural poor in India. So, Business Today hopes that Chidambaram will devote a substantial chunk of his Budget speech to, and reserve an equally substantial chunk of Budget rupees for, agriculture and rural infrastructure. Already, there are indications that the UPA government may announce a mega, Rs 32,000-crore debt relief package for farmers in the Union Budget. There is every likelihood of this package becoming a bottomless money sink. Why? Because most small and marginal farmers still don’t have access to institutional credit and depend on local moneylenders for their needs. How the government goes about providing relief at the level of the individual farmer will determine the success of this scheme.

We feel the Finance Minister will be better off paying heed to the recommendations of the Radhakrishna Committee Report that was submitted last year, which suggests the setting up a Rs 10,000-crore fund for agricultural development in 100 agriculturally distressed districts. It also proposes that banks provide farmers with a one-time long-term loan with which they can repay their debts to moneylenders. Then, the Budget should also walk the talk on institutionalising farm-to-fork linkages by providing incentives for large corporate investments in farming. According to estimates, up to 50 per cent of India’s farm produce perishes due to lack of proper storage facilities and other infrastructure linkages. Setting this up will require massive multi-billion dollar investments that farmers or the government are not in a position to make. So, this may be the right time to actually bite the bullet and take the plunge.

But will Chidambaram actually do these? That will be known only on February 29.