When I lived in the Philippines in the late 1980s, everybody spoke English with an American accent, there were jokes about being the "51st US state", the US military had a huge presence, and the economy was heavily indebted to a consortium of mostly-American banks. Fifteen years later I was listening to a JP Morgan executive in an office in Makati, the business district in Manila, tell me about how many more "seats" the investment bank had set up in its back office. The densely-packed tall buildings in Makati were buzzing with young Filipinos 24 hours a day and coffee, pizza and sandwich bars were doing roaring business. Another seven years down the road, Philippine call centres are eating India's lunch, and Indian firms are the stuff of much online mirth - they have even spawned the popular NBC sitcom Outsourced, where the "lovable" Todd Dempsey is parachuted into a faux-Mumbai to run a bunch of, well, Indian caricatures, and they were grist for Chetan Bhagat's pulp mill.

We say "IT-BPO" in the same breath, but the reality is that with few Indians truly proficient in English, the absence of a clear government-industry-university nexus on training and skill development, absurd staff turnover as our young and restless hurtle from one job to another, and even, as NASSCOM's Som Mittal put it recently, the need to take care of everything from transportation to protection for women call centre employees at night, India has just about priced itself out. 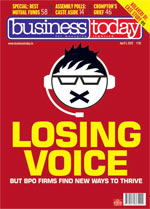 "When you get to the Philippines you will notice that all of their signage, their billboards, their radio, their TV, everything that they talk about is in English. You'll find that their favourite sport is basketball, and they follow the NBA more closely than we do here in America… It's a very Americanised culture," says Tom Milligan of Vector BPO in a provocative YouTube clip. So, how are Indian firms fighting back? They may be losing the voice battle, but that does not mean the end as Associate Editor Goutam Das and Special Correspondent Sunny Sen describe in our cover story.

The state assembly elections have blown like a scorching dust storm through the corridors of power. For the second time in a row, Uttar Pradesh has voted in a government with a clear majority. Mulayam Singh Yadav, as much as Mamata Banerjee, Jayalalithaa, Naveen Patnaik, Nitish Kumar, or Prakash Singh Badal, can stand up to the Congress party on everything from security to economic legislation. This issue hits the news stands just before the Budget, and we do not expect pleasant surprises. Will populism trump prudence? Read our election analyses.

With stock markets as volatile as they are - the BSE Sensex fell to its lowest close in five weeks the day after the election results - how will investors behave? They certainly seem to be chary of routing their money to mutual funds. Twenty-three of the 44 fund houses for whom data is available are carrying forward losses, and as Assistant Editor Rajiv Bhuva notes, retail investors, who make up 97 per cent of the investor population, accounted for a mere 24 per cent of mutual funds' assets under management as of September last year. Bhuva's analysis is one of the key features in Business Today's special package on mutual funds. In 1993, BT and Value Research, both very new then, came out with India's first-ever risk-adjusted performance ranking of mutual funds. This annual ranking continued till 1998, when the association broke off. This year, Value Research and BT have again come together in an exclusive partnership to rank India's best mutual funds. But the ranking categories are completely different and targeted at investors' risk-return profiles. You will profit by our study.