Over the past few years, rising incomes in urban areas and working couples have created a good demand for value-added dairy products. While the global demand has remained largely stagnant, the Indian market for milk and milk products is growing at 15-17 per cent per annum. That has made the milk market very attractive for new players. The fact that the value-added segment has better margins also helps.

From multinationals to home-grown start-ups, everyone is getting into the milk business. Meanwhile, the Gujarat Cooperative Milk Marketing Federation (GCMMF), which controls the Amul brand and is the biggest player in the milk market, has also matched the newcomers at every step. 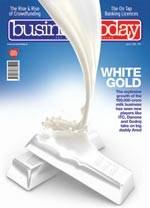 As a result, there is huge interest and investment taking place in the dairy business. From giants like Danone, Nestle and ITC to relatively new dairy players like Sarda, Parag and Prabhat, many new players are jostling for a slice of the pie. Several dairy companies have raised money from the stock markets through successful initial public offerings. Private equity companies have also poured in over Rs 900 crore into the milk market in the past few years. The brands run by various cooperatives - Amul, Mother Dairy (a wholly owned subsidiary of National Dairy Development Board) and Nandini (owned by the Karnataka Cooperative Milk Producers Federation) - still control a big chunk of the market, and are investing, too.

What makes the Indian market quite complex compared to other countries is that the bulk of the milk supplies are from small owners and farmers owning few cows. The cooperative model, therefore, has huge power. In western countries, most big dairy companies take milk from centralised dairy farms, which have thousands of cows and use machines extensively. The centralised operations allow for better control of both margins and quality. Buying from multiple sources is fraught with danger and uncertainty.

Still, the overall prize is too attractive to give up. Over the next few years, the milk products segment may see the most cut-throat battles in the FMCG market. Our cover story (page 46) by Senior Associate Editor Ajita Shashidhar looks at the dynamics of the milk market in detail.

On the subject of farmers and rural economy, Prime Minister Narendra Modi has focused on it quite seriously. He has announced his goal of doubling farm incomes by 2022. After taking charge of the government in 2014, Modi had announced the Model Villages initiative, which would make each Member of Parliament adopt one village and solve its problems. In our special package on the rural economy (page 66), we look at how the Model Villages initiative has worked out in practice, how realistic is the ambition of doubling farmer incomes in six years, and also whether the government actually has a plan for eradicating poverty in the next seven or eight years as announced by Amitabh Kant, CEO of Niti Aayog, the body that replaced the Planning Commission.