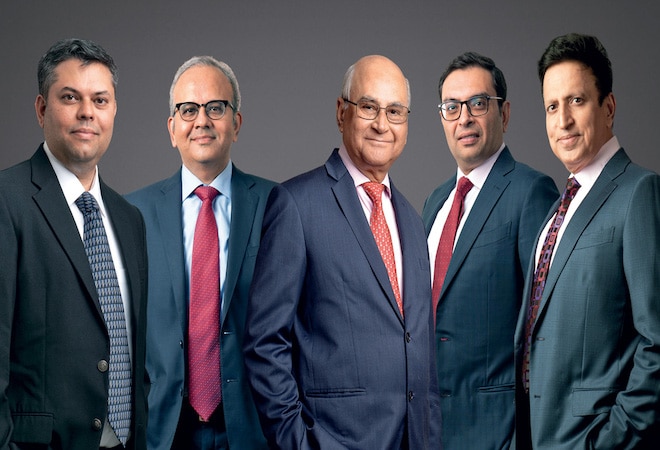 The year 2020 will be hard to forget due to the worst pandemic in a century. The stock market remained turbulent throughout, but plotted a V-shaped recovery to end the year at an all-time high. The Nifty closed 2020 at the threshold of 14,000, a solid 85 per cent surge from the low of 7,610 in March. Mid and small caps, which had been lagging for almost three years in a row, shot up to become the best performers. The Reserve Bank of India's (RBI's) infusion of liquidity into the system cheered bond markets as well. Riding out the market roller-coaster, some fund managers delivered extraordinary risk-adjusted returns while showing consistency in their performance.

The 8th edition of Business Today-Money Today (BT-MT) Financial Awards identified institutions in mutual fund, insurance and pension fund segments which, beating all the odds, stood as the top performers. From investors' perspective, these institutions did remarkably well in building their wealth within a controlled risk environment. 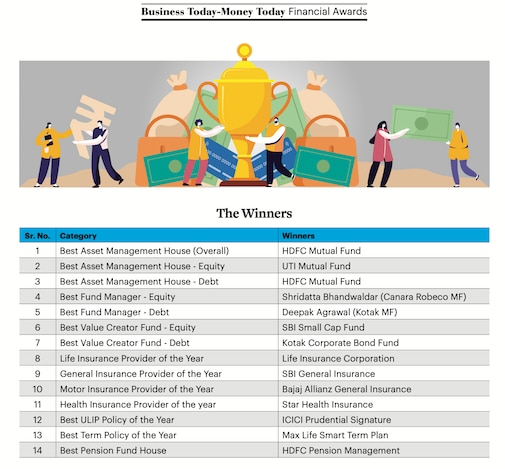 The BT-MT Awards had 14 categories. ICRA Online was the data partner for identifying nominees in mutual funds and Policybazaar was the knowledge partner for shortlisting candidates in the insurance segment. Money Today did in-house research to identify pension fund nominees.

The jury went through the nominations and selected the final winners after extensive deliberations.

Mutual Funds: The methodology for selecting the winners was developed in consultation with data partner ICRA Online. We considered mutual fund schemes with assets under management (AUMs) of Rs 500 crore or above which had a track record of at least four years, to have an idea about their immediate and mid-term term performance.

However, in case of debt funds, all the three categories were given a weight of 20 per cent each. Periodic Return was arrived at after taking into account one-year, three-year and five-year returns. Relative Return was assessed by looking at the funds' performance during bull and bear phases and returns during both phases were given equal weights. For Return Consistency, we took daily rolling annual returns over the past three years.

In the Best Value Creator Fund Equity category, we looked at diversified funds that do not focus on a particular sector or industry. To arrive at the Best Value Creator Equity Fund, open-ended diversified funds in large cap, mid cap, multi cap, small cap, large and mid cap, ELSS and value-oriented categories were considered. The risk score was calculated on the basis of downside standard deviation. The risk-free return taken for this was 6 per cent. From the overall risk weight of 40 per cent, we took out 5 per cent and assigned it to churning, as higher churning leads to higher costs and reflects the weaker conviction of the fund manager.

In the Best Value Creator Fund Debt category, we focused on funds attractive to retail investors. The categories considered were Credit Risk Fund, Medium Duration Fund, Short Duration Fund, Dynamic Bond and Corporate Bond Fund. The risk parameter was divided into two categories of volatility and credit risk, with each having an overall weight of 20 per cent. Volatility score was calculated on the basis of standard deviation. Credit risk was assessed on the credit quality of securities in the funds' portfolio.

Insurance: A number of parameters were considered to select the winners in life and general insurance categories. These included customer service and satisfaction, size and scale, business growth, financial strength and prudence and regulatory compliance. Policybazaar was our knowledge partner in the insurance category. The products in focus included term plans and unit-linked insurance plans (ULIPs).

Under Product Strength and Customer Delivery, we gave the highest weight to persistency ratio and claims paid. The fundamental idea of insurance is to get claims settled at the unfortunate time.

The features of a term plan such as benefit payout options, riders, coverage, premium paying term, policy term and in-built facilities enhance its strength. The more feature-rich a plan is, the more likely it is to meet the diverse requirements of customers.

To select the ULIP of the Year, two core areas - product performance and product strength - were evaluated. The first-year-linked-premium criteria gave a clear insight into product performance compared to competitors. Return performance was assessed by looking at periodic return and relative return. To gauge periodic return, performance of blue-chip funds was considered for a uniform comparison of how investments in these products performed over a seven-year period. Relative return was calculated in comparison to Nifty.

In case of selecting the Best Health Provider, claims settlement was provided the highest weight of 25 per cent. Claims paid within 30 days were also given a high weightage of 20 per cent.

Pension Funds: We have considered the pension funds under NPS Tier 1 category. Three categories of schemes - equity, corporate debt and government securities - were taken. Pension funds with a minimum of five years of track record were considered. To select the nominees for the Best Pension Fund Provider category, we considered both return and business growth. We have given 75 per cent weight to returns and 25 per cent weight to AUM growth in 2020 over the last year.

To find out the return score, returns since inception were given the highest weight of 40 per cent. One-, three- and five-year returns were given an equal weight of 20 per cent each.

Top three fund houses with the highest final score were selected as the nominees.