Y.M. Deosthalee, Chief Financial Officer with Larsen & Toubro, was restless. He had been chosen the overall Best CFO by the Business Today/YES Bank jury, but had to leave for Singapore on the very night, July 5, for which the awards were scheduled. He reached the ceremony venue well in time, but had to keep one eye fixed firmly on his watch. Finance Minister Mukherjee strides in with India Today Editor-in-Chief Aroon Purie as YES Bank MD and CEO Rana Kapoor greets him
Immediately after collecting both his awards - he also won in the category of Best Transformation Agent (Large Companies) - he dashed off to the airport, barely making his flight, but missing out on the group photograph of all the winners taken as the ceremony ended.

Deosthalee's packed schedule is a reflection of the changing role of the present-day CFO, and the high pressure existence he is forced to lead. "The CFO is no longer the boring person with eyes only on revenues, expenditure, and cash reserves," noted India Today Editor-in-Chief Aroon Purie in his speech at the ceremony.

"Chairpersons and managing directors may be the public face of most companies, but the CFOs seemed to have been at the helm, steering their ship away from the shoals of financial disaster." Aroon Purie and Rana Kapoor at the event
The event kicked off with BT Editor Chaitanya Kalbag explaining the rigorous selection process. YES Bank MD and CEO Rana Kapoor said the winners were among the world's best. "These CFOs have supported their CEOs in ensuring a high level of corporate governance," he said. "Their astute financial management in difficult times has ensured that there is no panic."

In his speech that followed, Purie drew parallels between the tasks of CFOs and journalists saying, "You (CFOs) have to get to the truth, and be balanced and objective." He added that Mukherjee, as CFO of the country, had a tough job. "As a parliamentarian for 42 years, he has steered key ministries, such as Commerce, Defence and External Affairs, and now heads an incredible 13 of the 14 empowered groups of ministers in the government," he said.

Chief guest Pranab Mukherjee is invited to speak by Aroon Purie
Mukherjee, who spoke next, noted that though the overall GDP growth in 2010/11 was estimated at 8.5 per cent, there was no reason why the existing momentum could not be maintained and the growth figure improved. "Several forecasts say India's growth will start to outpace China's in three to five years, and continue at a faster rate than any other large country in the next 20 to 25 years," he said. The rapt audience at the Kamal Mahal auditorium, ITC Maurya, New Delhi
He highlighted factors that would affect the inflation rate, including incomplete pass-through of higher crude oil prices, geopolitical uncertainty in West Asia and North Africa, and a spike in raw material prices. Mukherjee added that the private sector also had a role in solving structural problems. "One trillion dollars of investment is required in infrastructure during the 12th Plan (2012-17) of which more than half will have to come from the private sector," he said.

In his speech after receiving his awards, L&T's Deosthalee said they were a "recognition for the company which empowers you to perform, and encourages you to excel and compete. As far as I'm concerned, I just happened to be here". Pranab Mukherjee, Aroon Purie and Montek Singh Ahluwalia, with BT Editor Chaitanya Kalbag
Maruti Suzuki's Ajay Seth, who won the award for Best CFO in Liquidity Management (Large Companies), said his company had struck a balance between growth and liquidity by sticking to the basics and not going overboard.

The FM sees no reason why GDP cannot rise by 8.5 per cent this year
Ahulwalia, who spoke later, reiterated Purie's assertion that the CFO today was very different from the traditional view of a person who only watches the bottom line. "It is entirely appropriate that there has been this award instituted for CFOs," he said. "We still designate CFOs in public sector companies as director, finance. 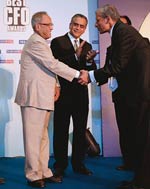 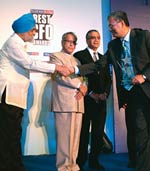 Indrajit Banerjee of Cairn India (right) shakes hands with Ahluwalia
I'm going to request our colleague in charge of public sector enterprises to re-designate them as CFOs." On economic performance, he said: "The task before us is to achieve between nine and 9.5 per cent growth. I don't want to pre-judge, but I don't think it is all that unreasonable."

After the ceremony - which had Mazars India as associate sponsor, The Glenlivet as partner, Graphicsad as out-of-home advertising partner and Bloomberg UTV as television partner - the guests mingled over dinner.
TweetYoutube