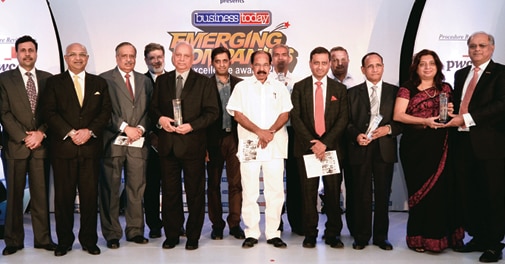 For D.C. Jain, Chairman of Delhi-based Akums Drugs & Pharma-ceuticals Ltd, recognition from Business Today came as a significant milestone. His company received the overall Best Emerging Companies Award in the Business Today-YES Bank Emerging Companies Excellence Awards 2013 function held on September 27 at the ITC Maurya hotel, New Delhi. "That we have been recognised is the biggest achievement for us," said Jain.

Business Today is the only business magazine to institute an award to recognise excellence in emerging companies. The criteria for consideration for the inaugural round of awards this year were that the company should be unlisted, innovative, and mid-sized (turnover of Rs 200-1,000 crore in 2011/12). Some 526 companies applied for the award, of which 177 made it to the second phase of the contest. 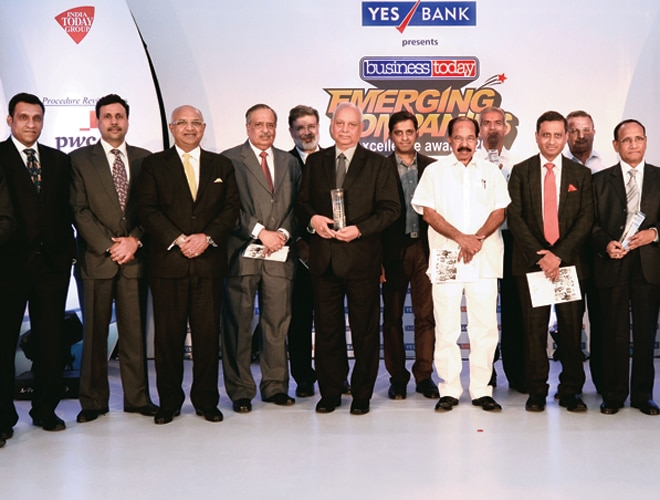 Winners of BT-YES Bank Emerging Companies Excellence Awards 2013 with chief guest Union Minister for Petroleum and Natural Gas M. Veerappa Moily (centre), guest of honour M. Damodaran (seventh from right), Business Today editor Chaitanya Kalbag (eighth from right). Amit Kumar of YES Bank is sixth from right (in dark suit, in front)Photo: Shekhar Ghosh and Sounava Ray Sarkar
Jain said: "We never expected we would win. We have 30 years of experience in the pharmaceutical line. Akums was formed in 2004/05, and we made profits beyond our expectations. We supply to many big pharma companies in India. We have six units in Haridwar and our manpower strength stands at 5,000." His company also won the award for corporate governance.

Union Minister for Petroleum and Natural Gas, M. Veerappa Moily, was the chief guest of the awards ceremony. During his inaugural address, he underscored the need to reduce India's oil and gas imports, and said India could become energy independent by 2030.

He said: "I've now appointed a committee under the chairmanship of [economist] Vijay Kelkar, and I've given him a mandate: by 2020, 50 per cent of imports should be reduced, which should become 75 per cent by 2025." He added that the government should take bold decisions in the energy sector. He shared the success story of a nine-million-tonne refinery in Barmer, Rajasthan, which will make indigenous oil available in two to three years.

"Emerging entrepreneurs can unleash the energy of this country," he said. "With the kind of demographic dividend we have, in another 10 to 30 years, the youngest population as well as entrepreneurship will take India to the next level." Guest of honour M. Damodaran, D.C. Jain, Co-founder of Akums Drugs & Pharmaceuticals, winner of the overall award, Chaitanya Kalbag, Minister M. Veerappa Moily, Amit Kumar of YES Bank, and Akums Director Sandeep Jain
For almost 22 years, Business Today has been recognising excellence in business through a series of surveys and awards. This year, given the economic conditions, it was time to come up with a new category of recognition - emerging companies, where there is a lot of activity.

Business Today Editor Chaitanya Kalbag said: "We sought the help of the Ministry of Corporate Affairs for databases of unlisted companies through the Registrar of Companies. YES Bank was our knowledge partner and PricewaterhouseCoopers did all the checks and balances for us."

Besides the overall award, there were eight other honours, of which five were for financial performance. In the third phase of the competition, a five-member jury went through the short list of nominees and chose the winners. The jury, chaired by Ashok Chawla, Chairperson of the Competition Commission of India, also included G.N. Bajpai, former chairman of the Securities and Exchange Board of India (SEBI) and current Chairman of insurer Future Generali, Shardul Shroff, Managing Partner at law firm Amarchand & Mangaldas & Suresh A. Shroff & Co, Ravi Sud, Senior Vice President and CFO of Hero MotoCorp, and Bakul Dholakia, former director of IIM Ahmedabad and current Director of the Adani Institute of Infrastructure Management and Gujarat Adani Institute of Medical Sciences.

Kalbag noted that the award-winning companies had performed consistently well, during times of good and poor economic growth. "These are the ones who are going to be tomorrow's top corporate leaders," he said. "We recently gave away awards in the SME sector. It's a natural evolution from SMEs to emerging companies." The BT 500 list would be next, he added. "We track corporations in all stages of their development."

"We feel humbled that we have got the award," said Brig Dr Arvind Lal (Retd), Padma Shri award winner and Chairman and Managing Director of Dr Lal PathLabs. He said his company had 4,000 people and 200 pathologists in 150 labs and 2,500 collection centres across the country.

Ahmedabad-based Eris Lifesciensces Ltd won two awards - one for Scalability of Business Model, and one for Managing Operational Efficiencies. "We are happy to be selected," said Amit Bakshi, Chairman, Eris Lifesciences Ltd. "Next, from one of the best emerging companies, we want to become one of the best companies." Started in 2007, Eris has scaled up rapidly - its revenue has grown 48 times since the first year.

The guest of honour was M. Damodaran, former Chairman of SEBI and the Unit Trust of India. Now, as Chairman of Glocal Healthcare Systems, he is involved in pioneering work by bringing affordable health care to small towns. He is also the chairman of Indian Institute of Management, Tiruchirappalli.

He said: "This is a very good endeavour, as you are not rewarding the biggest, but you are rewarding the next set of people who aspire to size, profitability and the highest level that they can reach. These are tomorrow's multinational giants who will bear India's flag as they have the energy, ambition and enthusiasm." He said there should be more categories in the Emerging Companies Excellence Awards next year.

Rival players in India Inc working together for larger goal