Click here to Enlarge
There were awards in five categories: Education, Environment, Health care, Empowerment and Livelihood. Microsoft India was co-winner in the Empowerment category along with the gem and jewellery heavyweight, the Gitanjali Gems. "Our flagship CSR programme, Project Jyoti, aims at bridging the digital divide in the country by making underprivileged sections computer-savvy," Dhasmana added. She also noted that some of her company's initiatives went well beyond conventional CSR: it is consistently working on adding disabledfriendly features to its software. 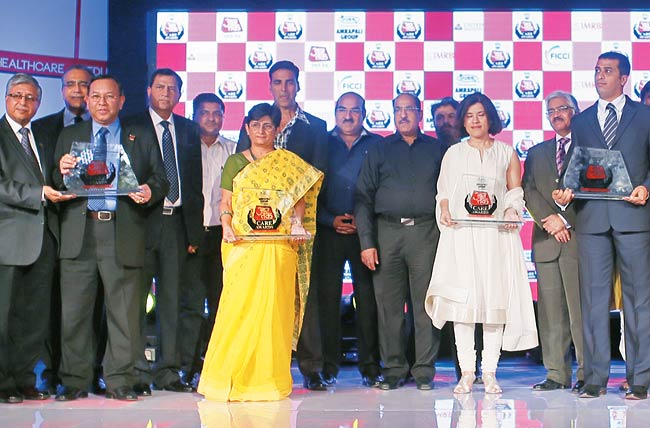 Other winners included direct selling giant Amway India in the Education category, wind energy leader Suzlon Energy in the Environment category and Standard Chartered Bank in Health care. Amway supports a host of orphanages. "It is not just about doling out cheques," said Yoginder Singh, Vice President, Legal and Corporate Affairs, Amway India. "Our employees also get actively involved in health, education and sanitation initiatives at these orphanages." Leading business process outsourcing firm Firstsource Solutions was co-winner in the Livelihood category, along with Bharat Petroleum Corporation. "We have been into CSR activities for a decade," said Shivprasad Shetty, General Manager, Client Relations, Asia Business Unit at Firstsource. "We don't let the slowdown affect them either." Akshay Kumar takes the stage with some of the children who attended
In his speech, Mukherjee exhorted business leaders to promote more philanthropic activities, following the examples of Tata, Godrej, HCL, Mahindra, Wipro, among others. "The winners of these awards have gone beyond their role as wealth creators and created value for society at large," he said. "This will go a long way in inspiring other corporate houses to serve society in more efficient and meaningful ways." Finance Minister Pranab Mukherjee with Aroon Purie
Realty major Amrapali Group was the event's main sponsor. "CSR comes largely out of the voice of conscience," said Anil Kumar Sharma, Group Chairman. "The intention is to provide relief to those who need it most." Ashish Bagga, India Today Group CEO, agreed. "The important thing is that corporate houses are taking time out to run these initiatives," he said. Ashish Bagga and Satpal Gulati awarding PVR's Selena Bijli
"This act of giving goes beyond the companies' goods and services and profit and loss accounts." Joy Chakraborthy, CEO, TV Today Network, felt similarly. "These are the real champions of corporate India, the companies which have gone beyond their corporate objectives of growth and profitability, and made improving society their larger objective," he said.

Joy Chakraborthy and Anil Sharma with officials from JK Lakshmi Cement, which won in the Health care category
Thanking the finance minister for gracing the occasion, Aroon Purie, Editor-in-Chief of the India Today Group, noted that news channels were often accused of concentrating exclusively on all that is going wrong in the country. "But these awards are good news and make us focus on the positive developments," he said. "The need for CSR activities is felt even more as income disparities grow and the expectations of those left behind rises."

Aroon Purie and Pranab Mukherjee with executives from Suzlon Energy, which won in the Environment category

Joy Chakraborthy and Anil Sharma with representatives from Eli Lilly, which also won the award in Health care
Adding colour to the event was Bollywood star Akshay Kumar, who also launched the Aaj Tak Care Awards anthem. "You always feel good when you repay to society," he said. Other celebrities in the audience included cricketers-turnedpoliticians Mohammad Azharuddin and Kirti Azad, BJP leader Syed Shahnawaz Hussain, and Dabur India's Pradip Burman. The awards were given away by Mukherjee, Purie, Bagga and Satpal Gulati, Vice Chairman, United Group of Institutions, a leading education provider and associate sponsor of the event, besides Chakraborthy and Sharma.

Federation of Indian Chambers of Commerce and Industry was the knowledge partner and IMRB International the research partner of the awards. Black Dog was the beverages partner and Pioneer Publicity Corp. outdoor advertising partner.

Teeing off in Dubai

BT's 'Most Powerful Women': The Changemakers