Entrepreneurs and HR practitioners discussed the role of analytics in HR and deliberated on whether attrition can be looked at positively.
By E. Kumar Sharma | Print Edition: March 13, 2016 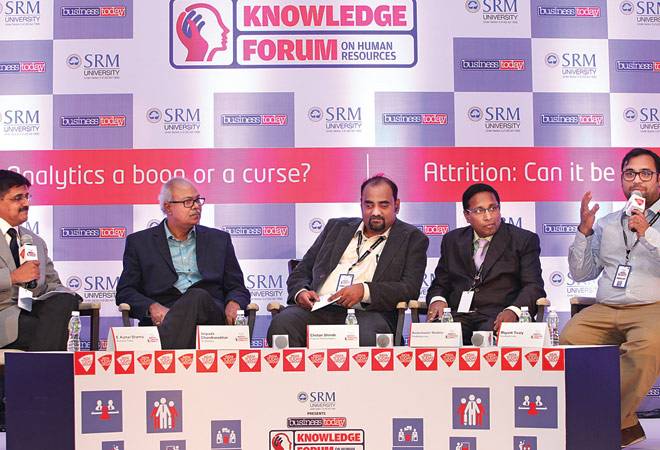 Hyderabad's Trident Hotel was the centre of activity in the city on the evening of February 11. And why not - Hyderabad's HR community descended in droves on the hotel to witness two scintillating panel discussions on two burning issues: (a) Analyse IT: Is HR Analytics a boon or a curse?, and (b) Attrition: Can it be a good thing? Both discussions were moderated by BT's Associate Editor E. Kumar Sharma.

The first topic, on the impact of analytics in HR, started off with Mayank Tivary, Recruiting Lead, Facebook India, saying that HR is very qualitative, and the difficult part is to handle the quantitative aspect, adding that Facebook has built in processes that can capture the quantitative aspect of HR. Raamchander Maddela, Executive Vice President & Head - Corporate Strategy & HR, Foodmingo.com, said that HR analytics is very useful. He gave an example of how analytics tools can be used to analyse the performance of campus hires from different colleges in the company, and predict which colleges would be better to hire from.

Chetan L., Vice President-HR, Pramati Technologies, said he was amazed by the kind of advances by analytics today. Giving an example of predictive modelling, he said: "If I need to hire a data scientist in Hyderabad, analytics tools are able to even predict my success ratio, and for that they don't just rely on internal data, but also use market intelligence - number of similar positions in the market, what rivals are paying, etc." Chandrasekhar Sripada, President & Global Head of HR, Dr. Reddy's, started by saying that "HR Analytics" is a hot new buzzword, promising exciting careers to HR people and trying to lend some legitimacy to the "so-called qualitative and, therefore, dismissable HR". He then went on to add that the advent of analytics in HR is a very welcome trend, because "human resource related decisions cannot be left to mere intuition and gut, and we cannot forever hide under the thing that HR is all about touchy-feely, goody-goody relationships".

Overall, the discussion ended with near unanimous approval that analytics in HR is indeed a boon and not a curse.

The second discussion, on attrition, began interestingly. T. Sreedhar, MD, TMI Network, said: "Why is it that companies never say we have retained 88 per cent (of the workforce), but instead only say attrition is 12 per cent? Why can't we look at it positively?" B. Prasannatha Rao, Executive Vice President and Head of HR, Coromandel International, pointed out that attrition is inevitable, and it is also unpredictable. "But what is important is what your workplace analytics say. Is there a pattern?" Rao said that attrition is always contextual: "Even if I lose only four people who are key to operations, it is definitely a concern."

Sucharita Rao Palepu, Global Head-People Practices & Frameworks, Tech Mahindra, pointed out that the IT industry faces attrition rates of 16-18 per cent, and higher in BPO, which is a challenge. "All attrition is not good," she said, adding that IT companies have five generations of people working in them. "There are some people who are unable to scale, not productive, poor performers, but that is not more than 4-5 per cent. But the kind of attrition we are seeing is not a good thing."

Sulakshan Kumar, Co-founder & CEO of start-up MySmartPrice, said that a company is as good as its people. "So, attrition is always a matter of concern - whether high or low. There is no right balance," he said, adding that two years ago, MySmartPrice had 50 people and zero attrition. Today, it has seen exits of eight or nine people in a workforce of 150. "I feel, is something wrong?"

Narayanrao K., Chief General Manager-HR, NCC, disagreed with Kumar: "Attrition - a particular percentage - is always good, because you have people joining from various backgrounds, so sometimes you need to have fresh talent coming in. And internally, people who are averse to upgrading their skills, for them turnaround is necessary."