How the west was won

The Western round of BT’s Annual Acumen Quiz and Debate contest set pulses racing in Mumbai.

Winning Stroke: Harsha Bhogle hosts the BT Acumen Quiz Show. Some of West Zone’s best B-schools made it to the exciting western finals
Competition for the final spots of Business Today’s annual business quiz and debates for B-schools heated up as the show entered its western zone leg. At the jam-packed auditorium of Welingkar Institute of Management Development & Research, some of the best B-school brains from Western India (schools like Jamnalal Bajaj Institute of Management Studies, Indian Institute of Management Ahmedabad, Narsee Monjee Institute of Management Studies) engaged in some riveting cerebral warfare on October 4. Hosted by Harsha Bhogle, the competitors were judged by Ajay Kakar, Chief Marketing Officer (Financial Services), Aditya Birla Group; Brian Carvalho, Managing Editor, Business Today; and Nandini Dias, Chief Operating Officer, Lodestar Universal. The event kicked off with the western zone semifinal debate. The topic “Is Indian industry globalised enough, or are we still happy to be big fish in the India pond?”

“Considering the fact that IT exports have improved the country’s balance of payments situation and that the Tata Ace is making inroads in African markets and a bike like Pulsar sells in Indonesia, it’s very clear that Indian companies are making their mark on the global stage,” started off Shipra Bhalla, a student from SP Jain Institute of Management, who spoke for the motion.

Debate winners
Speaking against the motion, Sonia from Jamnalal Bajaj Institute of Management Studies made an interesting point: “Just enter the name of any large Indian company on Google and a spell-check error will turn up. Try that with the name of a Japanese company and you will see the difference.”

Given the rather technical nature of the next topic “Are high interest rates causing or curbing inflation?”, the debate competition took a rather interesting turn. As the confidence levels of the participants dropped just a wee bit, technical jargon flew thick and fast. The audience struggled to stay clued in, the decibel levels of the participants from IIM-A and KJ Somaiya Institute of Management Studies & Research rose to a crescendo. That prompted Harsha Bhogle to come up with the quip of the day to one of the participants: “Did somebody ever tell you that you are a great hedge against a power cut?” In the end, participants from IIM-A (powered by some sound vocal cords and lots of energy), SP Jain Institute of Management (measured, well poised arguments), made it to the next round.

Alumni Quiz winners
It was time for what wrestling promoters call the showstopper—the main event, the quiz. Four institutes had made it to the western zone finals—Symbiosis Centre for Management & Human Resources Development (SCMHRD), Narsee Monjee Institute of Management Studies (NMIMS), Symbiosis Institute of Business Management (SIBM) and SP Jain Institute of Management. Questions like “which is the only modern wonder of the world to have a Starbucks outlet in it?” were answered in a jiffy. The answer: The Great Wall of China.

Or what’s the flying kangaroo? Answer: Australian airline Qantas. NMIMS, after a lukewarm start, caught up big time in the “pictorial” round of the quiz. By Round 3, it was almost a two-horse race between NMIMS (Shantesh Akerkar and Tarun Shetty) and SIBM (Tarun Aggarwal and Devesh Saboo). In the end, Symbiosis kept its cool, its slender lead and emerged as the winners of the western zone quiz finals. Sterner tests await them in the national finals. 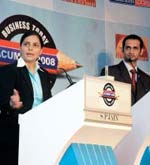 Debate winners
It was time for the B-school debate finals. And the topic, a rather intricate one, was—Who’s important for a company: The stakeholders or shareholders? Shipra Bhalla of SP Jain, throwing her lot with stakeholders started off her argument on a rather strong and controversial wicket, “Tata did not please all its shareholders and lost Rs 500 crore in the process.”

IIM-A, sticking to bombastic style of oratory, argued thus: “It’s on the shoulders of the shareholders that a company stands.” After a nearly half an hour of lively questioning and debating, SP Jain Institute of Management made it to the next round. Considering the animated and lively nature of debate in the preliminary rounds and the zonal levels, the finals promises to be a treat for all quizzers and debaters
TweetYoutube