The India Today Conclave of 2016 got off to a roaring start with a discussion between Union Minister of Finance Arun Jaitley and a group of leading economic thinkers.
Team BT | Print Edition: April 24, 2016 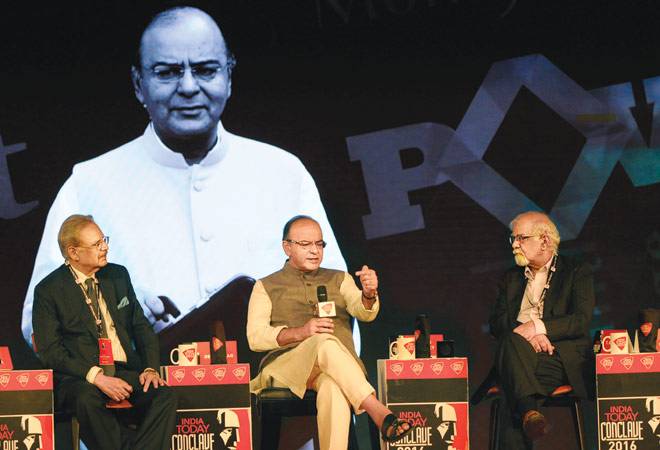 The India Today Conclave of 2016 got off to a roaring start with a discussion between Union Minister of Finance Arun Jaitley and a group of leading economic thinkers - Surjit Bhalla, Chairman and MD of Oxus Investments; Y.C. Deveshwar, Chairman of ITC; and eminent journalist T.N. Ninan. The discussion focused on the subject "Double Digit Growth: Can You Deliver It?", and it was moderated by Raj Chengappa, Group Editorial Director (Publishing) of India Today Group. Edited excerpts.

Raj Chengappa: Arun, let's get to the topic of the day. How can you deliver double-digit growth for India?

Arun Jaitley: Well I think you need a combination of several factors. When you look at the current 7-7.5 per cent growth rate compared to how the world is doing, this indeed looks very impressive. But compared to our own inherent ability, one always feels that India can do much better. Now, if India is to increase by 2 per cent, 2 per cent-plus over and above our present capacities, I think a combination of several factors would be required. You'll need a supportive global environment because the present global environment has its own share of challenges for India. Global markets are shrinking, global trade is shrinking and obviously our own export is shrinking. There is a lot more volatility than we would have otherwise liked, though the current scenario with regard to the oil prices is one factor that stands out as something which is helping us.

Domestically I think the maximum potential to grow in terms of sector is agriculture, in terms of geographical region it's the eastern part of India and, therefore, if you were to concentrate geographically on the east and sectorally on agriculture, there is huge potential for growth. We can do much better in manufacturing if we develop an expertise particularly for low-cost manufacturing, considering that the wage bills in China are going up, and of course you need a reform temperament in the country.

I think the good news is that the constituency that supports reforms today is much larger than it was ever in the past, it's much bigger than the one that obstructs reforms and, therefore, slowly but surely we are moving in the direction where step after step you move in the right direction itself. And therefore if all the policy changes - taxation and otherwise - do come about in India, you have a better monsoon, we are able to step up investment both in agriculture and in the eastern parts of India. I don't think it's impossible for India to get a significant amount of additional growth.

T.N. Ninan: The global environment is not supportive, many of our real numbers are not showing up very well, we ourselves have never actually done double-digit growth, and incrementalism is not designed to get you the scale of reform that you need to do double-digit growth. So, should we say that even if we do 8 per cent plus, we should be more than happy?

Jaitley: Well, I think you have a valid point because realistically speaking the current global environment is not an environment where anyone in the world can achieve double-digit growth. And therefore the discussion really is theoretical, it's based on a premise that this kind of a situation or cycle doesn't last indefinitely. Therefore, given the various variables, can we at least aim high and improve? For example, if you carry out some of the pending reforms that are still there, if you concentrate on some of these areas which I have just mentioned, if you are able to improve the health of our banking systems to be able to support growth, and your private sector becomes more oriented towards investment, then even if you are not able to go anywhere close to double-digit growth, the prospect of greater economic activity and improving upon your present rates is always there.

Y.C. Deveshwar: It's very heartening that you focused your budget around rural growth and even went to the extent of saying that you would double farmer income by 2022. By envisioning something that is courageous of this order, you try and compel a strategy and also align forces, because if income in rural areas go up then it is like killing multiple birds with one stone - there are many social benefits, industry begins to grow, the food processing industries grow, and so on. So, while the vision is very laudable, what is your strategy to get farmer or rural incomes doubled by 2022?

Jaitley: I think you have a point when you say that you are aiming high, you are setting a target which is extremely difficult and you are then aiming to reach the destination. Now a back-of-the-envelope calculation by a critic would be that if you are to double their incomes, is farm income in India going to grow by 14 per cent a year? That's a point of criticism. Obliviously it is difficult if not impossible, because Indian farm incomes, agriculture growth doesn't take place at that pace.

But then, you see we are not merely speaking in terms of income from agriculture. What about milk, what about animal husbandry, what about other areas you would want to encourage? Now, you have several states where rural income is not merely agricultural income - it is also income added from all these other sources. Now, one of the important agenda which the country by and large is accepting is, instead of only industry-related reforms or policy-related reforms, there are important expenditure-related reforms. And therefore, you spend three times the amount this year on rural roads, you spend huge amount on irrigation - though it's a state subject, the Centre is assisting it with all the money at its command and the new fund that we are creating with NABARD to help in irrigation projects because that always brings returns.

If you look at the experiment of Andhra Pradesh during the earlier Congress government, Gujarat and, more recently, Madhya Pradesh, some of these states have seen a huge amount of growth in agriculture thanks to the investment in irrigation. There have been years where Madhya Pradesh has gone up to 18 to 20 per cent growth in agriculture in a single year because they were able to not only have minor irrigation projects, but also transport water from one part of the state to the other. Now, states like Gujarat have added the milk income to it over the past 50-60 years. Over the next few years, you have to concentrate your expenditure year after year in this direction and if we are able to do it from housing to toilets, to irrigation, to roads, to electrification, to irrigation, I think we are capable of significantly pushing up activity in the rural areas itself.

Surjit Bhalla: For the last few decades, every beginning of a decade, I have said that India should grow, has the potential of growing at 8-10 per cent. So, I am completely empathetic with that vision and with that goal. However, I have been proven wrong for the last 35 years So, what is it that your party and you intend to do in terms of policies, in terms of strategy (to achieve double-digit growth)? To prove me right for a change, and for India, more importantly, to achieve its potential. 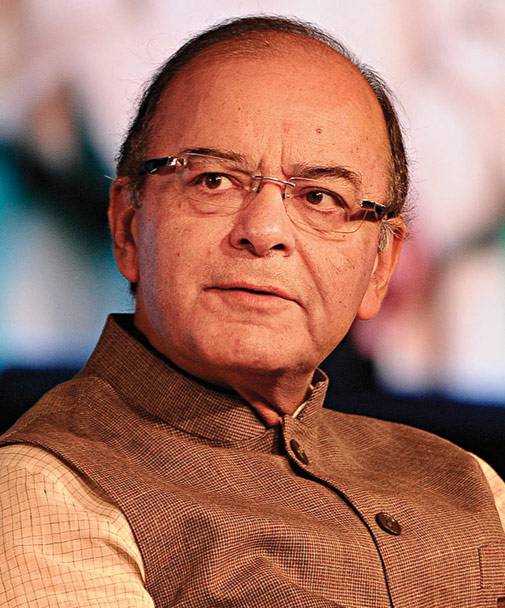 Jaitley: Surjit, I think that the idea is to improve upon our growth rates even in an adverse global environment. Now, I don't claim that it's possible in this global environment to come anywhere close to double-digit growth It's extremely difficult or practically impossible to do that. Its only when the global tail winds are behind you that it adds another per cent or two to your own potential. But I think there is a lot that India can still do in order to improve. For instance, I took only a small step this year on my promise on direct tax reforms; settling all disputes, rationalising rates, bringing down corporate rates. I only made symbolic changes this year and the idea was to express a determination that the target really is 25 per cent. Even though if you recollect last year when I announced this, Parliament in the first instance didn't understand it. And the only point on which I had some hostile noises is when I said that corporate rates must come down to 25 per cent. And when in the course of the debate I explained to them that corporates must have surplus to reinvest and you can't compete with global economies unless you have global taxation rates.

Slowly, I think the political system started understanding this today, except one political party which also now has started saying, at least with one amendment or so, we would like to support it. Almost everybody else has come around including UPA allies. All of them - the JDU, RJD, NCP - each one of them has told me that they will support the goods and services tax. So, now these are some important measures.

For example, today you are passing through a stage where because of the NPAs, the banks are stressed. Therefore, knowing normally how Indian politics operates, it would take us a couple of years before we could probably draft an insolvency law and put it into action. I introduced it in December and when I speak to you in March, the committee has been working on it almost by the day and promised to give me a report in another two to three weeks from now. So, I think there is a significant amount of change in terms of policy as far as Indian politics is concerned.

A law like Aadhar, it's taken us seven to eight years to debate it before we could put it in action. I announced it in this year's Budget on the 29th of February. And today as I speak to you on the 17th of March, within 18 days, it has become a law. I spoke in terms of some of the changes we were doing in the oil and gas sector. Within 10 days of the budget, they have already been implemented. So, it is possible in India to effect policy reforms and I think therefore, policy reforms and expenditure in the direction which I have indicated is probably the best that India can do under the circumstances, with of course one big question as to when the private sector starts investing.