She is the first winner of an award instituted this year - that of Best Woman Chief Financial Officer (CFO). Resplendant in a green-and-gold sari, Jyotsna Sharma, CFO and Vice President (IT), NRB Bearings, explained why women make good CFOs, especially during economic slowdowns like the present one. "We are used to working under constraints," she said. Why then are women CFOs still a handful? "We need more visibility," she said. "We need more events like Business Today CFO awards. Only then will role models emerge to inspire and motivate more women to join our ranks." India Today Group's Chairman Aroon Purie addresses the audience
The occasion was the third edition of the Business Today-YES Bank Best CFO Awards held at ITC Maurya, New Delhi, on April 11. As in the previous two years, this time too, the chief guest was none other than the 'CFO of the country', Finance Minister Pranab Mukherjee. Minister of Corporate Affairs M. Veerappa Moily, who is trying hard to enhance corporate transparency by working closely with CFOs of the country, was the guest of honour. Mukherjee and Moily jointly gave away the awards.

All the prize winners attended, barring TCS CFO S. Mahalingam, who was represented by his colleague and Vice President Tanmoy Chakrabarty. The hall was full to overflowing with guests by the time Mukherjee arrived.

"We are passing through a difficult time," said Mukherjee, speaking on the occasion. "But I am an optimist… because of the experience I have had over the years." Mukherjee, whose political career spans more than four decades, including three stints as finance minister, should know. During one such stint in the early 1980s, when Indira Gandhi was prime minister, he brought inflation down from 16 to 2.5 per cent. Mukherjee added that there was no reason to lose either heart or confidence in the country's economy. But a transformation would not come easily. "We will have to be tough," he added. "We cannot delay the process of taking hard decisions."

Greatly appreciative of the CFO awards, Mukherjee said they were a means by which society acknowledged the silent contribution of CFOs to its well being. In his speech, Corporate Affairs Minister Moily was equally effusive. "The CFO is increasingly becoming the chief flag bearer of corporate transparency, governance, corporate social responsibility and also protecting shareholders' money," he said.

(From left) Rana Kapoor, Pranab Mukherjee, Veerappa Moily and Aroon Purie, minutes after the Best CFOs special issue of Business Today is unveiled at the awards ceremony
Moily also noted that two decades of economic reforms had miraculously transformed the economy. But he added more remained to be done. "It is now time for governance to supplement the change," he said. "Governance perhaps still needs transformation." Moily assured the new Companies Bill would be implemented soon.

Moily went on to emphasise that the impressive growth trajectory India had achieved would not have been possible but for the achievements of some of the bigger, yet poor states. He urged industrialists to invest more heavily in the 300 districts of the country that were industrially barren, so India could achieve its full potential. 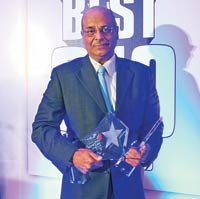 CFO No. 1: Tata Motors's CFO C. Ramakrishnan, who won the awards for Exemplary All Round Performance and Best Transformation Agent (Large Companies)
India Today Group Editor-in-Chief Aroon Purie said India's CFOs were doing an exceedingly good job of steering their companies through rough waters. YES Bank Founder, MD and CEO Rana Kapoor said CFOs were required to act as the checks and balances of CEOs. Business Today Editor Chaitanya Kalbag briefed the audience about the rigorous methodology followed while choosing the best CFOs. In the first round of sifting, the financial performance of companies on the BT 500 list for the last three years was considered. The financials were then analysed closely by BT's knowledge partner YES Bank. The second round comprised a perception survey of brokers and analysts by Ipsos India. In the third and final round, a distinguished panel of experts chose the winners after much discussion. There were 14 categories of awards. The prize for the best overall CFO went to C. Ramakrishnan of Tata Motors. (See www.businesstoday. com/cfo-winner for his achievements.) "It is a nice feeling; a humbling experience," he said. Like many of his peers, he, too, credited his team entirely, "I am here only to collect the trophy on behalf of the company and my team," he added.

The rapt audience at the Best CFO Awards ceremony at ITC Maurya, New Delhi
Ramesh Swaminathan, President Finance and Planning, Lupin, said the BT-YES Bank Awards were much valued by the CFO fraternity. Amit B. Jain, CFO of Zydus Wellness - at 31, one of the youngest CFOs - said while CFOs may have differences with their CEOs, the latter appreciated their efforts to keep the company's health sound. Many said the awards had inspired them to work harder and return for an encore next year. India Today Group CEO Ashish Bagga proposed the vote of thanks. The research partner for the event was Ipsos India and event partner was Black Dog.

Teeing off in Dubai