They didn't just dream, they also succeeded in living their dreams. India's most powerful business women have fended challenges, both personal and professional, to reach the top of the ladder - and they don't plan to stop at that. More than 30 business women gathered at Mumbai's ITC Grand Central last fortnight where they were felicitated as Business Today's The Most Powerful Women in Indian Business.

Xerox Corp Chairman and CEO Ursula Burns was the chief guest, and the occasion was one to remember. Having worked with Xerox all her life, Burns, in a lively discussion onstage with Business Today's Editor Chaitanya Kalbag, said her company had never expected her to change herself in any way for the sake of her work, but simply do it well. "People actually pointed me towards roles and I was smart enough, humble enough, or lucky enough to not push back."

However, Burns, who is a mechanical engineer, feels women are sorely under-represented in many sectors. Renu Sud Karnad, Managing Director of HDFC, echoed the same sentiment while engaging in a panel discussion on whether successful women leaders have made it easier for other women to succeed. She said many industries such as manufacturing still employ fewer women. 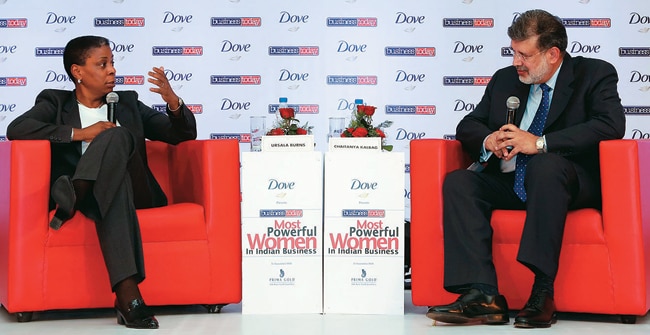 Ursula Burns (left), Chairman & CEO, Xerox Corp; with Chaitanya Kalbag, Editor, Business Today
The discussion moved to the importance of impatience in business. "One should be impatient with the steps one takes, but be patient about the outcome," said Naina Lal Kidwai, Country Head, HSBC India. "Be patient with failure and take it as a learning curve. And that's where women can score."

(From left) Kathryn Mikells, CFO, Xerox Corporation; Shikha Sharma, MD & CEO, Axis Bank; Zia Mody, Managing Partner, AZB & Partners; Naina Lal Kidwai, Country Head, HSBC India; and Kalli Purie, Group Synergy & Creative Officer, India Today Group
The general observation was that things are changing, but that change is slow. "It is important to look at small steps," said Shikha Sharma, Managing Director & CEO, Axis Bank.Sharma said that one needs to be patient in today's economic environment. On the other hand, Zia Mody, Managing Partner, AZB & Partners, said: "We have been patient enough. Now is the time to be completely impatient." She struck a humorous note when she commented on the change from "wait a minute" to "wait a second" and said someday we will say "wait a nano second".

Sixteen of the 30 women figured in the list for the first time. Three women, who have made this list at least seven times, moved into the hallowed "Hall of Fame". They were Britannia's Bali; Renuka Ramnath, MD & CEO, Multiples Alternate Asset Management; and Karnad of HDFC. "I would consider my work done if I could even inspire a handful of women," Karnad said.

How IT hub Bangalore's slipping halo can be restored