N.R. Narayana Murthy, Executive Chairman of Infosys, India's third-largest IT company, was the opening speaker at Business Today's two-day MindRush conclave. Murthy, who earlier this year came out of retirement to try and arrest the sliding fortunes of th 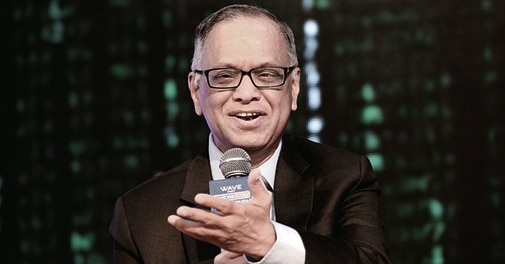 "It was not I who wanted to go back to Infosys. I was invited. It was all under special conditions" Photo: Shekhar Ghosh

Three times that evening, N. R. Narayana Murthy talked of the irresistible rise of TCS, causing its CEO N. Chandrasekaran, who was sitting in the audience, to break into a smile that was at once shy and proud. Murthy also spoke at length about his return to Infosys as its Executive Chairman, about bringing his son Rohan into the company, and about Infosys' settlement with the United States government over the issue of Form I-9. But, above all, he spoke about courage, values and respect.

If you were present at the opening session of Business Today MindRush on December 13, you would have been witness to vintage Murthy: generous, extolling principles, and forthright yet guarded (he refused to discuss the Business Today story that foresaw his return).

Speaking on "Lessons from my life in business", he said there was no leadership without courage: courage to do what is right, to admit one's mistakes, to accept that peers can be smarter and better, and to take tough and unpleasant decisions. As the evening progressed, he showed glimpses of all these, the nod to TCS being just one of them.

He said he had lost lots of sleep since the day of Infosys' settlement with the US government. "The organisation's only fault was a technicality, not ensuring that our employees completed the I-9 forms correctly."

Form I-9 is used to verify the identity and employment authorisation of individuals hired for employment in the US. Infosys agreed in October to pay $34 million to the US government for the errors.

"There was no violation of any US rules regarding visa usage. But, even a light rap on the knuckles for India's most respected company is not something I expected would ever happen… I say, on behalf of the management of Infosys, that we own full responsibility for this technical lapse, that every Infoscion shows a sense of contrition, and that we promise to do everything necessary to avoid being in such a situation again."

It is important to ensure that, because for Murthy, respect from every stakeholder -- customers, employees, investors, vendor-partners, the government of the land, and society - matters more than revenues, profits and stock price. 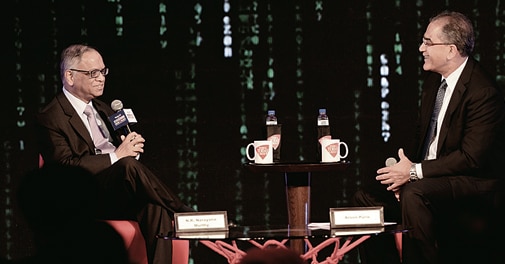 Editor-in-Chief, India Today Group, Aroon Purie (right) with N.R. Narayana Murthy, Executive Chairman, Infosys, at BT's MindRush
That may have been the reason he took pains to explain to the gathering of businessmen, CEOs, luminaries from society, and journalists why he is running Infosys again.

"My coming back was at the request of the board. Not even in my wildest imagination did I think of that possibility when I walked out on Aug 20, 2011."

Naturally, he was reluctant to come back. He had spent 30 years nursing Infosys and was looking forward to spending time with his family, enjoying the simple pleasures of life.

But the board of directors and the executive council wouldn't give up. They spent more than a month talking to Murthy. "They said Infosys is your middle child. My daughter was born in 1980, Infosys was co-founded in 1981, and my son Rohan was born in 1983.  They said if one of your children needs your attention, would you not go?"

He went. He also took along the third child.

"I told the directors I wanted to spend time with my children. Then they said let's find a way where you can spend time with your children as well. That's when I started thinking."

On a number of occasions in the past, Murthy had said that none of the founders' children would work at Infosys. So when his own son came in, even if only as his executive assistant, tongues began to wag.

But Murthy's mind is free of doubt. Corporate governance, he said, was about ensuring that no one derived underserved benefits. Rohan, he believes, is deserving and draws no benefit. He is a PhD in computer science and a Junior Fellow in the Society of Fellows at Harvard. His research interests include networked systems, embedded computing, and distributed computing systems. He was a Computing Innovations Fellow at MIT.

"On the issue of meritocracy, there is nobody of that accomplishment in Infosys. That's the reality. Second, he will take one rupee as salary.
I don't see any issue of violation of ethics. And it was not I who wanted to go back to Infosys. I was invited. It was all under special conditions," Murthy said.

Of course, much of the chatter could subside very quickly if Murthy were to put Infosys back on track soon. The company has grown slower than its peers in the last two years and lost the number two slot to Cognizant.

However, if Murthy were to restore Infosys to its bellwether status, do not expect him to break into a cry of cheer and a hoop. As he said that evening, business, as life, has ups and downs. "That is why we, in South India, eat a mixture of sweet jaggery and bitter neem with a smile on Ugadi (the New Year day), just to show that we will take the good and the bad during the ensuing year with equanimity."