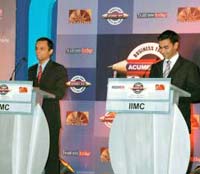 Acumen 2007 Debate winners
When the best minds from B-schools rattle sabres and engage in verbal and mental combat, expect the following— statistics, hyperbole, decibel level records and above all indefatigable enthusiasm. The Business Today-Aditya Birla Group Acumen 2007 National Finals had all the above and more.

On a lazy Saturday afternoon (strictly outside the venue, of course), students across colleges in Mumbai trooped into the ballroom of one of the city’s leading hotels to witness the orators and quizzers from the country’s Bschools lock horns in a battle of wits and intellect.

The day kicked off with the first semifinal of the national-level debate with the topic: “India’s demographic dividend is nothing but marketing hype.” Speaking for the motion were defending champions, Arka Bhattacharya and Anchal Gupta from the Indian Institute of Foreign Trade (IIFT), Delhi. 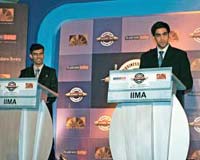 Acumen 2007 Debate runners-up
Challenging the motion were Vinamra Srivastava and Mohit Sadani from IIM Ahmedabad. As Moderator of the debate and host of the event Harsha Bhogle put it: “It’s rarely that IIM-A finds itself in a position of being challengers.”

Once the floor was opened for debate, the stats flowed—from the contribution of women to GDP, to the abysmal education levels in the country to unemployment and underemployment levels. That seemed to be the tack of IIFT—hit ’em with the numbers hard till their heads reel.

But then for every statistic, there is another counter-statistic. Moreover, they were up against IIM Ahmedabad. These guys, when they pass out, become investment bankers and chief financial officers— numbers are what they live and die by.

Some more numbers were thrown at a by-now-dazed audience. Finally, it was logic and smart lines like “when handed lemons, make lemonade. When we have a demographic dividend, let us make use of it” that saw IIMA pip the defending champions to make it to the final round.

The second semifinal was perhaps among the most engrossing events of the day. Like most of the fiercest battles in history, this one, too, was fought over—women. Now, before you start cooking up images of the contestants slugging it out for the pretty master of ceremonies, here’s the topic of the debate—“India Inc. is not doing enough to groom women leaders.”

The team for the motion— IIM Calcutta—started off with, guess what, some statistics. “Out of the 278 directors on the BSE Sensex companies, there are only 10 women…even China fares better,” said Arzi Adbi, of IIM-C making an impassioned appeal to India Inc. to get more women into the boardrooms. “Bring in flexi-timing, extend maternal leaves, start crèches.” Most males in the audience nodded their heads as the idea of having more women colleagues around them seemed to appeal one and all.

“Gender has nothing to do with leadership,” countered IIM Bangalore’s Sahil Barua and Sandeep Das. “Anyhow, IT companies in Bangalore are doing what you talked about right now (building crèches and the ilk) for the last five years. In the next 20 years, you will see more women directors in the boardrooms.”

Harsha Bhogle had an interesting tonguein-cheek take on the whole debate. “Ban every soap on TV….to think that these are made by a woman,” he said, to a generous round of applause from the audience. The runners-up team in quiz
After everybody grabbed a spot of lunch, the show resumed with the B-school Alumni Quiz. Questions like “From which source does the Chinese recording industry get half of its income?” were answered in a jiffy. If you are still scratching your head like I was, here’s the answer—“Ringtones”.

But the question of the day was, “What did Lawrence Sperry, the founding member of the mile-high club (an esoteric club of individuals who have enjoyed sex on an airborne aircraft) invent?” The answer, rather a logical one in hindsight, was answered by Jayashree Mohanka, an alumnus of IIM Calcutta, and currently employed with Eveready. Mohanka and her partner Rabi Sankar Saha, an employee with BPCL and alumnus of the Delhi School of Economics, went on to win the Alumni Quiz, rather comfortably.

It was time for the finals of the debate. A cracker of a topic— “India Inc’s business leaders should take over the political leadership”— ensured that a final debate worth the occasion would happen.

Speaking for the motion, IIM-A’s Sadani set the tone with this observation: “Look at the business headlines instead of the political headlines and you will see the difference. Our Civil Aviation Minister, Praful Patel, is a great example of a successful businessman-turned-politician.”

IIM-C hit back quoting Infosys founder N.R. Narayana Murthy who had said that managing a company with homogenous set of people was easier than politics, where interests are diverse and issues more complex. “Take the case of Dr Vijay Mallya,” said IIM-C’s Adbi, “He is no stranger to the Cauvery issue. But he cannot talk about it openly despite being a representative from Karnataka without endangering his business interests in another state. There is a serious conflict of interest.” After some hardcore grilling by the judges—BNP Paribas COO Praveen Chakravarty, Aditya Birla Retail CEO Sumant Sinha, and Business Today Managing Editor R. Sridharan—IIM-C was declared the winners.

As Bhogle popped question after question, the answers flowed and pulses raced. Questions like which filmmaker does not like to use brand names in his movies and invents names, or which place has a turnover of over Rs 200 crore, is spread over 223 hectares and has an economy which makes leather goods, pottery, handicrafts etc? The answers—Quentin Tarantino and Dharavi. By the third round, IMT Ghaziabad, was cruising towards a win.

But a couple of incredible winning answers by NMIMS set up a befitting finale. A last ball thriller, like Bhogle would have commented on television. A final rally by NMIMS’ Souvik Basu and Govind Grewal made them all-India champions defeating IMT’s Siddharth Mukund and Harkirat Singh by a mere 5 points.

Perhaps seeing the fierce levels of competition, Aditya Birla Group’s CEO Sumant Sinha in his speech remarked: “Seeing the quality of people, I am glad that I finished my MBA when I did. The quality of the debate was just stupendous.”

The icing on the cake, especially for the female species in the gathering, was the Chief Guest, none other than Bollywood heartthrob, John Abraham. “Intelligence shows and these gentlemen on the stage just proved it…seeing all this made me feel very young,” he said as he distributed prizes to the winners.