The Business Today-DuPont Sustainability Forum brainstorms some of the key issues and challenges involved in efforts to steer farming away from unsustainable practices and its consequences.

I's a Friday evening in Hyderabad, and an urbane set of people has gathered in the Kohinoor Hall at Taj Deccan. A distinguished-looking person in a churidar-kurta in their midst catches your eye, making you wonder who he is and why he has chosen to make such an appearance. But as the initial din subsides, the gathered people take their seats and a serious discussion ensues, the person's attire strikes you as just appropriate for the occasion-a panel discussion on "Smart Farming-The Promise and the Problems" organised by the Business Today-DuPont Sustainability Forum, the second in the series that kicked off in Delhi recently with a panel discussion on sustainability in an uncertain world.

Balvinder Singh Kalsi, President and CEO, DuPont India, the sponsor of the event, speaking of DuPont's own experience in sustainability through the decades, said: "In the '70s and '80s, we focussed on internal safety-on meeting the environmental and regulatory requirements. And as we moved into the late '80s and early '90s, we brought in voluntary footprint reduction and during this time, focussed on increasing shareholder value with a goal of zero safety and environmental incidents." According to him, the sustainability discourse today has expanded to include human safety as well as environmental protection, and while the focus on sustainability will continue, the pace will hasten or quicken now.

Irreversible trends
Some of the trends, Kalsi said, are irreversible because the common denominator of all is the exploding world population, which was increasingly putting pressure on all kinds of resources-land, water and fossil fuels. Science, according to him, provides a solution-be it traditional sciences like physics and chemistry or newer ones like biotechnology or nanotechnology. "But for science to really work, it has to be first accepted, learnt and practised. What is also important in the current environment is the dimension of thinking with time compression in mind. If it was days, weeks and years earlier, it has to be seconds, minutes or hours today," he said.

In response to a question by Mitra on whether there is an obvious need for a paradigm shift in the approach to agriculture, DuPont's Niebur, who himself grew up on a Texas ranch, said: "We are in a very different and very dynamic period today."

According to him, people started off in the 1990s thinking that biotechnology would be one way to raise agricultural productivity in a more sustainable manner, as it would protect the environment and reduce the amount of inputs that would be used. However, the debate on the usefulness of biotechnology has now been replaced by the question: "How do we responsibly and sustainably use every technology and every tool that we have in our plant breeding toolbox to drive greater productivity in a sustainable manner, and to meet the demands that the world has placed on agriculture?" 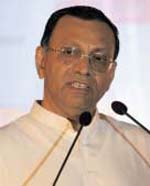 K.S. Raju
Niebur talked of a virtual acre or a virtual hectare with a clear focus on working towards doubling or tripling productivity of that specified parcel of land with intelligent use of the same amount of inputs, energy and environmental impact without having the need to bring in additional land into production. What is important, according to him, is the ability to deliver high quality seeds to every farmer and grower and combining that with the right inputs that respect and increase productivity in a way that allows that seed to realise its full genetic potential. But it's not just science or research that can make a difference. The corporate world, too, can contribute to sustainability. ITC is a good example of this. In this connection, Rao of ITC pointed out how the company's paperboard division has been able to improve the lot of some 75,000 farmers and how it has become self-sufficient in its own input requirements and is not dependent on any forests for pulp. "When you talk of sustainable management of agricultural resources, you cannot forget that its backbone is the farmer," he said 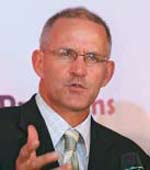 William S. Niebur
A bigger danger
Ajay Parida of the M.S. Swaminathan Research Foundation drew attention towards a bigger danger facing agriculture today. He said very few people are looking to farming as an option for livelihood and sustenance.

"Global estimates suggest that by 2020, we will have about 400 million people going out of farming," he pointed out. And that is not all. According to him, farm income is not sustainable today. Doing a back of the envelope calculation, he added: "For a farmer who is cultivating rice on one hectare of land, at the current minimum support prices, he gets about Rs 20,000 to Rs 30,000 per hectare. If one were to deduct the inputs costs that he incurs, then the farmer is left with barely Rs 4,000-5,000. This for an average family of 5-6 members is not sustainable." 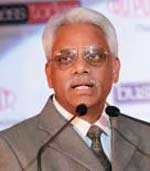 S.N. Rao
Parida said his single-point agenda or single-point recommendation would be to ensure that youth is attracted and retained in agriculture. "That is the smartest way to achieve sustainability and productivity." According to him, the Indian farming sector is facing several issues; it has to deal with technology fatigue and there is need to look at newer technologies like biotechnology and nanotechnology; then, there is yield fatigue and there is a need to provide support to the farmer in terms of various support systems that can deal with soil health, conservation of water and yield; there is also policy fatigue as there are situations where mere changes in minimum support prices become politically sensitive issues. He sought to make the point that technology and science make only one component of sustainability, and this has to go hand in hand with public policy. As he said, "We can develop a smart seed but the farmer needs other support systems, too." 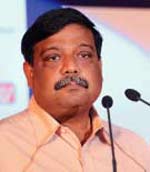 Ajay Parida
Contribution of R&D
But for someone like Raju of Nagarjuna who, after the event, described his attire as that of a "smart farmer", the current pace of growth is unsustainable and "someday it will all end". The intention, naturally, will be to stretch that closing time. He does not expect governments to play an active role in empowering the farmers. Giving example of how Nagarjuna Fertilisers had engaged with farmers, he said the corporate sector needs to work with the farmers, should not look at today's gains at the expense of tomorrow and should try and resolve the conflict of interest between industry and the farmer. As for the contribution of research and technology, he felt that fundamental research was needed to stretch the life of plant nutrients and make farming more sustainable.

Little wonder, DuPont's Niebur felt that in today's dynamic world, it is absolutely critical to think in terms of the ecosystem in which one operates. According to him, farming is no longer a hobby or a pastime. It is serious business. That is why, in order to attract the best talent to farming, it is important that it gets treated by all as a business that has a high premium on it. Increasing food security is the surest way to also drive greater political security and ultimately greater economic growth.
TweetYoutube

How the west was won