A simple walk through its lovely grounds can be a delightful experience in itself. The 112-year-old Tollygunge Club in the heart of metropolitan Kolkata is as much a place of great natural beauty with its flowering tress, tropical plants and fauna as it is a relic of history. Whether it’s the 200-year-old Club House or the idyllic 18-hole golf course, Tolly, as it is popularly known, is strewn with legends, anecdotes and memories of all sorts about India’s colonial past.

On a mid-December morning, amid the twitter of birds and the early rays of the sun filtering through the foliage of age-old tropical trees and falling over the velvety expanse in an inclined shower of lights, 80 golfers sat at the Club House over a sumptuous breakfast discussing their strategies ahead of the start of the Business Today-Honda Pro-Am of Champions 2008 at 8 a.m. A little away from them and shaded by tall trees stood a spanking new Honda CRV, there for the taking by anyone who was good enough to score a hole-in-one. 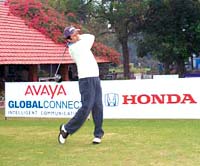 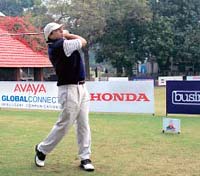 A.K. Sareen in full swing
The 18-hole, 71-par Tollygunge golf course, spread over 100 acres and designed by world renowned golf architects, is one of the few allseason courses in the country, and, therefore, a favourite grooming ground for professional and amateur golfers. It caters to different skill levels. Naturally, the club is an ideal venue for the Business Today-Honda Pro-Am Championship, the only stand alone Pro-Am golfing event recognised by the PGAI and participated by the top echelon of the city’s companies, professionals and administrators.

By the end of the day, only a few were able to translate their hopes into reality. But all the golfers looked disappointed as the stunning Honda CRV had eluded them: no one could get a holein-one on the 13th. But that disappointment was certainly overshadowed by the feeling of having enjoyed a fun-filled day. The Business Today-Honda Pro-Am of Champions 2008 was played on the accepted Stableford format and it had three distinct handicap categories of 0-8, 9-16, 17-24. Each player was allowed 75 per cent of his handicap. Running concurrently was a team event with sides randomly chosen by the computer. K.N. Desai in action
The trio of Aditya Khaitan, Sanjeev Nagar and Kiran Desai booked a berth in the national finals of the 13th edition of the BT-Honda Pro-Am of Champions. The three emerged victorious in their respective handicap categories to reach the final. While Khaitan was the winner in the 0-8 category, Nagar beat the field in the 9-16 category, and Desai won the 17-24 category. Incidentally, all the three logged an identical score of 37 Stableford points.

The quartet of Ravi Shankar Kataruka, Vicky Kapoor, Kiran Desai and L.K. Jhalaria emerged as the champion team with 97 Stableford points. They beat Harmeet Sahney, Madhav Adige, J.P. Sarkar and Mahesh Khattry, who finished as the runners-up with 92 points. Deepak Tandon's fine stroke
“It’s not that a few individuals have won. The purpose of the game has won and each of us enjoyed it to the hilt,” said one of the golfers, summing up the mood. There were many who didn’t play but had joined others to cool their heels over the weekend lunch at the sprawling Tolly Club. The grand finals of the four-leg event will be held in Delhi in the third week of February. The respective winners from each of the four zones will travel to the national capital where they will get a chance to rub shoulders with the best professionals in the country.

The winning team
Apart from the main trophies, there were other interesting prizes on four holes, which tested the golfers in all departments of the game. The tournament was sponsored by Honda Siel Cars India and co-sponsored by Avaya Global Connect and ITC Hotels. ColorPlus was the styling partner.

As L.K. Jhalaria says: “The beauty of golf is that you tee off as just another golfer or an acquaintance and by the time you reach the last hole, you are very good friends.”

The participants left with not just a one-of-a-kind golfing experience but also as good friends some of whom may have forged some business associations as well.