Signal green but no engine

India’s shift to renewable energy could stall in the absence of clearer policies. 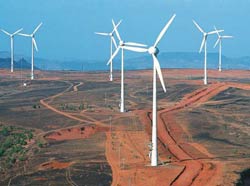 Renewables
Waterworld! that’s what global warming could turn the Earth into, 500 years down the line, as portrayed in the 1995 Kevin Costner movie. But the danger could be far closer. According to the latest scientific projections, India’s eastern and western coasts could be under water by 2050 or earlier. With the polar ice-cap meltdown certain to be a big event, India has to move faster to adopt alternative or renewable sources of energy and reduce burning of fossil fuels, the prime cause of global warming.

The trouble is, making use of alternative energy sources like the sun, biofuels, wind and fuel cells is a costly business to begin with, as technologies have to be developed and the government has to lay out the policy framework to encourage the costly switchover.

On the flip side, for India, global warming is not the only compulsion for seeking out alternative energy sources, as Siddhartha Das, General Partner, Ventureast Fund, points out. Large swathes of its interiors are still not connected to the traditional power grid.

The government has taken some initiatives across a wide front. For one, it has set 2017 as the date by which diesel has to be sold with a 20 per cent component of bio-diesels from nonedible oils. A National Biofuel Coordination Committee to be chaired by the Prime Minister is also being set up. Then, there will be a Biofuel Steering Committee under the Cabinet Secretary.

S.P. Gon Chaudhuri, a technocrat who pioneered implementation of alternative energy uses and policies during his stint at West Bengal’s power department, says India is on the right track—the Prime Minister has announced a Climate Action Plan with emphasis on a solar mission, and the government today has a separate ministry to deal with the issue. “Then, while the government has a biofuels policy, it is believed to be planning a similar one for renewable energy. If that happens, it will be very important for the sector,” he says.

Missing traction
But industry says that without a powerful policy engine, the alternative energy market will continue to be nascent. Although, in windturbine energy, India is ranked among the Top 5, segments like solar energy are far from a mass rollout and are more common as captive use.

The India Semiconductor Association, in its first comprehensive report on the solar photovoltaic (PV) cell industry, says the industry lacks adequate investments in the manufacturing of solar PV cells and research & development. According to the Association, the sector has around 90 companies. During the year to March 31, 2007, India produced nearly 45 MW of solar cells and 80 MW of solar PV modules— and exported 60 MW of solar PV products, presumably because of the absence of buyers at home.

Lack of buyers in a country drenched in sunlight? “The country is blessed by being geographically in the latitudes where the sun shines for 250 to 300 days of the year. That is 5,000 trillion kilowatt hours of radiation for India,” says Homi C. Bhedwar, Director, DuPont Knowledge Center. But India today meets only 0.2 per cent of its energy needs from sunlight.

That could be because of the cost of solar panels. Chaudhuri points out that monocrystalline black-top cells today give 20 per cent efficiency, the highest, and the cost is $3.7 (Rs 182) per watt. What is important is that costs have been coming down. “In 1975-76, the cost of solar cell was $100 per watt and today it is down to $3.7 per watt,” he says.

Private players are betting big on the potential. For example, Moser Baer, a significant player in the solar PV industry, is now ramping up its core R&D and high-tech manufacturing competencies and aiming for a global presence. Moser Baer’s Chairman & Managing Director, Deepak Puri, says: “The overall objective is to bring down PV electricity costs to match conventional energy price points... We have already announced an investment of $3.6 billion (about Rs 17,280 crore) in the solar photovoltaic business.” 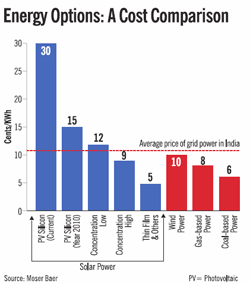 It has already invested Rs 5,880 crore and expects to put in the rest by 2010. Moser Baer, which sees solar PV as the vital link in tackling the energy crisis, has spun off the business into a subsidiary that is present in the entire value chain from manufacture of cells and modules to multiple PV technologies.

But solar power for the grid is some way off. “The feed-in tariffs in India are still low and need to be competitive with the developed markets to encourage more investment in solar energy in India,” says Das of Ventureast Fund.

As for biofuels, A.K. Varshney, Director (Planning & Coordination), Ministry of New and Renewable Energy, (MNRE), says: “In biofuels, which include biodiesel and bio-ethanol, the country has a ray of hope in providing energy security.”

To achieve the 2017 target of having a 20 per cent blend of bio-diesel, India will need 16.72 million tonne of bio-diesel. To produce this, the area under various bio-diesel plantations would have to be around 35 million acres, assuming a yield of 1.6 tonne per acre and oil recovery at 30 per cent, says C.S. Jadhav, Director, Marketing, Nandan Biomatrix. “A lot of effort is required from government departments, financial institutions and entrepreneurs,” he adds.

According to Varshney, the government is doing its bit on the policy front, calling for mandatory use of ethanol-blended petrol. In bio-diesel, the government’s focus is on encouraging only nonedible oils from plants such as Jatropha and Pongamia. Varshney admits that the bio-diesel industry is at a nascent stage, although some states have already put a total of 645,000 hectares under Jatropha and Pongamia.

Action agenda
Chaudhuri, who’s also a recipient of the Green Oscar from the UK in 2004 and now Managing Director, West Bengal Green Energy Corporation, says the government must do three things.

“First, the states must clearly announce plans to reduce emissions and set a target in terms of how much and by when. That is internationally called Renewable Energy Portfolio Standard (RPS),” he says.

Secondly, “the actual pricing of thermal power should be considered by the regulator, because today, the cost of electricity from thermal power plants is highly subsidised in a hidden manner,” he says, adding that utilities do not, for instance, take into account costs associated with rehabilitation, mining and environment. “This should be indicated clearly and only then will renewable energy appear clearly attractive.”

Homi C. Bhedwar
Third, “the government should think in a holistic manner and should keep in mind that while nuclear energy is clean power, its contribution is only 4 per cent in terms of meeting the total energy needs as compared to nine per cent by renewable energy.”

Adds Ventureast’s Das: “The government must increase feed-in tariffs and extend the period of such incentives, mandate that utilities and grid companies purchase a certain percentage of renewable energy, and stimulate demand for solar energy by offering tax incentives to companies.”

S. P. Gon Chaudhuri
Poornima Shenoy, President, India Semiconductor Association (ISA), makes an important point: the government has to modify the generation-based incentive (GBI) both in terms of the size covered and the period.

“Now, GBI is applicable only up to a total of 50 MW through grid interactive solar-based power generation in the country... this must be extended to all project developers for an unlimited capacity over the next five years to encourage large projects,” she says. Also, the incentives should be extended for 20 years against 10 years now.

Deepak Puri
On the research front, intensive work is being done by government labs like the Defence Research & Development Organisation, the Council for Scientific & Industrial Research and others to develop elite varieties of Jatropha as well as better technologies for oil extraction, bio-diesel production and use of by-products of bio-diesel.

But work needs to be done on the question of a minimum support price for non-edible oil seeds, a minimum purchase price for bio-diesel and fuel ethanol, availability of wastelands and state policies for allocation of wastelands, financing of biodiesel projects and development of standards.