"The opportunity is huge, but there is no incentive"

A Business Today-Technopak roundtable on ‘Opportunities and Investments in the Healthcare Industry’ throws up some ground-breaking solutions on how to help the sector thrive.

Healthcare has been touted as the ‘Next Big Thing’ for some time now. However, it somehow hasn’t yet become that, thanks largely to a combination of archaic laws, inadequate regulation, opaque balance sheets and the reluctance of the government to give healthcare industry and infrastructure status. 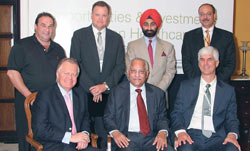 BT: Infrastructure-creation is pretty much the flavour of the season today in India. However, when it comes to building hospitals, which one would assume is also infrastructure, there’s not much to be heard on that front.

Dr Prathap C. Reddy
Reddy: I am glad you mentioned that healthcare is an infrastructure sector. But the truth is nobody has classified us as any sector. We’ve been told that hospitals cannot be classified as an industry. We’ve asked for infrastructure status at one point, and at another point we said at least call it a priority sector. Unfortunately we got neither. But if one has to build a healthcare organisation we need this. We know there is a great dearth of healthcare facilities in the country. But there is no incentive for people to get into this business, where the opportunity is huge. The government knows the statistics, in terms of number of beds, insurance and human health resources— they’re all woefully inadequate. We’ve asked for a certain amount of regulatory changes—for instance, as has been suggested, human resources in healthcare could be privatised to quickly catch up with the needs of the country. We’ve never had the attention of the government for the past 20 years.

BT: What should the government be doing to make private healthcare more attractive for investors?

Michael Neeb
Neeb: The purpose of my trip is to re-acquaint ourselves with the Indian market and understand it. Dr Reddy has already touched upon one of the best ways of getting outside investment, which is basically government support. One of the best ways to scale up very quickly on the private hospitals side—as some countries have done in the past—is for governments to give tax incentives.

You need tax incentives to build hospitals, you need tax incentives to ensure people take up insurance, you need tax incentives in support of medical research so that you can continue to train staff and have a world-class research centre in India. I think it’s possible to do all this very quickly; it’s probably the worst example (because its population is a fraction of that of India), but if you look at Ireland—a country that we looked at investing in for a while—it took a decision five-six years ago that the government hospital system was overstretched. So, it passed very strong legislations to provide tax incentives. As a result they’ve been able to more than double the capacity of private hospitals within the last four-five years.

Dr. Jack Shevel
Shevel: I think India offers enormous opportunities in terms of investment. Demand obviously far exceeds supply, it’s a market that is evolving and there are a lot of favourable factors for potential investors— for instance, the market here is not that regulated, investments can come in relatively easy, and remitting profits is easier (than in many other countries), and politically this country is pretty stable. In terms of specific opportunities, I think every sector within healthcare—be it hospitals, diagnostics, or radio therapy—has tremendous potential. One does want to start seeing profitability and returns coming out of the existing groups, and in time that will happen once infrastructure is created. This is a sector for mediumand long-term investors. It’s not a short-term game. Valuations today in India are fair, appealing and attractive. India is undoubtedly one of the greatest healthcare growth stories worldwide.

BT: India is touted to be well-placed to ride a boom in medical tourism. But is it only about being low cost? Mr Schroeder could perhaps throw some light on this via his and his hospital’s experience in Thailand.

Curtis J. Schroeder
Schroeder: It is more a cost and value proposition. Nobody wants cheap healthcare; people want good healthcare at a reasonable cost—and there’s a significant difference between the two. I think India is extremely well positioned to provide that, as well as positioned as a good investment site for domestic development. All the elements are here in India in terms of obvious demand, the growth of the middle class, which is one of the key indicators for success of the private industry. We’ve seen that regionally in Singapore, Malaysia, later in Thailand, and now in the Philippines, and in India. Contrary to popular belief, it is not the ‘wealthy’ sector that derives the main advantages of private healthcare. It’s a strong middle class that does that. We saw that in Thailand back in the late ’70s and the early ’80s. It was a solid GDP growth that drove a larger middle class that had more disposable income. And they very often choose to spend that disposable income on more convenient, high-value healthcare. I would also say that governments tend to play a significant role. If you look at some of the biggest changes in investment opportunities throughout Asia, they have been usually stimulated by significant changes in government policy which, as Dr Reddy said, may have not yet happened here. In Thailand, the biggest increase in hospital beds, of around 10,000 just in Bangkok, came shortly after a government initiative to allow the Board of Investment (of Thailand) to give certain tax advantages to private healthcare developers. That boom didn’t come just like that. It came because the government said: We won’t tax you for five years; or that we won’t tax your import of medical equipment.

Shivinder M. Singh
Singh: Today, we have about 45,000 hospitals in the private space. Only 6 per cent of these hospitals have over 100 beds. Some 84 per cent of these hospitals have below 30 beds —you really can’t call these hospitals. Therefore, quality, transparency, systems, procedures, back-office— that’s what the larger population wants today. Amalgamation and consolidation are going to happen. That’s happening along with another wave that started two years ago, and that will go on for many more years to come. And that is the keenness of many players to get into small & medium-sized hospitals— 100-150 beds. That’s great because it’s adding to infrastructure. They will align because they’re part of a new generation. They will work with networks to derive benefits.

Arvind K. Singhal
Singhal: If you look at a three-five year horizon, I anticipate a significant change in the scenario for healthcare. At this point we see a lot of interest; and from very significant investors, not only from India but also from overseas. Within India, we have started to write proposals that entail investments of $2 billion or more for greenfield facilities. In the very near term there are many constraints— how to make a balance sheet look presentable to an investor is one big challenge simply because regulations don’t allow you to make a decent return on investment. There are no tax incentives and other incentives to actually hold out for a certain number of years; on top of that, like everything else in India, the physical infrastructural costs become a huge limiting factor. Buying land (versus getting land allotted to you) in any major city itself makes the business unviable.

BT: Dr Reddy, the middle class is doubtless an attractive market for private healthcare. But should players like you also be focussing on the bottom of the pyramid, where the needs and the population are huge?
Reddy: I believe everybody needs healthcare. We can’t discriminate on the basis of where one is born, or whether one is poor or middleclass. But (to serve the poor) we need the government’s support. We’ve been asking the government to introduce the concept of universal insurance. One of the suggestions submitted by the Indian Health Care Federation to the government is the concept of Bharat Swasth, whereby a lower middleclass person could pay an X amount (for insurance). For example, 2 million farmers in Karnataka pay Rs 150 (as annual premium) for which they get care up to Rs 2-3 lakh. The police in Andhra Pradesh have introduced a similar scheme— one of the constable’s sons had a bone marrow transplant done that cost Rs 16 lakh. We need some basic coverage for such people. Today Andhra Pradesh has taken the lead via a scheme that will cover 50 million—which is about twothirds of the state’s population. But to ask a (private) hospital to do corporate social responsibility is not sustainable. I can do some amount of it, but it is not sustainable. The President of Sri Lanka invited me over and said: ‘Dr Reddy I want Apollo here.’ My reaction was: ‘How can I start Apollo here?’ The President then asked me: ‘What is it that you need, and what are the problems?’ At the end of the evening she said: ‘I will give you land (in the heart of the city), you pay for it in 25 years; you pay no taxes for the first five years; and you can have customs duty exemptions (on imported equipment).’ Today, we have six more hospitals in Sri Lanka. Similarly, in Dhaka the Prime Minister gave us permission to start our first hospital. Today there are 10 others that have come up because of the incentives that government has given. What such governments derive by giving incentives is much much greater (than the incentives they give). For example, it is proven that you can increase GDP (per capita) by 0.5 per cent by prolonging a person’s life for five years. According to me, if you develop hospitals and increase those employed in this sector, from 3.9 million to 30 million, you’re going to be contributing in a big way to GDP growth. Indirectly too we can employ another 30 million people. To be able to do this, we are asking the government not for donations but to alter some regulations.

Schroeder: Governments’ requests for free care are relatively unique to healthcare. You very seldom see them going to the shopping malls and saying: ‘Give people free rice because they need to eat.’ Nobody goes to proprietary house-building companies and tells them: 30 per cent of your houses need to be free. That would never be considered acceptable. Somehow in many countries— China, India, Laos, Cambodia, Vietnam—we have to deal with the same issue: That there must be some percentage given back. And that is only unique to healthcare. And I don’t see why. You don’t see any other necessities like food or shelter that are treated this way.

Singh: We’re looking at getting into the business of medical colleges. We did our research to find out how long it would take to break even given the current format of medical education. We took land as free, and a 30 per cent discount on the cheapest way we knew to build a building: It will still take us 12 years to get a payback. Singhal: The majority of our hospitals today are trust facilities. There should be a mechanism to convert them from a trust to a private, forprofit enterprise. That will at least make consolidation a bit easier. Singh: We need to kick-start (health) insurance—if you don’t get money in the hands of the people, they can’t spend it, it’s simple. Second is regulation. We want regulation because 99 per cent of the country’s hospitals need to be regulated. That’s because there’s no transparency, no clinical governance. So, we’re competing against a mirage. That’s tough to work against. Regulation will ensure that patients get healthcare according to what they pay. The whole country’s system is malpractised today— whether it is suppliers conjoined with the doctors, whether it is kickbacks between doctors for sending patients, or procedures not done but charged for—there is a whole bucket of issues.

BT Round Table: Biometrics is the future