India's corporate leaders called the shots along with the country's top pro golfers at the 14th Business Today-Honda Pro-Am of Champions 2009. 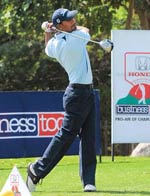 C Muniyappa topped the pros
As a leveller, golf makes no distinctions. And to those afflicted by an unyielding passion to improve at this hard and often frustrating game, the pursuit is nothing less than a microcosm of life. Fraught with pitfalls and setbacks but stacked on the promise of an elusive success, which, in the end, will make it well worth the effort. This unflinching optimism was in the air on a sunny weekend at the ITC Classic Golf Resort, Gurgaon, when the movers and shakers of India Inc. and the biggest names on the professional golf circuit teed it up in the Business Today-Honda Pro-Am of Champions 2009 National Finals.

For the 14th time in as many years, the only Pro-Am on the pro circuit came to town for two days of golf, business networking and mirth. Blame it on the economic slowdown or attribute it to the electric presence of a pro in every fourball-the focus was positively on the golf. Primed for the pros, the Classic Golf Resort presented slick greens and finely manicured fairways. "We've prepared the course for the pros and the greens are set up much faster than usual," said Ravi Puri, CEO, Classic Golf Resort. As if on cue, the pros shot low numbers on both days with the amateurs following suit. Inevitably, the economic meltdown was the only other topic doing the rounds besides golf. Ratan Jindal, Vice Chairman & MD, Jindal Stainless, was positive about the future. "Although the downturn is really bad all over the world, I don't think it will affect Indian golf to a large extent. We hope to see things improving in the next quarter." Not everyone was so optimistic.

Palmer Tompkinson, a commercial farmer from England, playing the tournament for the first time, remarked wryly: "I have as much faith in the revival of the British economy as I do in the revival of my golf swing!" Siddharth Shriram, Chairman, SIEL, spoke of better times ahead: "With so many young players taking to the game, golf is set for rapid growth in popularity and sponsorships in the future. Down the road, as the automotive business looks like improving substantially, Honda will consider building professional tournaments to leverage the brand." He was seconded by Tatsuya Natsume, Director, Marketing, Honda SIEL. "This is our third year of association with this tournament and it's a perfect platform for Honda to reach out to top corporates as well as pro golfers-both part of our target audience."

Not everyone had business on their mind, though, prompting Anil Mehra, Managing Director, India Today Group, to say: "Look around you, nobody is stressed, it's almost like there's no recession in golf!" Roy Cherian, CEO, Marketelligent, added: "It's such a delight to see the pros play. I'm here just to have fun on the course and may pick up some tips from the pros to help my game."

Registering a fine win
The BT-Pro-Am is a multi-city tourney and the National Finals in Delhi were preceded by regional rounds in Bengaluru, Mumbai and Kolkata. The tournament is played on a stableford format for the team competition and strokeplay for the professional golfers. For the purpose of scoring, 75 per cent of the original handicap of the amateur is taken into account. In the end it was the in-form Bengaluru lad C. Muniyappa, who scorched the course with a blazing four-under 68 on the second day to win the overall individual title with a tally of nine-under 135 over 36 holes to register a fine win. Masahiro Takedagawa, President & CEO, Honda-SIEL Cars India, poses with pros
Muniyappa made the most of his opening round of five-under 67, which also tied with Feroz Ali Mollah, Rahil Gangjee and Vijay Kumar for opening day honours in the individual category. Ashok Kumar blitzed the course with a nine-under 63 to claim individual honours on the second day. Meanwhile, in the team category, Vikrant Chopra led his team of Rajan Sehgal, Director, Arrival Travels; Gurkirat Khera, Chairman, Snowhite Apparels; and Rajender Atwal, Head-catering, Air India, to an emphatic win with a tally of 111 stableford points.

Ashok also made an additional Rs 55,000 for his second day's performance. Upen Roop Rai, Director, Indiatimes, stuck his iron pin high on the second hole to bag the "closest to the pin" award for the second year in a row, while Param Saikia, CEO, Publicis Modem, with 280 yards off the tee won the "Honda longest drive" on the eighth hole. Deepak Talwar hit the tiger-line to win the "straightest drive". In an unbroken streak of 14 years, the hole-in-one prize went unclaimed. A swanky Honda CRV was up for grabs on the fifth hole. Vipul Hoon, General Manager, Business Today, made an ace with his first shot of the day on Sunday on the second hole where there wasn't a prize for the feat.

Siddharth Shriram poses with the hole-in-one CRV
For those who played the BT-Pro-Am, the recession receded, at least for those two days. Any workrelated stress was shed like an old skin and everyone became a golfer first. Part of a level playing field where a good long thwack off the tee was enough to send the soul into a lilt. After the golf was over, the participants got together at a glitzy award dinner at the ITC Maurya in New Delhi, still exchanging notes and anecdotes from the weekend. A visibly pleased Aseem Kapoor, Publishing Director, Business Today, remarked: "

Our objective with this event is to promote the game and create a rich experience for the corporate world, both from a sporting point of view as well as business." The BT-Pro-Am is promoted by Business Today, part of The India Today Group, and Honda-SIEL Cars India Limited. ITC Welcomgroup donned the mantle of associate sponsors. South African Airways & Sun International (prize sponsors), UB Group (official liquor), Cleveland Golf (equipment partner), Ethos Summit (official time keeper & prize sponsor), Fitness First (official fitness partner) and Golf Digest India (official golf magazine) were also part of the event. The tournament was managed by Globosport.