The busiest executive in Adani Group's flagship business, Adani Ports and SEZ (APSEZ), is promoter Gautam Adani's elder son Karan. He is in constant travel mode, visiting the operational ports, looking out for new locations and talking to government representatives. The mission is to redesign and transform their traditional port business in India as a global business. Karan Adani, a management graduate from Purdue University in the US, was elevated from Executive Director to CEO of APSEZ in January and is trying to realise his father's plans.

Aggressive domestic and global expansion has been APSEZ's strategy for the past three to four years and it has helped Gautam Adani, Executive Chairman of the company, get the Business Today Best CEO - Transportation and Logistics award for this year.

The company's consolidated total income increased by 16 per cent to Rs 7,941 crore in 2015/16 from the year-ago period. EBITDA (operating income) surged by 19 per cent to Rs 4,651 crore - the first time it has crossed the $1-billion mark. Its profit went up by 24 per cent to Rs 2,867 crore. In the previous year, revenues and profits had risen by 24 per cent and 33 per cent, respectively, year-on-year. The company was consistently maintaining above 70 per cent EBITDA margins and 35 per cent PAT margins for the past three to four years. According to a report by brokerage firm Firstcall Research, the company will post over Rs 3,000 crore profits in 2016/17.

Gautam Adani also plans to develop more industrial clusters and full-service logistics with the goal of becoming a fully integrated logistics player of significant scale. Besides, he is aiming to build a 200 million metric tonnes (MMT) cargo business by 2020 from the current 152 MMT across all its ports in 2015/16, and to subsequently scale it up to 300 MMT. In comparison, the company was handling 90.71 MMT cargo in 2012/13.

Starting with the takeover of a single jetty at Mundra, in Gujarat, in 1994, APSEZ now operates 14 terminals across 10 ports in six Indian states with a capacity of 11 million TEU. Mundra is the largest with 2.77 million TEU. "We are India's first port-based SEZ and have a very unique model at Mundra compared to any other SEZ business. Our strategy has been very clear - to target only those companies in our SEZ whose survival in the market is purely on reducing logistics cost," says Karan Adani.

The company has two single-point mooring (SPM) facilities in Mundra to evacuate crude oil on the high seas. The Adanis are also building a new container terminal in Mundra in partnership with French shipping giant CMA Terminals and another in Tuticorin, in alliance with agri-infrastructure major National Collateral Management Services.

In May 2015, APSEZ bought Dhamra Port Company in Orissa from Tata Steel for an enterprise value of Rs 5,500 crore. "We anticipate Dhamra to have 35 berths with 315 million-tonne capacity. This will make it the largest port in India that has an industrial cluster. "We have added a massive 15-million-tonne berth, and as a result, our cargo handling has increased by 52 per cent last year and, by March, we are adding another berth, which will translate into adding 50 million tonnes in three years," says Karan Adani. 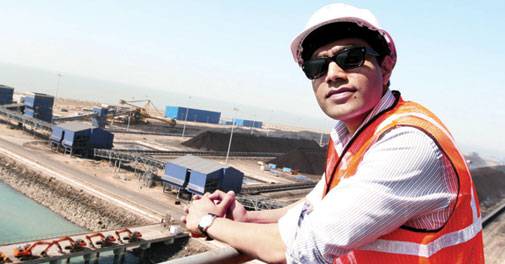 The company is building a port at Vizhinjam in Kerala at a cost of Rs 7,525-crore. The 3.5 million TEU port is expected to be commissioned by 2020. It is expandable to 4.3 million TEU and allows for a draft (the maximum a ship can sink into the water on loading) of 18.5 metres. Karan wants Vizhinjam to cut India's dependence on facilities in Colombo and Singapore, which handle majority of trans shipment of Indian containers, apart from Jebel Ali. "We are looking to compete with Colombo purely on operational efficiency and on cost. Today, in Vizhinjam, we have the flexibility to charge rates that will be as competitive as the Colombo port." They are also planning to have trans-shipment terminals in South East Asia, especially in Myanmar and Bangladesh, and also in East Africa to feed the upcoming Vizhinjam facility.

The Indian government's plan to build a port of similar capacity at Colachel in Tamil Nadu, 50 km from Vizhinjam, does not, however, bother the Adanis.

The other plan is to tap the inland cargo movement. APSEZ has created two million tonnes of coal movement capacity through National Waterway 5 (NW-5). The company is also investing Rs 5,200 crore for a five-million-tonne LNG terminal, and another Rs 2,300 crore for an LPG terminal of 2.5 million tonnes at Dhamra. "Given Dhamra Port's strategic location, this will be a game changer for transportation of coal across Brahmani River from Talcher to Dhamra and, consequently, this will allow coastal movement of coal along the entire Indian coastline," says Karan.

Overseas expansions are also on a war-footing. In September, it acquired Austra-lian firm APB, which operates and maintains Abbot Point Coal Terminal in Queensland, having a pay contract for 50 million tonnes per annum (MTPA) cargo, for Rs 100 crore.

The medium- to long-term focus is to have a presence in Maharashtra, Karnataka and Andhra Pradesh, so that the 10 existing ports are better served. "We plan to achieve this through a multi-pronged strategy by not compromising with the profitability of the business. We also want to enhance our asset utilisation through technology-leveraged operational efficiency. Further, addition of new capacities at existing ports, including Dhamra and Mundra, as well as new ports under development such as Ennore, Kattupalli and Vizhinjam, will provide a solid platform for further growth in the ports business," says Karan.

However, despite being the leader in the ports sector, the company is facing the challenge of shrinking margins and rising costs with the rates remaining constant. To tide over this, it has started offering additional logistics solutions to customers to command a premium in comparison to competition. The other challenge is talent shortage and, to address this, it has developed internal talent development programmes and multi-functional training workshops to push its executives into development roles to help them develop into all round leaders.