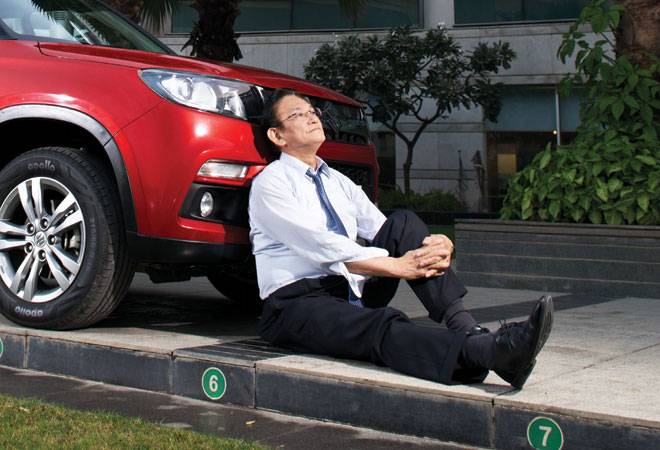 There have a series of successful launches of new models, with the last two, Baleno, a premium hatchback, and Vitara Brezza, a compact SUV, having bagged enough orders to be considered 'sold out' for this financial year. Brezza has become leader in its segment within just 10 months of hitting the market. Two other models launched during his tenure, Ciaz and Ertiga - both of them 'mild hybrids', employing electrical power for several tasks usually needing fuel - are leaders in their respective segments, too.

In July 2015, the company rolled out a separate sales network, NEXA, for its premium variants, complementing its existing network of 2,000 showrooms, which has already sold over 150,000 cars - more than the combined sales of General Motors, Volkswagen or Ford in India. Around 125 NEXA dealerships have been given out, with each one of the futuristic outlets being developed at a cost of at least Rs 25 crore.

But the two areas where Ayukawa has made the biggest difference are industrial relations and technology.

Ayukawa took over barely 10 months after the worst labour violence in Maruti's history - when workers on the rampage with iron rods and wooden sticks at its Manesar plant set then HR manager Avnish Kumar Dev's office on fire, burning him to death, and seriously injured another 100. In 2011, Maruti had seen a 59-day strike. Coupled with the violence and subsequent closure in July 2012, Maruti's market share fell to an all-time low of 38 per cent.

Personally selected by Suzuki patriarch Osamu Suzuki to restore normalcy to the Indian operations, Ayukawa has ensured complete industrial harmony. There has not been even a single instance of strife during his tenure so far - a formidable achievement considering the company's mammoth workforce of 20,000 who manufacture 1.5 million vehicles a year. "He struck a conciliatory note from the time he took over," says Kuldeep Jhangu, General Secretary, Maruti Udyog Kamgar Union, the older of Maruti's two unions, comprising mainly workers at its Gurugram plant. "He takes direct feedback from us on every issue." 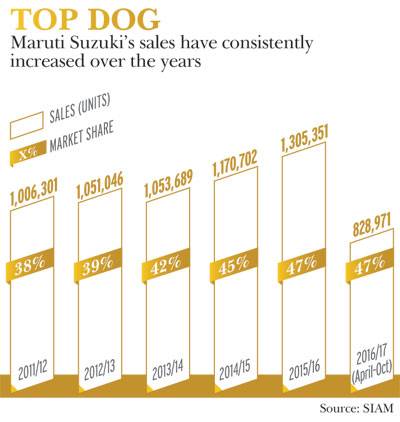 Not surprisingly, unlike earlier CEOs, Ayukawa spends half his time on the shop floor. Such is his rapport with the workers that they are willing to go the extra mile for him. In May this year, a blast at the factory premises of Maruti's biggest supplier of car air conditioning components, Subros, brought production to a standstill. Ayukawa persuaded the workers to take their annual two week earned leave right away, which gave Subros time to recoup its losses and restart supply. "It was the support of our workforce that enabled us to make the adjustment," says Ayukawa. "Most had planned their holidays at different times, but they understood the importance of cooperating, especially when customers were eagerly awaiting the new Brezza SUV." Ayukawa changed his own week-long holiday plan as well.

The other major transformation is in the growing emphasis on cutting-edge technology. Though it has dominated the market in automobiles for over three decades, Maruti Suzuki was never a technology leader. Ayukawa, realising this lacuna could affect future growth, has sought to marry technological advance with Maruti Suzuki's age-old emphasis on affordability. Perhaps he was influenced by the fate of Suzuki in the US - where the American Suzuki Motor Corp (ASMC) filed for bankruptcy and stopped selling vehicles in 2012 in the face of increasing competition. Ayukawa had worked for ASMC from 1997 to 2000.

He has ventured into affordable automatic transmission variants of well-established models such as Alto, WagonR, DZire and Celerio, without compromising on their fuel efficiency. Increasing focus on safety, he has introduced variants with dual airbags and anti-lock brakes in most of Maruti's models. An R&D centre is being built in Rohtak with an investment of Rs 2,500 crore. Most importantly, for the first time in Suzuki's history, he has empowered Indian engineers, led by C.V. Raman, to develop new vehicles.

Both Baleno and Brezza have been developed entirely in India. Baleno is even being exported to numerous countries, including Japan. "Baleno was very helpful in changing the image of our company," says Ayukawa. "Its development began four years ago. We have to continue this kind of effort. It takes about three to four years to come up with a breakthrough product. Right now, we are working on products that will be launched in the next three to four years. Continuity is very important. We may well keep developing models here and selling them globally, including in Japan. We want to take on this challenge."

A law graduate, who loves reading and golf, Ayukawa, 60, has been with Suzuki since 1980. He is the first Maruti Suzuki CEO who also has experience of serving in Pakistan, where he was MD of Pak Suzuki Motor Co from 2004 to 2008. He maintains his Pakistan stint is helping him considerably in India. "People of both India and Pakistan are honest, sincere and kind," he says. "But their attitude to you will depend on how you approach them. That is common to both countries, despite the unfortunate history between the two after Partition. I have found it easy to establish personal relationships in both places." Apart from a brief membership of the Maruti Suzuki board, he had no previous experience of India, very unlike his predecessor as CEO, S. Nakanishi who spent more than 30 years in this country. "Nakanishi is like my big brother in the company," Ayukawa adds. "He gave me a lot of advice when I first came here on how to communicate with Indians, which was very helpful."

"Ayukawa has been like a fresh breeze for Maruti," says R.C. Bhargava, the company's 82-year-old Chairman. "His ability to strike a rapport with workers and understand their psyche has helped a lot. He developed close links with the union representatives and spends long hours on the shop floor."

Ayukawa wants to increase production from the current 1.5 million vehicles annually to 2.5 million, in effect accounting for a third of Suzuki's global production. The company's third plant, coming up at Hansalpur, Gujarat, will have an initial capacity of 250,000 units. "Ultimately, we plan to make around 1.5 million units annually in Hansalpur alone, but that will take some time as the Indian market grows," says Ayukawa. He expects the SUV segment to strengthen rapidly, while forever remaining alert to the growing competition even in the hatchback segment - where Maruti has long ruled - from the likes of Renault's Kwid. "We have to prepare and align a product to overcome the challenge from Kwid and other new generational products," he says. "We have to compete. But this is the situation in every industry. We have to surprise our customers with new offerings - innovations in design, in performance, price, shape and size of our vehicles."

He continues to exhort his Indian engineers to focus on products that can compete globally. "Maruti is No. 1 in India, but Suzuki is not in the same position globally," he says. "If we can raise our quality standards to compete with the best in the world, we will be strong players in the passenger vehicle segment around the world." He has already outlined the new areas for them. Hybrids and electric vehicles will be a major focus with the former going beyond the 'mild hybrids' to those which can go fully electric if required. Crisper designs to attract buyers are also in the making.

Maruti's stature in the automobile market can be gauged from the fact that, at any time, seven of its models are in the top 10 bestselling car list. The demand is so high that the parent Suzuki Motor has advanced completion of the Hansalpur plant by six months to January 2017 to provide the Baleno hatchback to Indian customers. Maruti is so starved of capacity that almost half its portfolio is on the waiting list in some part of the country or other.

Ayukawa is supremely confident of touching the 2-million sales mark by 2020 or even going higher. More than 15 new Maruti models are scheduled to hit the market by then.

Despite its large base, Maruti remains among the fastest growing auto manufacturers in the country even as it matches global peers on high acceptance amongst Indian customers. The company perennially tops the JD Power auto surveys. "Maruti is always a yard ahead of its competitors who have failed to imitate it on product life cycle and customer aspirations," says Wilfried Aulbur, head of auto consultancy firm Roland Bergers Asia Automotive Practice. "It does not just make smart mobility like the hugely successful mild-hybrid in the Ciaz sedan, but also trims cost, which makes it stand out among carmakers."