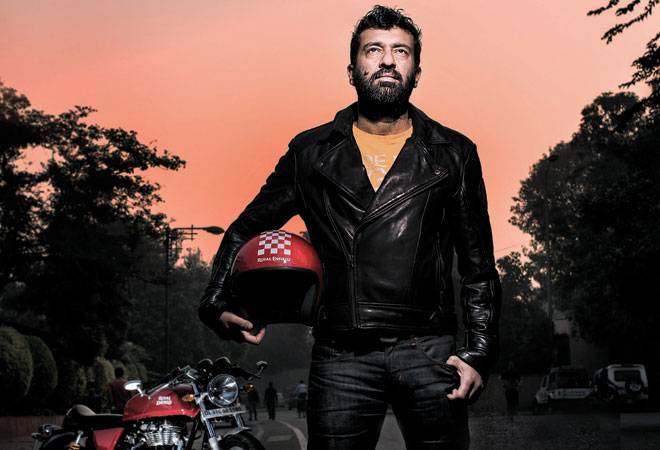 Siddhartha Lal, MD & CEO of Eicher Motors, wants to create a global brand. And, going by the diverse appeal of his Royal Enfield motorcycles, now sold across five continents, his ambition may not be out of place.

This comes after he generated enormous wealth for his investors - each share clocked Rs 26,601.95 at its peak on 29 September, from a mere Rs 17.50 when Lal took over in 2001. The stratospheric level of Eicher's share price comes on the back of a gush of profits that zoomed 10-fold to Rs 1,230 crore, lifting its EBITDA margins to 28.3 per cent. This is more than a turnaround for Eicher, which booked as little as Rs 125 crore profits just five fiscals ago.

The overflowing chest has augmented Lal's global pursuits - he has already moved base to the UK in 2015 to incubate next generation technology. The first outcome of his move - 'Himalayan', a 411-cc air-cooled four-stroke tourer - has already created transcontinental ripples. Just a few months into its debut in Columbia and Australia, Himalayan already accounts for 10 per cent of the companys exports in the current fiscal. And it is yet to enter Europe, potentially the largest market.

It sold just 25,000 motorcycles till 2005, compared to almost 500,000 units in FY15/16. "We want to emerge as the world's No. 1 mid-sized motorcycle company - with a global brand - for long leisure rides, something like Himalayan has fairly achieved overseas," Lal told Business Today on the phone from his new office in Leicestershire, London, which is the epicentre of his global ambitions.

Besides moving to London, he has infused fresh blood into the top management. Many of them - such as his new President at Royal Enfield, Rudratej Singh - come from Unilever. He also hired Rod Copes, a former Harley-Davidson manager, to head North America operations. He is also laying more focus on newer areas of revenues like branded Royal Enfield merchandise that will ideally drive revenues in the next decade, besides not ruling out opportunities of growth from fast-growing categories like scooters.

His performance has already reaped him the prestigious BT Best CEO awards, with the jury awarding Lal the award in two categories - best automobile company, and best small company (across sectors). This is the second year running that he has achieved this feat. The reason is simple. He had the courage to trim his portfolio in 2000 when he was just 26. He divested 13 group businesses and put all resources behind Royal Enfield and Eicher Trucks. For Lal, it was a choice between sharpening focus to go global, or remaining "a mediocre player in all the 15 small businesses we had at that point in time". He chose the former, and invested in it, and it has been a swashbuckling ride. For perspective, Lal draws inspiration from global brands like Porsche and Mini, which he says are focused and stick to their core DNA.

Motorcycles have been the forte of Royal Enfield, and robust demand continues even during the current cash crisis. It is likely to boost the brand's valuation and enable it to continue the ride even as the two-wheeler segment faces huge decline owing to the cash-starved market.

Lal says global operations currently contribute around 5 per cent of the company's total revenue. "We see good potential and it can grow substantially. We have a great market in India, which will drive us for the next decade, but we have to tap the emerging markets for the massive opportunity of mid-sized, long-distance leisure biking," he adds.

The company has started operating stores in Indonesia, Thailand and Philippines in South-East Asia, and now in Colombia, after establishing a footing in developed markets like the UK, Europe, Japan, and Australia over the decades.

Company Director R.L. Ravichandran, who has been with the company for more than a decade, says: "Siddhartha has taken Royal Enfield to new levels. His passion helped us develop a new engine in 2009/10, which was an inflection point for volumes that grew at a CAGR of 54 per cent from CY10 to FY15/16."

So, what is driving Lal to take the company to the next level, which also operates the truck and bus division VE Commercial Vehicles? He had roped in Swedish trucking giant Volvo for technology, which has resulted in windfall gains in terms of market share in the medium to heavy vehicles segment, currently at 34 per cent.

He senses a great opportunity in new reforms like GST, demonetisation and even the new BS-VI norms (coming in 2020) where telematics in new-age vehicles will change the logistic market. "Our strive for latest in technology will shine in the new India. We have put modern trucking systems like the new Pro-Series trucks from Eicher Volvo that will drive cashless logistics and transform the total CV business in India. Also, the giant leap in safety and emission norms will bring a level playing field for all companies as we emerge among the top three automotive markets in the world," says Lal.

Its 50:50 joint venture with Polaris Industries Inc. of the US to design, manufacture and market personal vehicles has been tepid so far. The first product, Multix, a family-to-business transport vehicle that can even generate electricity for household needs, is now available in 60 locations across eight states. "It will be a game changer in times of modern retail and our way to success in the highly competitive transport sector, bringing unparallel efficiency and faster turnaround to change value preposition for Indian customers," he says.

The world's fastest-growing motorcycle company is now looking at new areas of growth. As part of its focused thrust on international markets, Royal Enfield showcased Himalayan at Gaikindo Indonesia International auto show in August 2016. Marking a significant milestone, the company opened its flagship store in Milwaukee, North America, in September 2016. Two exclusive stores were also added in Europe in October 2016, one each in Barcelona and Valencia in Spain.

"All our key projects on capacity and product development are progressing as per plans. We held the ground-breaking ceremony of our third plant in Vallam Vadagal, Tamil Nadu, which will take our annual production capacity to 900,000 units. Our technical centre in the UK is in advanced stages of development and should be operational by end of 2016/17. That will complement our Chennai technical centre," says Lal.

That is all very fine. But as long as he takes care to build evocative motorcycles, Royal Enfield will likely continue to cruise.

Airtel gears up for 4G war to counter Jio challenge