Reaping what it sowed

Suresh Goyal, Chairman and Managing Director of StarAgri Warehousing and Collateral Management, has two BlackBerrys that ring incessantly. Between calls, he meets people and chews paan. He credits his initial success to ICICI Bank, which was looking for agricultural loan seekers in Rajasthan in 2004, to meet priority lending norms. 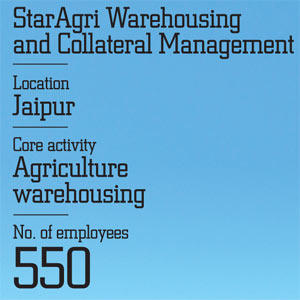 The bank, however, had realised that lending directly to farmers was risky, as they lacked collateral. It appointed service providers such as Goyal to lend money against farmers' produce. By 2006, Goyal and his partners in Jaipur - Amit Mundawala, Amith Agarwal and Amit Khandelwal - were doing significant business with the bank and soon found other banks knocking at their doors, too. StarAgri, which was formed with a capital of Rs 5 lakh, today has a turnover of around Rs 100 crore.

StarAgri takes orders from around 375 food processing companies, including Cargill India and Archer Daniels Midland, and meets them by buying from farmers and mandis (wholesale markets). Its 15 labs ensure purchases meet client-specifications.

It provides warehousing services, too, for farmers who want to store their produce. Farmer Babu Lal Mali of Bawri village near Jodhpur says StarAgri's storage has boosted his income. "There's no pressure to sell immediately after harvesting," he says.

StarAgri's 800 warehouses can store 1.2 million tonnes. "The plan is to treble the capacity in three years," says Agarwal. The company owns five warehouses and leases the rest. Goyal says leased warehouses can offer only limited solutions. "We will have around 15 of our own warehouses soon," he says.