It's a 1894 masterpiece that blows you away. Majestic staircases, gurgling fountains, expansive spaces, custom-crafted Venetian chandeliers, rare antiques, priceless statues. Taj Falaknuma Palace, Hyderabad, screams Nizami splendour. You even arrive like a royal - on a horse-drawn 1890s carriage painted in gold and ascend the pristine white marble staircase showered with rose petals. And it feels good to know that the palace has hosted eminences such as Prince Charles, Microsoft boss Satya Nadella and Bollywood badshahs Amitabh Bachchan and Shah Rukh Khan.

Nearly 120 km from New Delhi, at Neemrana Fort-Palace, there is sunlight on what were once broken columns. A sprightly Aman Nath critically surveys the renovation work at his flagship palace-hotel, a fort built in 1464 that became the third capital of the descendants of Prithviraj Chauhan III. The hotel is being redone in parts. It's a weekend and occupancy is full. Nath, a historian, author of 17 books and adman who doubles up as architect and an interior designer too, has breathed life into a part of India's crumbling heritage by converting these properties into hotels. "When you walk into a Neemrana hotel, you walk into history," says Nath, who manages the 24 Neemrana 'non-hotel hotels; the Neemrana chain was founded in the early 90s by him and another history enthusiast, Francis Wacziarg. 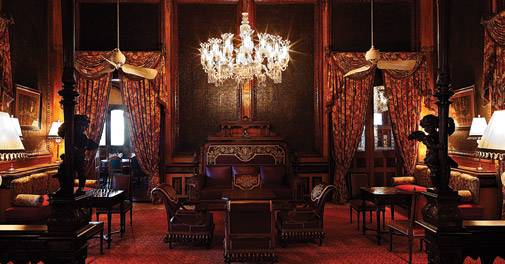 This is no cookie-cutter, five-star hospitality. Steeped in history and dipped in culture and royal traditions, tens of centuries-old palaces, havelis and hunting lodges of our ancient land have been resurrected, revitalised, and turned into money-making ventures that offer experiential luxury - combining the charms of the old with the comforts of the new to create "timeless luxury".

"Palaces give us a differentiating edge. From top line and purely commercial point of view also, palaces make a lot of sense," says Chinmai Sharma, Chief Revenue Officer, Taj Group of Hotels Palaces Resorts Safaris. Taj has eight of the country's most opulent palaces in its portfolio where tariffs for regular rooms are upwards of Rs45,000 a night. "The world over, heritage structures are used as museums, and people rarely get an opportunity to stay in one," says Manish Gupta, General Manager, Taj Rambagh Palace, Jaipur. Rambagh has hosted Prince Charles, His Holiness the Dalai Lama, billionaire Nicola Bulgari, footballer Zinedine Zidane, and American singer-songwriter Katy Perry (and that's just to name a few).

Palace hotels are intimate properties with 50-80 rooms. That's a far cry from the 500-room newly-built five-star hotels. But their high yield (rent per room per night) makes up for that. Room rents can be lakhs for an edgy, drop-dead beautiful palace room during peak tourist season. 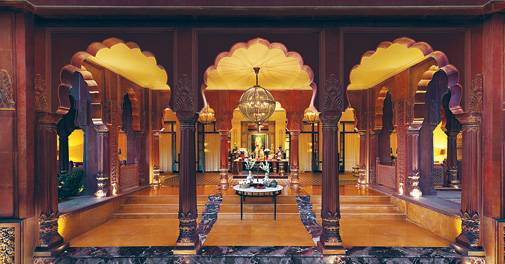 "Our clients have healthy budgets. . They seek hotels that have character and high standards of service. Palaces fit the bill," says Rajesh Khanna, Executive Director, Sales & Marketing, Abercrombie & Kent (A&K). Palaces are a key focus area for A&K, an inbound travel company. Khanna says a decade ago, palace hotels were lagging in services. "Today, they have raised the bar for luxury," he says.

"Heritage hospitality should not be an excuse for bad hospitality," agrees Lakshyaraj Singh Mewar, Executive Director of Historic Resort Hotels (the HRH Group), India's only chain of heritage palace-hotels and resorts under private ownership. Mewar, the scion of the House of Mewar, Udaipur, is a third-generation heritage hotelier. "We had to adapt and convert our palaces into hotels as they had become white elephants," he says. HRH operates 10 hotels in Rajasthan.

The effort and costs involved are huge. The fact that these palaces were not built for air-conditioning, and the difficulties involved in fixing things such as electricals and plumbing, makes outfitting these -- and that too without ruining the place -- an expensive and painstaking affair. At times, creating an exact copy of the interiors involves a huge expense. "We have to do our mathematics and projections meticulously," says Mewar.

It took three years to restore the unconventionally curated Narendra Bhawan Bikaner, the former palace-residence of Narendra Singh, the last maharaja of Bikaner. With Bikaner's history dating to 1488, the palace hotel saw a soft launch in December 2016. 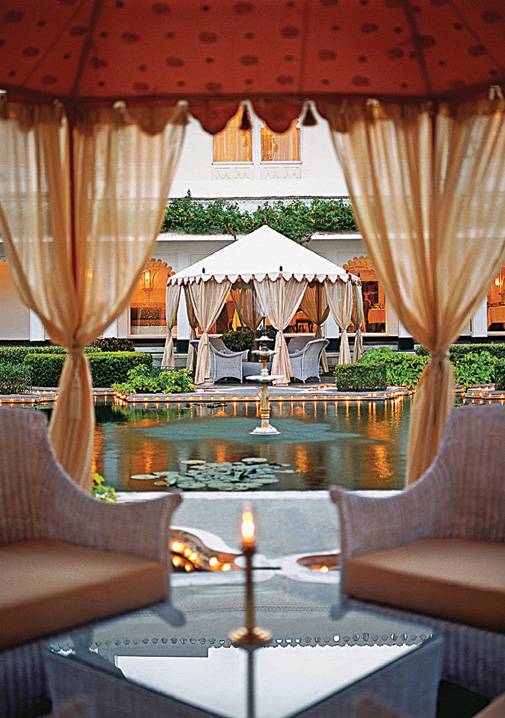 Karan Singh Vaid, President, MRS Hotels, which has Narendra Bhawan, Bikaner, and Laxmi Niwas Palace, Bikaner and Suryagarh, says they have revived the maharaja's lifestyle. The hotel enjoys a high occupancy despite rents of Rs12,000-40,000 a night. He says they will earn the equivalent of their investment in half the time-frame that they had projected.

Aman Nath has taken up the most challenging of properties built in the 14th-15th centuries. "Neemrana Fort-Palace and our latest project at Tijara are a huge madness," says Nath. With Neemrana, Nath and his friend and business partner, the late Francis Wacziarg, recovered their Rs30-37 lakh investment in two years. He says everything was inexpensive back in the 80s and early 90s as compared to today. Titanic actor Kate Winslet has docked here twice. "We are a zero debt company and enjoy healthy occupancies," says Nath. To date, he has been forced to shut only two hotels. Nath, who hand-picks art, antique furniture and accessories for his hotels, says his hands-on approach lowers expenses. Still, room rents at the Neemrana Fort-Palace can be as high as Rs30,000 per night. "Restoration work demands crores of rupees and sometimes takes multiple years," says Taj's Chinmai Sharma. Taj Falaknuma Palace, Hyderabad, reopened in 2010 after 10 years of mammoth restoration. Princess Esra, the first wife of the last Nizam of Hyderabad, took a keen interest in the restoration of the sprawling 32-acre property that now offers 60 opulent suites. Ritesh Sharma, General Manager of Falaknuma, says the palace's carpet restoration alone took over three years. The fabrics in the palace are over 70 years old and were imported from Europe. It took almost four years to restore the fabrics to their original splendour.

Taj Lake Palace, Udaipur, was restored over six years with help from old paintings and photographs. Nayan Seth, the General Manager, says the restoration started in 2000 with Garth Sheldon, a Singapore-based architect for Architectural Restoration Consultants. The restoration of another property, Taj Rambagh Palace, Jaipur, built in 1835, took 17 years. Manish Gupta of Rambagh says: "The heritage structure posed issues in upgrading to new technologies, so we found ways to upgrade without destroying the heritage." Spaces were altered and so 104 rooms became 78; zardozi furnishings and gold-leaf frescoes were added on walls and ceilings, so was period furniture.

Recovering investments in heritage hotels is a long-term process. The thumb rule is that conventional hotels recover their investments in 15-18 months while heritage hotels take double this time. "The expenses are higher and rooms are less," says Vaishnavi Kumari of the Kishangarh family of Rajasthan. "A sizeable investment, made from personal funds, has gone into the restoration of our palaces," she says. However, liabilities have been turned into assets and the family's properties, Roopangarh Fort-Palace and Phool Mahal Palace Hotel in Kishangarh and Kishangarh House in Mount Abu, rescued from being reduced to rubble.

There are other challenges too. Some heritage properties see a dramatic fall in occupancy during off-season. For instance, ITC's WelcomHeritage properties notch 80 per cent occupancy in peak season but some smaller hotels report zero occupancy in off-season. WelcomHeritage hotels in Jaisalmer and Himachal Pradesh even shut down for a few months in the year. Sunil Gupta, Chief Executive Officer, WelcomHeritage, says this makes it hard for a palace hotel to get decent returns, though tariffs in some hotels are high. WelcomHeritage palaces - including WH Bal Samand Lake Palace in Jodhpur and WH Noor-Us-Sabha Palace in Bhopal - command Rs25,000 to Rs30,000 for a night. A night at the Kasmanda Palace in Mussourie can set you back by Rs14,000-35,000. Occupancy, at least for the bigger players, is not a challenge. Occupancy at Taj's palaces is more than 60 per cent in a year. "That's the advantage of having a smaller inventory," says Sharma. "Our palaces have never felt the pinch of low occupancies," says Chinmai Sharma. He says in high season the rooms can command $800-1,000 per day. In low season too, the tariffs don't fluctuate much.

Cash registers ring even louder when these hotels are taken over for ultra glamorous destination weddings. The Taj palaces can command anything upwards of Rs2 crore for a two-day affair. Taj has in the past hosted celebrity weddings of Elizabeth Hurley and actor Salman Khan's sister. "We stated promoting destination weddings back in 1988 and were taken to be fools. Today, this segment has grown into a booming business," says Singh of HRH.

"The experience provided by a palace hotel is unique and cannot be replicated at any city hotel," says Rajesh Khanna of A&K. A&K's special itinerary, Taj Mahal & the Treasures of India, revolving around Taj's palace hotels, is a best-seller. Between January and December 2017, A&K will take 40 groups on this tour, priced upwards of $8,695 per person.

Khanna recalls guests being bowled over by the Maharajah Welcome at Taj Umaid Bhawan Palace, Jodhpur: a vintage car pick-up from the airport, a short ride up to the palace porch in a horse-driven carriage, a symphony of drums and trumpets, a shower of rose petals and a performance by ghoomar dancers as guests step into the spectacular lobby. Quips Mehr Navaz Avari, General Manager, Umaid Bhawan Palace: "We give guests a taste of Indian tradition mixed with authentic local experiences." 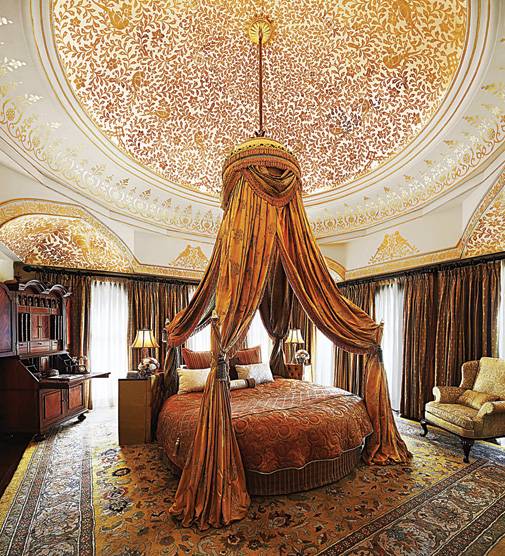 Palace hotels are skilful at offering out-of-the-box experiences. Take, for instance, Narendra Bhawan's sundowners in the desert or a meal by the nearby pond or chaperoned walks through the city.

In Lake Palace, Udaipur, one can dine by Lake Pichola or indulge in a Royal Gangaur cocktail and dinner aboard a huge boat that once belonged to the Maharana of Udaipur. At Umaid Bhawan, one can partake of the chef's studio experience, curated by Gaj Singh himself, which takes guests through the paces of cooking traditional Rajasthani delicacies.

A lot of the success of the palace experience can be attributed to the impeccable staff that's often hired locally and trained in the protocols of the palace. At Rambagh Palace, the butlers work on the same traditional concept of the aide-de-camp. "At Falaknuma, our palace butlers are trained as knowledgeable hosts", says Chinmai Sharma. In Narendra Niwas, Vaid has created the right vibes by infusing the service with the ethos of the 'khadimgars' of yore. The service is thoughtful, pre-emptive, intuitive, attentive, yet unobtrusive.

Ancient stones and broken columns have become lucrative. Heritage is regenerating. History is coming alive. What more can one ask for.