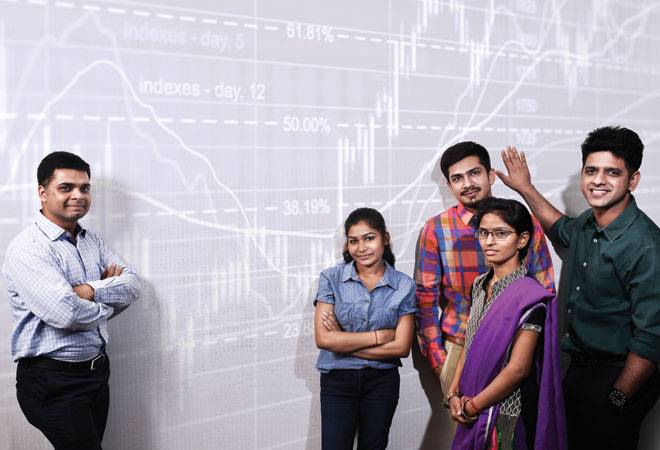 When you enter the second floor of the three-storey Share India office, an East Delhi-based broking firm specialising in proprietary trading, you cannot miss the youth sitting at the farthest right-hand corner. Move closer, and you will see him engrossed in the trading screen on his computer, oblivious of the hubbub around him. Noise does not distract him as he cannot hear or speak. Meet Jagmohan Singh, 24, who lives with his parents and wife, all of whom are suffering from speech and hearing impairment. Still, one cannot write Singh off when he is at work. He is one of the best cash futures traders at the company.

Three years ago, Singh was training at Noida Deaf Society to join a Delhi cafe. But things began to change when Rohin Gupta, a director of Share India, picked him from the institute and offered him formal training in stock market trading. Singh never had any formal education, but the training was thorough, and he currently earns Rs50,000-55,000 a month.

Singh is not a one-off case. Rohin also suffers from hearing and speech impairment. Yet, at Share India, he leads a team of five who cannot hear or talk but manage to make a living by trading in cash futures.

Much of this may sound like bombast as stock market trading is often considered a specialised field requiring highly-skilled workers. In reality, technology has disrupted traditional trading in a big way. Most of the trading activities can be automated while powerful computers track all the data across markets and trade in milliseconds, without any human intervention. Better still, the whole process takes the pain out of execution and throws open the doors to a more diversified workforce who can be easily trained to work in this space.

Share India has adopted this new-age technology, known as algorithm trading, or algo trading, in industry parlance. Simply put, algo trading is an automated process that carries out trading operations across stock exchanges, based on a slew of pre-defined criteria. However, the tech transformation did not happen till 2008 when the Securities and Exchange Board of India, or SEBI, the market regulator, allowed Direct Market Access, enabling stock buying or selling without manual intervention by brokers.

The company started its operations years before that, back in 1993, when it was set up as a retail broking firm. It got into proprietary trading or prop trading in 2006. Two years later, post the global meltdown, Share India felt the need to enter a space that was new and innovative. Algo trading has served that purpose. To date, around 300 people have been recruited to do trading in the stock market. The company has witnessed decent growth and currently accounts for 3-4 per cent of the market share, posting over Rs60,000 crore worth of trades in a month.

"Algo was the need of the hour; otherwise, we would have been marginalised. We started with around Rs10 crore and now run a book of over Rs60 crore," says a confident Sachin Gupta, director at Share India and first cousin of Rohin.

(Sachin) Gupta is not deterred by the fact that regulators all over the world are keeping a wary eye on algo trading as computer algorithms are used for high-frequency trading (HFT) - a controversial practice to trade in and out of assets at incredible speed. Even a single flash trade can wipe out millions of dollars from the market and create huge sentiment deficit.

"The entire world curses algo trading [for these reasons]. But if it were not for the automation software, all the 80 people at Share India would be jobless," Gupta points out.

Not all would blame algo, though, for wreaking havoc in stock markets. Kunal Nandwani, founder of U-Trade, a Chandigarh-based algo software vendor, says, "Algo can help achieve better risk management if implemented properly. Indian markets have comprehensive risk measures in place. On the plus side, the technology is creating jobs for those who may not be able to compete in a cut-throat market."

As for some brokers allegedly getting preferential access through the co-location facility of the National Stock Exchange (NSE), early login and dark fibre - which allows a trader a split-second faster access to data feed, resulting in huge gains - many say that the technology is not to blame.

"What happened there could not have been possible without human intervention. Getting special access to the back-up servers would not have been possible unless someone provided it from the exchange. The Internet protocol (IP) address is like a telephone number and unless you dial the right number, you cannot get access," says an industry veteran on condition of anonymity.

Gupta, too, believes safety is the key to survival. At Share India, all trades get auto-settled before end of the day, and no position is left open. There is a risk management system in place to ensure that any loss beyond Rs30,000-50,000 in a day is highlighted and the particular terminal gets automatically switched off for the day. "It rarely happens as the losses are closely monitored. But we have the safety parameters in place as one wrong move can put us out of business," he says.

If Gupta is to be believed, the new trading system had helped transform the workforce as well, but not before the company made some mistakes. "By 2008, we had fully adopted the algo software for trading activities. Special skills were no longer required as the execution risk was entirely mitigated by the software and the day-to-day work largely involved tracking price differences in different markets," he observes.

Despite the shift in skill requirements, Share India decided to hire fresh MBAs in 2009, presumably to give the company a makeover, but soon realised it was not a good fit. All new recruits left within a few months. Thereafter, the company has only hired undergraduates and preferably underprivileged people who are eager to be trained and value the job.

One reason why most of the new recruits have stayed on is that the company has paid everyone from day one. During the three-month training period, it pays Rs8,000 a month. Then, the salary is raised to Rs11,000. More important, the firm has thrown its doors open to the underprivileged.

Take the case of 22-year-old Pinky Verma who used to work as a domestic help at Gupta's residence. "I had cleared 12th standard and was looking for a job. When I asked him about a suitable opening, he asked me to join Share India. After two years and a half, I am a trained options trader and often work on the box strategy (selling and buying pairs of different options) and earn Rs13,000 a month," she says.

Neelam Singhal, a postgraduate in economics from Agra University, is another who has found help. "After my husband's death in 2013, I was jobless for two years. I joined Share India in 2015. I am now earning Rs14,000 per month and taking care of my two daughters. I don't know what I would do if algo trading is stopped," she says.

Free training does not hurt the company as it makes more money from the 80 traders (trained in-house) who are on the payroll compared to the 220 traders who use Share India premises and share 20 per cent of their revenue with the company. Share India earns close to Rs10,000-12,000 per month from each of these 220 traders. "None of the 80 traders [on our payroll] is a liability. Even though some do not make money for me, they are not a cost to us as they earn enough to meet the table cost, including electricity, as well as their salary," says Gupta. After deducting all costs, the average earning from each of them stands at Rs30,000-35,000 per month.

For quite some time, Gupta felt that training and employing the underprivileged was a great way of giving back to the society. But in June 2014, when he met Manish Kumar and managed to convince the latter not to take his own life, the realisation dawned how algo trading is making a big difference for many families. A graduate from Bihar, Kumar was doing odd jobs and living in a rented apartment in Delhi with his father, a tailor by profession, and mother, a homemaker. But there was no regular job in sight, and a frustrated Kumar wanted to end his life when Saurabh Gupta, a trader with Share India for the past 12 years, got him to meet Gupta for a job opening.

"Every time, it is not about money," says Gupta. "He (Manish) is an average trader and did not do well in cash futures. So, we have put him in options trading. He is not making big money, but a monthly salary of Rs13,000 makes some difference."

Neetu Mathur, a mother of two who stays close to Share India's office in Karkardooma, now earns more than her husband, a cameraman at a nearby video parlour. "If it is not for algo trading, it would have been difficult to find a good job that would suit my timings. Here I can leave office after 4 p.m. to be with my family," she says. "Also, I am solely responsible for any profit or loss, and that puts the onus on me. Stock trading jobs are often undervalued, but it has given me the confidence that we are also making meaningful contributions."